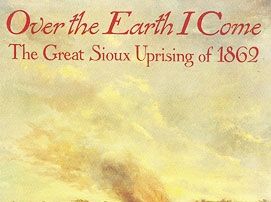 Stolen Land
After 33 years living in the same house, we moved to a town named Savage. We live on stolen land.

From Tierra del Fuego to Ungava Bay
the history of betrayal continues to today
the spirit of Almighty Voice, the ghost of Anna Mae
call like thunder from the mountains—you can hear them say
it’s a stolen land
Bruce Cockburn,”Stolen Land”

Savage is located south of Minneapolis, which was named by combining the Dakota Sioux word for water (mmi) and the Greek word for city (polis). Until the 17th century, the only residents in the area were various bands of Dakota Sioux. Our home is 18 miles from Fort Snelling, which was built in the 1820s on the bank of the Mississippi in an attempt by the Federal government to encourage white settlers to move into the area. 80 miles in the other direction is New Ulm, settled in 1854 by German families, one of which founded the August Schell Brewing Company in 1860. New Ulm was the setting of a fearful battle in Sioux Uprising of 1862. Eleven miles from Savage is the town of Shakopee, named after the chief of a band of the Mdewakanton Dakota nation. Savage is in Scott County, and the county directly to the west, Sibley, is named after a commander of the Minnesota militia that was sent to fight the Dakota in the Uprising.

Apartheid in Arizona, slaughter in Brazil
if bullets don’t get good PR there’s other ways to kill
kidnap all the children, put ’em in a foreign system
bring them up in no-man’s land where no one really wants them
it’s a stolen land
Bruce Cockburn,”Stolen Land”

Lawyers were involved in the purchase of our new home, so it’s all legal. All legal, that is, until you go far enough back in time and discover that the land was essentially stolen from the Dakota by white European settlers.

I am aware of the arguments that say the settlers were merely defending their lives and land in the Uprising: that there were treaties deeding the land to settlers signed by Dakota chiefs, that the first open hostilities in the Uprising of 1862 were perpetrated by young braves, that attacks on homesteads included torture and the slaughter of infants and women. That was the story I learned in school. When the full history of the period is considered, however, a far different picture emerges.

Colonel Sibley was not the only person interested in obtaining reinforcements. So, too, was Little Crow. He planned to attack the rich prize that was Fort Ridgely on Friday. His scouts had told him that no new troops had reached the fort, but he knew that reinforcements must surely be on their way. He was certain that Friday would be his last opportunity. If he did capture the fort then, the war would be lost.

To take it, however, he needed more braves. His hundred warriors had not been enough. He wanted the men of Shakopee and Red Middle Voice. They were the ones who had wanted the war in the first place, the ones who had argued for it with such passion at his house only the previous morning. They were the ones who had shamed Little Crow into leading it. Yet once Shakopee and Red Middle Voice had instigated the war, they had taken no part in it in the one way that might have assured victory. Instead, they had unleashed their braves in small bands to terrorize the settlers. They spurned Little Crow’s strategy, his plan to fight in the white man’s way by attacking the soldiers. They had wasted the chance for an early victory, and now Little Crow did not know where they were.

Little Crow summoned the members of the Rice Soldiers’ Lodge to his village and complained to them about the lack of support from the two war chiefs. The Soldiers’ Lodge, he argued, must join in the attack on Fort Ridgely, and he asked them to find the war chiefs and tell them to send their braves. He sent out runners to the other chiefs of the Wahpetons and the Sissetons to inform them of the time for the assault on the fort.

Over the Earth I Come: The Great Sioux Uprising of 1862 seeks to tell this important story fairly, and it is not a pretty one. I recommend it for several reasons.

It records the history of this sad episode in American history without submitting the story to some political agenda. Over the Earth is history, not ideology. I cannot take responsibility for the actions of the Dakota, but I can, and must take responsibility for the actions and decisions of Washington, DC, and the State of Minnesota. Doing that means I must admit that we committed atrocities against the Dakota, repeatedly broke the treaties we had forced them to accept, stood by as officials, traders and the military, lied to them, and treated them as less than persons made in God’s image.
As a Christian who believes my Lord calls his followers to be agents of reconciliation, I am committed to try to hear the voice of the powerless. Here that means digging deeper than the stories I heard in school. I cannot allow history to simply be written by the victorious.

I believe that my love for my country must not be maintained by closing my eyes to the failures of my nation. The Holy Scriptures present Abraham, Joseph, and David as heroic characters but is also unstinting in revealing deep flaws in all three. If we are to be agents of justice now, we must be willing to learn from the past, even when that learning might be painful or embarrassing.

Over the Earth I Come is accessible as a book of history, written so as to seem almost like a novel. It tells a story all Americans should know because the Sioux Uprising of 1862 is, whether we like it or not, part of our story. It tells of the Uprising, what led to it, and what flowed out as a result. The ripples continue to this day, some for blessing but most for curse.

By the way, the City of Savage was not named after anything involving this episode in the past. Formerly known as Hamilton, it was renamed in honor of Marion Willis Savage who owned a racehorse, Dan Patch, who never lost a race and broke speed records 14 times during his career. Kind of disappointing, I know, but there it is.