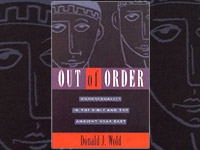 Few topics are as polarized in our post-modern world as the question of homosexuality, and Christians are often poorly equipped to discuss the issue winsomely with those who have become convinced that committed homosexual relationships are permitted within a biblical understanding of marriage. “The attitude of personal antipathy towards homosexuals is nowadays termed ‘homophobia,’” Rev. Stott writes.

It is a mixture of irrational fear, hostility, and even revulsion. It overlooks the fact that the majority of homosexual people are probably not responsible for their condition (though they are, of course, for their conduct)… No wonder Richard Lovelace calls for “a double repentance,” namely, “that gay Christians renounce the active lifestyle” and that “straight Christians renounce homophobia.” Dr. David Atkinson is right to add, “We are not at liberty to urge the Christian homosexual to celibacy and to a spreading of his relationships, unless support for the former and opportunities for the latter are available in genuine love.” I rather think that the very existence of the Lesbian and Gay Christian Movement is a vote of censure on the church.

At the heart of the homosexual condition is a deep loneliness, the natural human hunger for mutual love, a search for identity, and a longing for completeness. If homosexual people cannot find these things in the local “church family,” we have no business to go on using that expression. The alternative is not only between the warm physical relationship of homosexual intercourse and the pain of isolation in the cold. There is a third option, namely a Christian environment of love, understanding, acceptance, and support.”

Same-Sex Partnerships? is, as is to be expected from the pen of Dr. Stott, clearly written, balanced, and biblical. This booklet is a revised version of a chapter in Stott’s two volume work Involvement which was published by Revell in 1984.

Same-Sex Partnerships? is a book we recommend to you.

Further Reading
“The Holy War on Gays” by Robert Dreyfuss in Rolling Stone (March 18, 1999) pp. 38-41. “The Christian Right is on a new mission: to drive homosexuality back into the closet,” the subtitle to the article says, and the author promises to take the reader into “the war rooms of evangelical intolerance.” An overview of efforts by Christian Right leaders such as James Dobson, James Kennedy, the Family Research Council, Pat Robertson, and the National Pro-Family Forum to address homosexuality in the public square, articles such as this are essential reading for Christians who take faithfulness seriously. Christian discernment in a pluralistic culture includes asking how we can live out and communicate the truth clearly and with humility while living among those who do not share our deepest convictions. If nothing else, “The Holy War on Gays” suggests we are far more reactionary than discerning, and perhaps in danger of winning a battle only to discover we have been mistaken as to the identity of the enemy.

Someone I Love is Gay: How Family and Friends Can Respond by Anita Worthen and Bob Davies. A warmly personal and practical book by two Christians who have dealt first-hand with the issues involved. Anita Worthen works with New Hope Ministries, an ex-gay ministry to family members and friends of gay people. Bob Davies is executive Director of Exodus International, a network of agencies for men and women seeking freedom from homosexuality.