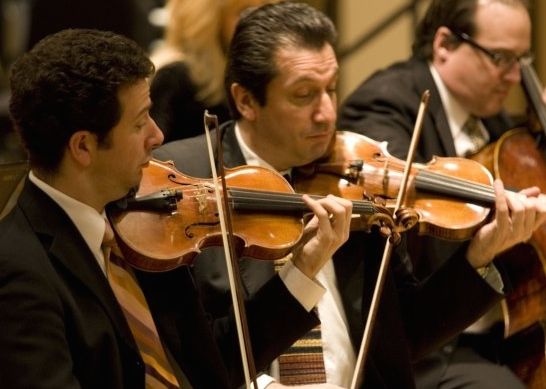 We drove to the Twin Cities last night (in a light snowstorm) for a concert by the St Paul Chamber Orchestra (SPCO). The traffic on the highway was slower than usual and the plows were out, but we had allowed extra time.

We’ve grown to love the SPCO and last night’s performance was one we’d anticipated eagerly. The program featured two composers. The first was Antonio Vivaldi (1678-1741) and consisted of his justly famous concertos named The Four Seasons (1725). The SPCO played them in order—Spring, Summer, Autumn and Winter—each concerto featuring a different SPCO violinist in the solo part. The second composer on the program was John Cage (1912-1992). The piece chosen was his String Quartet in Four Parts (1950), the four movements interspersed with the Vivaldi compositions—“Quietly Flowing Along” (summer), “Slowly Rocking” (autumn), “Nearly Stationary” (winter) and “Quodlibet” (Latin, meaning what you please, evoking spring). Four members of the SPCO formed the quartet, sitting apart from the rest of the orchestra. It was a beautiful performance and a stimulating program of strikingly contrasting approaches to music.

The Four Seasons is arranged for solo violin, harpsichord and strings, so on stage in the midst of the orchestra was a harpsichord. This one is painted a gentle pale green, and the interior gold with red trim. On the underside of the lid, raised for the concert, Latin script spells out, Omne Quod Spirat Laudet Dominum. I wondered what it meant so at intermission looked it up. It is from Psalm 150:6, the final verse in the psalter: “Let everything that breathes praise the Lord.”

Turns out Layton James, who retired in 2011 after being principal keyboardist in the SPCO for 41 years, built the instrument. He also serves as music director in a Lutheran Church, and that perhaps has something to do with his choice of text.

As the orchestra played each concerto, you could see members of the quartet following along with the music, smiling, involuntarily moving as if they too were playing. I did not notice that any of the orchestra members did the same as the quartet played Cage’s composition. It was also noticeable that the audience was openly restless while Cage was played. Cage is famous for developing methods of composition based on chance, “minimizing,” the program notes said “the role of the composer as the all-important driver of self-expression.” Any expression of humility is admirable in a world that is sick unto death from self-centeredness and pride. Cage’s music is less well known, and is difficult for most people to appreciate except on a formal level. The stark sounds, often discordant and harsh, evoke reminders of darker memories in the unrelenting passage of time. The evening was a good reminder that the point is not whether we like a piece of art but whether we get it.

The concert, with its bold contrast in the music of Vivaldi and Cage, demonstrated the power of convictions and values, demonstrating once again that what we believe and how we live in light of those convictions and values really matters. After the concert I walked out into the cold night air glad the SPCO had included both Cage and Vivaldi in the program. The two composers’ integrity in pursuing their convictions, translating them into art, and their courageous willingness to push against the popular expectations of their day provide a glimpse of the likeness of God in which both artists were made.

It is true that all that has breath should praise the Lord. I do not know whether either composer wrote these compositions intentionally, consciously pursuing this end. But last night their music prompted me to praise, and for that I am grateful.