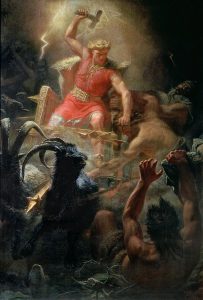 Some of the most popular films today depict ancient pagan gods as superheroes. The Avengers (2012), for example, directed by Joss Whedon, one of our best storytellers, features the Norse gods Thor and Loki. The year before, in Thor (2011) Anthony Hopkins played Odin the all-father of the gods who exiles Thor from Asgard to earth where he becomes earth’s defender. It’s become a franchise, and a whole series of movies based on Marvel and DC Comic characters have appeared, with more in production. On the one hand, of course, this is not necessarily very significant—these stories featuring pagan gods as heroes are only movies. And before that they were only comic books. And they are exciting stories, cosmic in scope with bigger than life heroes who fight for earth against evil forces seeking to destroy humanity. What’s not to like? True enough.

But yet, I sense something more. After decades of trying to keep my finger on the popular culture pulse of America, I tend to believe that there is something deeper transpiring here. I sense a yearning in this storytelling, a quiet yet insistent wistfulness for stories that tell of things greater than we can see or that science can name. I sense a desire to live in an enchanted universe, where reality is more than mere cause and effect in the here and now. This is a desire I understand as a Christian—a world without God or gods is a lonely, cold, uninspiring place.

But, how should I as a Christian talk to my non-Christian neighbors about all this?

Growing up I was taught that Christianity was true and paganism was false, so that would frame any conversation on the topic. In The Weight of Glory, however, C. S. Lewis sees it in very different terms.

Theology, while saying that a special illumination has been vouchsafed to Christians and (earlier) to Jews, also says that there is some divine illumination vouchsafed to all men. The Divine light, we are told, “lighteneth every man.” We should, therefore, expect to find in the imagination of great Pagan teachers and myth makers some glimpse of that theme which we believe to be the very plot of the whole cosmic story—the theme of incarnation, death, and rebirth. And the differences between the Pagan Christs (Balder, Osiris, etc.) and the Christ Himself is much what we should expect to find. The Pagan stories are all about someone dying and rising, either every year, or else nobody knows where and nobody knows when. The Christian story is about a historical personage, whose execution can be dated pretty accurately, under a named Roman magistrate, and with whom the society that He founded is in a continuous relation down to the present day. It is not the difference between falsehood and truth. It is the difference between a real event on the one hand and dim dreams or premonitions of that same event on the other. It is like watching something come gradually into focus. (pp. 128-129)

The old myths should not be treated dismissively, but seriously. They can be enjoyed as stories that have stood the test of time, engaging imaginations over many centuries. And they can be understood as echoes of The Story, the myth that is true.

Our commendation of the faith is not meant to be a debate but an exercise of love. Love for the truth, for the person challenging the truth of the gospel, and supremely for God who created a world in which life only makes sense when seen in the gospel context of creation, fall, redemption and restoration.

This does not suggest that we cannot demonstrate the limitations of human myths and the greater reliability of the Christian gospel. It does, however, suggest we do so with respect and honesty, and in the expectation that our non-Christian friends are right to insist that we not only talk about Christ, but that our lives demonstrate the reality of his presence.

How we speak about the gospel and the alternatives to the gospel always matters, and matters supremely today.

Thor's Fight with the Giants, 1872 (oil on canvas) by Marten Eskil Winge