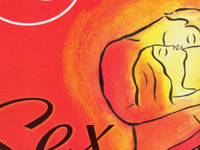 The editor of Discipleship Journal, a bi-monthly magazine published by The Navigators, reprinted a piece by me in their January/February 2007 issue. It appeared in a special section of the magazine addressing various issues on the theme of sexuality. Mine was an article that had originally appeared in these pages and then was posted on Ransom’s web site. I appreciated their request to reprint it in DJ, and was impressed by the care and professionalism exhibited by the editor as we edited the piece down to the number of words they could accommodate.

As subsequent issues of DJ appeared, I glanced at the letters to the editor wondering if my piece would generate a response. My original desire in writing it had been to stimulate Christians into thinking more clearly about how best to engage our world with the gospel. I have no idea who reads DJ regularly, but prayed that God would bring what I had written to the readers of his choice. In any case, if my article generated a response, it didn’t show up in any of the letters that were published. However, something far more fascinating did show up: three letters expressing strong objection to Discipleship Journal’s cover. Here are the letters, as they appeared, unedited except for omitting the names of the correspondents—my intention is that we reflect not on the authors of the letters but on the ideas and concerns they express.

Letter #1 was from Georgia:

I was very disappointed to receive the January/February issue of DJ with SEX in large, bold type on the cover. It is frustrating enough to check out at the grocery store surrounded by magazine headlines about sex. It is even more disheartening when a trusted Christian magazine I subscribe to in my home has such a glaring headline.

I don’t have a problem with the content of the articles; however, you could exercise some discretion in how you headline the topics. I will have to remove the cover of the magazine or hide it from my l0-year-old son. It is a constant battle to raise children with a pure heart; please provide a magazine cover we can be proud to set out in our homes.

Letter #2 came to DJ via email:

I’m shocked, embarrassed beyond belief, and can’t understand what you were thinking when you created your January/February cover.

If you wanted to address the topic of sex, you didn’t have to emblazon it with a fiery red cover, giving it the appearance of a secular sex manual! I would expect a more discrete approach, not something that appears to have come straight from the pit of hell. Couldn’t you have had a single article addressing the topic but kept the focus on Jesus Christ and His teachings? Is it really necessary to have more than half of the magazine dedicated to the topic of sex?

Thanks for the embarrassment. I can’t wait to explain to my husband that we purchased this as a gift subscription for our pastor. Not to mention having to face my pastor next time I see him. I’m tempted to find another church. Color my face as red as your magazine cover.

Letter #3 was from Iowa:

I wholeheartedly approve of the subject of sex being in DJ. Sex needs to be discussed openly in the Christian arena—silence about it has given Satan a stronger foothold in trashing it. So I applaud you for stepping forward with the wonderful articles.

But I was offended by the cover. A couple of weeks before I got this issue, I had a pornography site flood into my computer. That this stuff came into my personal computer unbidden shook me; I felt violated. Then I receive my new DJ and see the word sex boldly written across the cover. Why did you feel you needed to be so blatant with the cover? (I do think that the artwork throughout is beautiful.)

Go for it, DJ—address the issues out there. But please try not to be so worldly about it.

I would suggest this little controversy is not insignificant. It is an example of the sort of tension which arises in the wider evangelical community as Christians explore what it means to live faithfully on the edge of culture and faith. What one believer sees as appropriate, another sees as questionable. What one sees as thoughtful, another sees as unnecessarily provocative. The disagreement also illustrates the power of image—these letter writers are concerned not primarily by the ideas expressed in the articles but by the cover of the magazine. It is the color, headlined word “Sex,” and font to which they object. And finally, the controversy is significant because Christians who disagree over such things are commanded to love one another. To love one another so clearly that their love will act as an evidence to the truth of Christ’s claims. And it is significant because all thoughtful Christians would agree that Christ’s Lordship not only applies to what we think and write about sex and morality, but to the artwork, color palette, and lettering we use on the covers of our publications.

All of which, it seems to me, raises a series of questions that discerning Christians would be wise to consider and discuss.

1. What was your immediate or initial response when you saw the DJ cover? When you read the three letters? Why did you respond that way? Was there a time in your life when you would have responded differently? If yes, why the change?

2. Being as objective and careful as possible, summarize the letter-writers’ concerns. In what ways would you say their concerns are based on good or virtuous desires?

3. If you disagree with the letter-writers’ concerns, do you know Christians who would share them? How do you tend to think of or characterize them? How close are you to them? Do you harbor Christ-like affections for them?

4. If you agree with the letter-writer’s concerns, do you know Christians who would feel the DJ cover is not only fine, but that being concerned about it is silly? How do you tend to think of or characterize them? How close are you to them? Do you harbor Christ-like affections for them?

5. Having upper Midwest roots, I have numerous friends and family who grew up on or live on working farms. Unlike their urban and suburban friends and relatives, sex tends to be for them simply an unavoidable part of ordinary reality. Farms raise animals, animals reproduce, and most animals aren’t very secretive about the process. In fact, farmers usually are involved in the process, so the cycles of breeding, birthing, and weaning are labor intensive, involving not just the farmer, but his family as well. Growing up in this setting, the rural people I know tend to see sex and reproduction not as a secretive, embarrassing category of life but simply as part of the natural order of things. As a result, they tend to be more casual about sex than the attitude expressed in these letters. Or to try to see it from their perspective, when your 10-year-old helps the day a neighbor brings his stallion to breed your mare, or has bred a ewe to raise lambs for the County Fair, or helps during a difficult delivery when a foal is born, the DJ cover does not seem all that bold or remarkable. With this in mind, to what extent do you believe the letter-writers’ concerns are more the result of the cultural shift from rural to sub/urban settings than they are to a legitimate spiritual awakening to sexual purity? How would you express this to a sub/urban friend who replies that this merely proves their point: the DJ cover is inappropriate for children raised in today’s citified setting?

7. If you were not offended by the DJ cover or feel it was inappropriate, what would the cover need to include before you would begin to feel uncomfortable, or that the editor was not adequately exhibiting a Christian sensitivity in their cover art?

8. Is it possible for Christians who hold radically different views on the DJ cover to live happily together in the same Christian community? What would be required for this to occur? Could the fellowship in this community ever be anything more than superficial? How?

9. Some Christians would respond to the letter writers by saying that their concerns are so removed from both real life and a biblical view of sexuality as to represent a grievous barrier to the gospel. That it is attitudes like this that convince many young adults that evangelical Christianity is so inauthentic as to not merit serious consideration. That the problem is not in the cover but in the letter-writers’ consciences, which are immature, culturally bound, and biblically uninformed. Do you agree? Why or why not? If you agree, how might this be said to the letter writers without breaking fellowship with them?

10. How does this whole discussion make you feel about your faith? Why? Do you need to do anything about it?