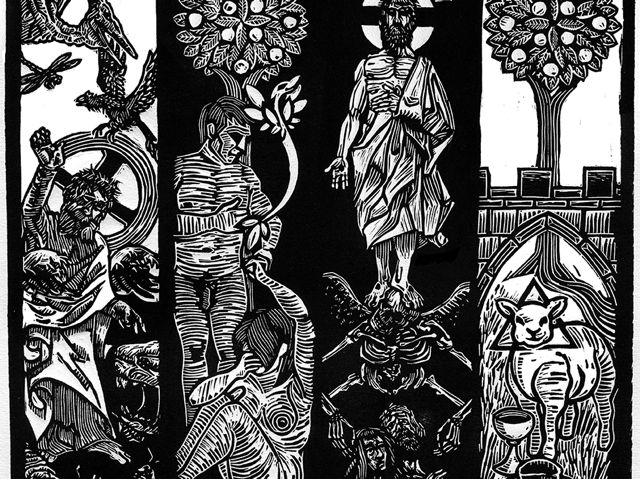 To the editor:
First, I’d like to thank you for devoting so much ink and paper in your last issue to Square Halo Books [Critique 2013:5]. We love all the books we have published since we started, but often lament the fact that so few know that we exist. Your magazine certainly helped to address our anonymity.
In the interview with me in that issue, Denis asked me to “gauge the embrace of the arts by the evangelical Christian community.” Thankfully, I work within the safety of obscurity, and did not have a great deal of anecdotal data to really do the question justice. But coincidentally, just after the interview, I had an experience that may shed some more light on the question that was posed to me.
One of the blockprints featured in the interview in Critique 2013:5 is called CFRC (Creation, Fall, Redemption, Consummation). At the urging of a friend, I submitted that piece into a juried show. I later heard back from the organization that was sponsoring the show that they would not be including my work in their show. When I read the reason for their turning my piece down, I laughed out loud. My friend, artist Edward Knippers has often been censured for making art that was “too nude for the Church and too Christian for the world” as he will often say. But this was the first time for me. The folks involved with the show were very gracious when they broke the bad news to me. They wrote, “The linocut was superbly executed and fit beautifully with our chosen theme… However… we need some fig leaves. The no nudity stipulation in the entry requirements is unavoidable. If we could break the rule on any, it would have been yours, it was truly a joy to look at your work. We sincerely hope you will continue to submit in the future.”
I had not read their rules (since my friend had urged me to submit work to the show) and did not know about the prohibition of nudity.
I am not upset at all by their rejection. It was their party, and I have no complaints about them not bending the rules for me. I pass this story along to you now to help address the question of where the arts are in our corner of Christendom. I hope it helps to provide an answer.
Under the Mercy,
Ned Bustard
Square Halo Books
World’s End Images
Lancaster, PA

Denis Haack responds:
Ned, I was delighted to put together the Square Halo issue of Critique, and hope it does help call attention to the superb books you are publishing. And I was pleased you were willing to be interviewed so that our readers could have a bit of insight into the calling and vocation of a Christian in the arts.
The story you relate in this email is fascinating, and raises an issue—nudity in art—worth thoughtful discussion and reflection by Christians who desire to be discerning in their response to culture and life and the church. As with most things like this we need to carefully bridge two divides. One is between the church and the watching world, and the other is within the church itself. In both cases care needs to be taken to listen with care, to reason appropriately, and to seek to persuade with civility. It’s easy to react to such things, but that isn’t sufficient. Your response to their rejection is admirable. We are called to live faithfully, intentionally under Christ’s Lordship and that applies here as much as it applies to anything else.
Thanks for writing, my friend.

1. List all the reasons a church or Christian organization might have for refusing to include nudity in an art show they are sponsoring. Prioritize the list of reasons you have developed from most to least important.

2. What passages of Scripture might the leaders of this church or Christian organization appeal to in support of their standard?

3. List all the reasons a church or Christian organization might have for including nudity in an art show they are sponsoring. Prioritize the list of reasons you have developed from most to least important.

4. What passages of Scripture might the leaders of this church or Christian organization appeal to in support of their standard?

6. Would you be willing to hang a print of CFRC in your living room? Why or why not? (Copies are available: http://www.etsy.com/shop/WorldsEndImages)

7. It is often assumed that when standards differ within a congregation or organization on such an issue the most conservative position needs to be honored in order to be certain no one is offended. Is this assumption a good one? Why or why not?

8. What cultural or familial influences might have caused your conscience to be shaped in unhealthy directions involving this issue? How can we distinguish healthy from unhealthy in this regard?

9. In his book Echoes of Eden: Reflections on Christianity, Literature, and the Arts (Crossway; 2013; page 60) Jerram Barrs states that, “nudity and explicit sex” in art should not be taken by the Christian to be automatically illegitimate. “The presence of these in a work of literature, drama, film, painting, or sculpture,” he argues, “is not by itself an indication of problems.” One reason he gives is that both are included in the Song of Songs in the Bible. Instead we have to be willing to ask a deeper question: “What is the moral impact of reading or viewing or listening to this piece of work?” Discuss.

10. How would the Christian worldview distinguish art shown within the church or a Christian organization compared to the art that might be shown in the surrounding world?

11. If the elders of your church, or the leaders of a Christian organization that you are associated with wanted to hang Ned’s piece in the lobby or an art show they were sponsoring, what would you advise them? Why?

12. Is this the sort of topic that Christians easily discuss with civility? Why or why not? What does this suggest about the state of Christian faith in the church? Does the division of opinion in the church tend to fall along generational, or educational, or economic class lines, or between those who demonstrate spiritual maturity and those less mature in the faith?

13. In Arts Ministry: Nurturing the Creative Life of God’s People (Eerdmans; 2013), Michael J. Bauer identifies five options in which congregations can find themselves regarding the arts (p. 261). The five include:
“Anaestheticism: restricting the use of beauty in the church."
“Aestheticism: employing only the most well-constructed art in the church.
“Cultural Relativism: choosing whatever art the people want."
“Critical Pluralism: providing a mixture of artistic styles."
“Developmentalism: assisting the congregation in the process of growth.”
Which describes you as a member of a congregation? Which describes your congregation? What plans might you need to make?