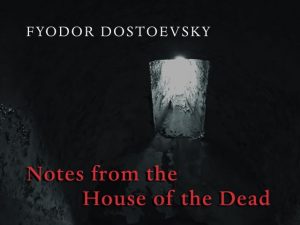 A place of cold suffering
On July 7, 1945, when Stalin shipped Alexander Solzhenitsyn off to a remote and brutal prison camp in Siberia as a political prisoner he was following a pattern that had been established many years before when Tsars ruled Russia. Siberia has long been a convenient dumping place for those deemed inconvenient to whoever held the reigns of power. Isolated by fierce geography and harsh weather, Siberia was out of sight and easily forgotten in the halls of Moscow. The people sent there knew there was a good chance they would not survive their imprisonment or exile in that forbidding land.

Almost a century before Solzhenitsyn’s sentence sent him to Siberia another Russian writer suffered a similar fate except he was first treated to a cruel trick. In January 1850, Tsar Nicholas I ordered a mock execution for a group of political prisoners. They were taken to the execution grounds, tied to the wooden stakes, heads covered with a shroud, the drum rolled, and at the moment the shots should have been fired an imperial edict was read that changed their sentence from death to imprisonment in Siberia. In that group was a man and writer named Fyodor Dostoevsky. For four years Dostoevsky languished in a military labor camp. Listed as “dangerous,” Dostoevsky spent his entire four year imprisonment in iron shackles and was allowed only one book, a New Testament. After he was released he recorded his experience in a powerful book, Notes from the House of the Dead. It is fiction but rooted in autobiography, not a smoothly told memoir but an effectively fragmented but compelling series of notes about life lived in a setting designed to remove dignity and extinguish hope.

I spent a long time trying to decide what brief fragment I could reprint here for you, to give you a sense of Dostoevsky’s prose and this new translation by Boris Jakim. There were numerous candidates but I kept returning to this one, so here it is:

In Tobolsk I saw men who were chained to the wall. The man is kept on a chain about seven feet long; his cot is right next to him. He’s kept chained like this for some exceptionally atrocious crime committed after his arrival in Siberia. They’re kept like this for five years, sometimes for ten. Most of these men were bandits. I saw only one man among them who seemed to be a former nobleman; he had been in the government service somewhere. He spoke very subserviently, with a lisp, and he had a mawkishly sweet little smile. He showed us his chain and the most comfortable way to lie down on the cot. He was a queer sort of bird! All these men were generally well-behaved and seemed content, and yet each one of them was extremely anxious to serve out his term as quickly as possible. Why, one wonders? Here’s why: so that he could get out of his dank, stifling room with its low-vaulted brick ceiling and take a stroll in the prison yard, and… that’s all. He’ll never be let out of the prison. He knows that men released from the chain will remain in prison forever, until they die, and they’ll all be kept in shackles. He knows that, and yet he desperately longs for a quick end to his period of enchainment. After all, if not for this longing, could he remain for five or six years on the chain without dying or losing his mind? Where is the man who would be able to endure it? [p. 100]

After his release (1854), Fyodor Dostoevsky went on the write some of the classics of Russian literature, such as Crime and Punishment (1866) and The Brothers Karamazov (1880) before his death in 1881. And as you probably remember from reading such works back in school, Dostoevsky’s novels are not only packed with intricately drawn characters and tightly imagined dialogue but touch on the deepest philosophical questions of the human heart. Critics claim that a careful reading of his work shows how many of the themes and characters developed in his later novels have their genesis in Dostoevsky’s prison experience and are glimpsed in Notes from the House of the Dead. As well as an ability to capture in words all the details of life in order to paint such an exquisite picture within his story that the reader seems to experience what Dostoevsky describes.

At night it would be unbearably hot and stuffy. Although the cool night air would drift in from an open window, the convicts would toss and turn on their planks all night as if in delirium. Fleas swarmed in myriads. We had them in winter too, and in fairly large numbers, but beginning with the spring they multiplied in such quantities that even though I had heard about this before, I couldn’t believe it until I had experienced it myself. And the closer we’d get to summer, the more ferocious they’d become. It’s true that you can get used to fleas, and I myself was able to do so, but it’s not easy. They’ll sometimes torment you to the point where finally you’ll be lying as though in a burning fever, feeling that you’re not sleeping but only delirious. When finally, just before morning, there’s a lull, and the fleas seem to subside, and just when, in the cool of the morning, you really do seem to fall into a sweet sleep — suddenly the pitiless rattle of the drum at the prison gate strikes up reveille. Wrapped in your sheepskin coat, you listen, cursing, to the loud, distinct sounds as if you’re counting them, while through your sleep there creeps into your head the intolerable thought that it will all be the same tomorrow and the day after tomorrow and for years and years until the day of freedom comes. But you ask yourself, When will this freedom come, and where is it? But meanwhile you have to wake up; the daily round begins with the convicts scurrying around and pushing and shoving one another… they’re getting dressed and hurrying out to work. [p. 241-241]

Far, far back in human history, the story is told of the first time a man killed his brother. It was, as murder always is, a foul act, and one that marked the killer and the victim’s family for life. And as is always the case, the guilty man found himself confronted by God, for this is his world and we are his creatures, made of dust to flourish in his presence. Cain first claimed to have no knowledge of Abel’s whereabouts, to which God said a startling thing. “What have you done?” the Lord asked him. “Listen; your brother’s blood is crying out to me from the ground!” (Genesis 4:10)

Centuries later the Hebrew prophet Habakkuk warned that those who gained wealth and power in unjust ways would find that even their houses would witness against them. “The very stones will cry out from the wall,” Habakkuk said, “and the plaster will respond from the woodwork” (2:11). If we had ears to hear, what would these cries sound like?

I am relieved that for now only God can hear them, as we would be overwhelmed to death by the cries emanating from the ground that has borne so much human injustice over the millennia. We can only bear little echoes, like those recorded by artists so that we can hear a little more clearly and be made to yearn more deeply for the justice only the rightful King can supply.