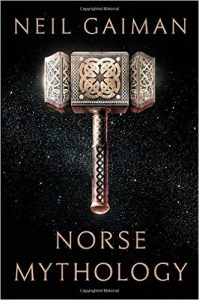 Ancient stories from icy terrain
When I heard that Neil Gaiman was publishing Norse Mythology (2017), a retelling of the ancient Nordic myths I knew I needed to read it. These are stories that animated the imagination of C. S. Lewis, a thinker and storyteller I respect. And I believe in myths, believe in them in the sense that I am convinced that the old stories told and retold over generations contain some kernel of insight into the yearnings of the human heart. I am a Christian, and I believe that the story of Jesus is the great myth that is true.

The Nordic myths shaped our world and the traces of that impact, Gaiman notes, are as close as our reckoning of the passage of time each week.

The Norse myths are the myths of a chilly place, with long, long winter nights and endless summer days; myths of a people who did not entirely trust or even like their gods, although they respected and feared them. As best we can tell, the gods of Asgard came from Germany, spread into Scandinavia, and then out into the parts of the world dominated by the Vikings—into Orkney and Scotland, Ireland and the north of England—where the invaders left places named for Thor or Odin. In English, the gods have left their names in our days of the week. You can find Tyr the one-handed (Odin’s son), Odin, Thor, and Frigg, the queen of the gods, in, respectively, Tuesday, Wednesday, Thursday, and Friday. [p. 12-13]

I have not read classic versions of these myths and so cannot comment on Gaiman’s retelling of them except to say that he makes them accessible to modern readers. And he includes a helpful, extensive glossary that identifies names, places and events to help us keep track of the details.

Of greater interest to me is why such a book would be of interest to readers outside the halls of academia. And why one of the most successful fantasy storytellers would write it. Our scientific age has produced remarkable advances in medicine, technology and knowledge but at a cost that is rarely considered. Reality has been reduced to naked cause and effect, a world without windows in which nothing exists beyond the here and now, beyond that which can be proven by science. It is a bracing world, a world of progress, but it is also boring as hell—and I use this description advisedly. Hell is where creatures made in God’s image cut themselves off from God, the ultimate source of life, light and flourishing, and if that isn’t a recipe for boredom I can’t imagine what would be. People simply cannot live contentedly in a boring cosmos, and all they experience in life and relationships points to something more. As C. S. Lewis suggested in his science fiction novel, That Hideous Strength, a post-Christian culture drifts towards paganism when science, progress and things displace the centrality of God.

I need to read Norse Mythology a second time. It imagines a cosmos that is foreign to me, foreign enough that in the first reading I was only a distanced observer. I need to read the stories again to try to indwell them, to imagine living in a world in which these myths define the nature of life and reality. It’s all here—the stories begin with the world’s beginning and ends with its destruction in ice and fire.

My culture is shifting in the direction of pagan heroes and ideas. I do not mean that we should expect temples to be erected in honor of Odin, but that the myths of the pagan gods help to inform the social imaginary of many of our neighbors. The old stories evoke a world in which there is more to existence than merely the here and now, in all its boring, meaningless sequence of cause and effect. I want to understand this shift well enough to be able retell the story of Christ in a way that my neighbors will be able to understand and perhaps find compelling.