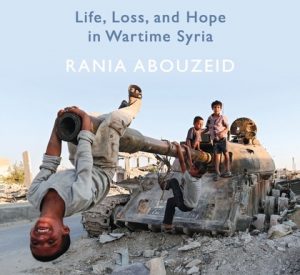 Humanizing a brutal conflict
The basic chronology is well known. In December 2010, a desperate street vendor, Mohamed Bouazizi set himself on fire in Tunisia. A long history of rampant corruption, food shortages, systematic oppression, a lack of freedoms, and chronic unemployment prompted thousands of Tunisians to pour into streets and public squares in protest. A month later the government of President Zine El Abidine Ben Ali collapsed. The fear of speaking out had somehow been broken. Protests spread quickly to other Arab nations, to Egypt, Oman, Libya, Jordan, Yemen, and across the Middle East. In January 2011 a timid protest occurred after prayers in Syria. President Bashir al-Assad responded by unleashing his security and armed forces, and within a few months Syria descended into a savage civil war.

Then the story gets complicated, with numerous factions and militias forming and reforming, splitting and joining, all fighting the regime and often, each other. Keeping track of the players and their conflicting visions for the future of Syria makes the news of the war seem impenetrable.

Journalist Rania Abouzeid has spent the last five years traveling into Syria, sometimes illegally, often in danger. Now in No Turning Back: Life, Loss, and Hope in Wartime Syria she helps unravel the convoluted story of the civil war. She provides a history of the conflict and brings us into the lives of four Syrians who represent some of the different factions struggling against Assad’s ruthless dictatorship.

We meet Suleiman, a wealthy businessman documenting protests on the Internet until he is arrested and tortured in the maze of prisons operated by Syrian security forces. When we meet Mohammad he is in prison, jailed for his Islamist views, and when released joins Jabhat al-Nusra, the Syrian branch of Al-Qaeda. Abu Azzam is a literature student drawn into the conflict against his wishes and who goes on to help found the Free Syrian Army. And Ruha, only 12, is sucked into the horror when security agents invade her family home searching for her father. He escaped, but they then lived under the regime’s intentional bombardment of civilian neighborhoods. “Even the cemeteries weren’t safe from the planes, the gravedigger said. Another one in town had been shelled. ‘The living were martyred and the dead were martyred twice,’ he said. ‘Life is the cheapest thing in Syria now.’” [p. 329] Abouzeid follows each individual, their family, friends and associates, over the passage of years (2011-2016), allowing them to tell their story in their own words.

Abouzeid is a superb storyteller, able to unspool the myriad details of a complex and ever shifting conflict into a narrative that allows us to make better sense of the Syrian war. Even more impressively, she allows us to see it through the eyes of those actually swept up in it. No Turning Back brings the civil war into human focus, so that today’s news from Syria can be heard within a meaningful historical, cultural and religious context.

Rather than go into exile, Maysaara, Ruha’s father has remained in Syria, trying to dodge the conflict to rebuild and provide opportunities for his destitute neighbors. “If I lose Syria,” he told Abouzeid, “I lose everything.”

No Turning Back is a story of intense, relentless suffering. Reading No Turning Back reminded me of what I experienced when I first read Alexander Solzhenitsyn’s One Day in the Life of Denisovich in the 1960s. Obviously they are different—one is an artful novel, the other careful war reporting. Still, in each case I read a book and was changed. My thinking about the Soviet Union and Syria, respectively, were clarified, true, but far more importantly, I now heard the news with my heart as well as my mind. Reports of artillery and missile strikes, barrel bombs and chemical weapons, torture and beheadings, arms and humanitarian aid, ceasefires and treaties are now stories of real people undergoing suffering that is beyond my ability to imagine. But imagining it that way, truthfully, is essential if I am to make sense of the news and to act appropriately as a Christian.

For that I am very grateful to Rania Abouzeid for writing No Turning Back. I recommend it to you.