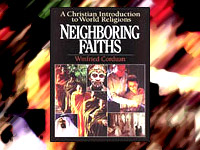 Consider this: there are, it is estimated, 300,000 followers of Baha’i, which happens to be the world’s youngest world religion, living in the United States. There are 780,000 Buddhists; 910,000 Hindus; and 5,100,000 Muslims in the U.S. In the town in which I am writing, Rochester, MN—by most measures a rather conservative, relatively small Midwest community—a “Buddhist Society” is listed under “Churches” in the Yellow Pages, and Islamic believers say their prayers in a downtown storefront mosque a block from the Mayo Clinic. Los Angeles is now the second largest Iranian city in the world. There are more Buddhists in the U.S. than there are Episcopalians. Muslims, it is estimated, will outnumber Presbyterians in America by the year 2000. A full third of the world’s Jews live in America. And 40,000 of Red China’s future government and business leaders study at U.S. universities and colleges.

All this, of course, is simply another way of asserting two significant facts: first, that we live in a pluralistic culture, and second, the likelihood that we will meet the follower of a nonchristian world religion increases every day. And that, in turn, means that the Christian who seeks to be faithful will want resources to help gain a proper understanding of the beliefs and practices of those who follow these religions. Neighboring Faiths, by a Christian professor of philosophy and religion at Taylor University, is just such a resource.

After opening with a chapter on the nature and practice of religion, Dr. Corduan addresses the various world religions in successive chapters:

Each chapter covers the history, beliefs, and practices of the world religion under discussion. Though necessarily introductory in nature—each religion obviously warrants volumes, not a chapter—the author is careful to nuance his discussion and clearly desires to refrain from unfair generalizations. Following each discussion Corduan includes a helpful section with creative and sensitive ideas for Christian witness with real understanding. Given the unfortunate tendency of evangelical believers to “witness” using regurgitated presentations regardless of their listener’s concerns, values, and beliefs, this section alone is worth the price of the book. And, being a college professor, he also includes a list of what the reader should know upon mastering the material in each chapter, a selection of term paper ideas, and a bibliography for further reading and study.

“Christians who seek to be relevant to the world in which they live must understand the beliefs of the people with whom they share the globe,” Dr. Corduan writes. His own pilgrimage in understanding began rather inauspiciously. “I had already begun graduate study at Rice University,” he remembers, “when my department chair, Niels C. Nielsen, thrust a copy of John B. Noss’s Man’s Religions into my hand and said, ‘Corduan, get educated!’ I must have said something embarrassingly ignorant about an Asian religion, although I do not remember what it was. I remain grateful to Professor Nielson for this forthright exhortation.”

We too can be grateful for Neilson’s exhortation because Neighboring Faiths is the result. Though it is not all we will need for faithfulness in religiously plural world, it is a very good introduction. It is also well written, full of pictures, charts, and maps. Get a copy for yourself, and one for your church library.

Neighboring Faiths: A Christian Introduction to World Religions by Winfried Corduan (Downers Grove, IL: InterVarsity Press; 1998) 336 pp. + notes + index. Statistics on religious pluralism are from Neighboring Faiths and “What in the World!” in Charisma (October 1997).