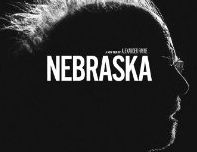 When the Journey Takes Us Nowhere
Woody Grant, played with great sensitivity by the veteran actor Bruce Dern, sets out from his home in Montana to walk to Nebraska to claim his prize. The sheriff finds him walking down the highway and brings him home. “So,” his son, David, played with quiet dignity by Will Forte of Saturday Night Live fame, says, “you told the Sheriff you were walking to Nebraska?” “That’s right.” Woody replies, “To get my million dollars.” Woody received a letter for a Mega Sweepstakes that he interprets as promising him he’s won first prize. All he has to do is show up and claim it, and he intends to do just that. It’s a scam, of course, and David realizes that, but Woody doesn’t. The receptionist at the Sweepstakes office is surprised when they appear. “Does he have Alzheimer’s?” she asks David. “No, he just believes what people tell him,” David says.“That’s too bad,” she muses. She gives him a cap as a consolation prize.

Along the way, Woody and David spend time together, they interact with members of the extended family and a series of friends and acquaintances that suddenly take notice of Woody now that he’s rich. Woody’s wife, Kate, played with great comic effectiveness by June Squibb, offsets what could otherwise be the depressing story of an aging man. Her lines are consistently funny, though what she says seems more representative of Hollywood than the vast majority of older Mid-Westerners I have met.

Filmed in black and white, Nebraska is a thoughtful and charming film, depicting real people whose lives have been touched by the same brokenness we all experience. Woody has no desire to be rich—he merely would like to buy a new pickup truck, something he’s never owned, and be able to replace the air compressor his former business partner, Ed Pegram (played by Stacy Keach) absconded with years earlier. Woody’s son, David, wants to love his father, yet is embarrassed by Woody’s conviction that he has won a million dollars. The sudden greed that causes people to suddenly gather around like vultures drawn to a carcass is shown with insistent plausibility.

Roger Ebert wondered, in his review of the movie, whether the director wasn’t gently mocking his characters, but I think that is mistaken. A. O. Scott, in his review in the New York Times, has it partly right: “This is a comedy, with plenty of acutely funny lines, a handful of sharp sight gags and a few minutes of pure, perfect madcap. But a grim, unmistakable shadow falls across its wintry landscape. The world it depicts, a small-town America that is fading, aging and on the verge of giving up, is blighted by envy, suspicion and a general failure of good will. Hard times are part of the picture, and so are hard people.”

Alexander Payne, the director of Nebraska, who also wrote and directed About Schmidt (2002) starring Jack Nicholson, was born and raised in Omaha, NE. His roots in the midwest certainly shaped the film, with its wonderful shots of plains and fields and small towns and the people we find there. I never felt, though, that Payne is mocking his characters. Nor did I sense that he intended to make a sociological statement about small town America and its decay. Rather, as in About Schmidt, Payne’s theme is the journey of life—he is using humor to tell the story of broken people on a journey in a broken world.

Nebraska, it seems to me, is a stylized comedy about the dreams and disappointments of a man whose journey turns out to be a trip to nowhere. Can we love people like Woody if we can see their quest is illusionary? To some extent, hasn’t our own pilgrimages been flawed with the brokenness that comes from illusionary hopes? Throughout the film, Payne shows us moments when a different choice in the past could have resulted in a different present—don’t we feel such pangs of regret ourselves? Haven’t we, to our shame, found ourselves drawn to relationships from which we can somehow profit rather than give in sacrificial compassion? And don’t most of us wonder if perhaps, when all is said and done, our journey is really going nowhere?

1. What was your first impression of the film? Why do you think you responded as you did? 2. Consider the film, as objectively as possible, as a work of art. Reflect on the various aspects of cinematic art (acting, script, cinematography, direction, editing, lighting, musical score, etc.). What was used to good effect? Was anything distracting to you? 3. The director, Alexander Payne, chose to film Nebraska in black and white. Some people claim to find b & w an aesthetic that detracts from their cinematic experience—did you find that to be the case here? 4. Imagine the writer and director sitting next to you. As objectively as possible, state in your own words the message(s) communicated by Nebraska. No opinions here—the goal would be to listen so carefully to the film that the writer and director would affirm your statement(s). 5. The main characters of the film each play a strategic role in the development of the story. Consider each in turn, identifying the strengths and weaknesses of their character. 6. Beyond comic relief, what place did the quest for an air compressor play in the film? 7. Bruce Dern (as Woody) and June Squibb (as Kate) were both nominated for Oscars for their roles in Nebraska. Do they deserve accolades for the performance? 8. Most of us think more highly of ourselves than imagining we would be the type to cozy up to someone with money in the hope of gaining some for ourselves. Has there been times, however, when our relationships are determined not primarily by how we might serve but be served? 9. Have you ever found yourself wondering whether your life has real significance? How would you describe that experience? What has helped? To what extent is this due merely to your natural optimism or pessimism? 10. Are there big, or at least significant choices that you made in the past that you now regret? How do you think your journey would be different if you had chosen differently? 11. To what extent do you find it difficult—perhaps even impossible—to act as a faithful and constant friend to someone pursuing an impossible dream? 12. When we see broken people in this broken world with more than the usual clarity, how do we continue to love, even at cost? What might that cost include? What do we expect from family and friends when they see us with clarity?