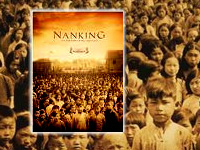 A Place of Safety: a review of the documentary Nanking
In 1937 while Hitler consolidated power in Germany, Stalin held show-trials in Moscow, and F.D.R. was sworn in for a second term as president of the United States, Japan was at war with China. In August of that year, the Japanese Imperial Army attacked the coastal city of Shanghai. Fighting was intense—the Kuomintang (Chinese Nationalist) army put up such strong resistance that bloody hand-to-hand combat was required to take the city. About 190 miles NW of Shanghai was Nanking, China’s capital, a prosperous center of trade with an estimated population of over 600,000. As the Japanese Army pushed towards Nanking, they launched massive, relentless aerial bombing runs that killed thousands of civilians and reduced much of the city to burning rubble. News quickly spread of atrocities being committed by the Japanese, the most infamous that of a contest among the soldiers of who could most quickly dispatch 100 Chinese with a sword.

On December 9, 1937, the Japanese Imperial Army reached Nanking, and three days later the commander of the Chinese army ordered his men to retreat. The result was chaos, with hundreds of soldiers stripping off their uniforms in an attempt to blend in among the thousands of civilians flooding into Nanking. The soldiers who did retreat burned and blew up everything they could find in a scorched earth attempt to leave nothing of value for the Japanese invaders.

A handful of Western citizens decided to remain in Nanking, declaring a Safety Zone where Chinese civilians could be sheltered from the worsening combat. The Zone leader was a German citizen John Rabe, in China as a businessman working for the Siemens Corporation. Joining him in the Zone was an American, Dr. Robert Wilson, a surgeon who soon was the only Western physician in the city trying to treat an ever-growing number of casualties. And there were also a handful of missionaries, individuals like John Magee, Minnie Vautrin, and Lewis Smythe that are unknown to us, but who should be held in honor for their courageous, unstinting, and selfless service in a mostly forgotten corner of world history.

On December 13, the Japanese Army entered Nanking, slaughtering hundreds of Chinese who were rushing to enter the boundaries of the Safety Zone. Although the Japanese never officially agreed to honor the Zone, their artillery did not shell it as they took the city. The rest of Nanking, however, became a scene of nonstop killing, rape, pillage, and destruction. Japanese soldiers entered the Zone over the next few weeks, demanding the Westerners turn over to them the former Chinese soldiers hiding among the civilians. Every Chinese man who looked like he could have been a soldier was summarily executed, along with numerous boys and elderly men. The Imperial Army also demanded young women be turned over to them—thousands of Chinese woman in Nanking were gang raped, mutilated, then bayoneted and left to die in the streets.

Unarmed, cut off from the West and their own governments, unable to communicate with the outside world, the members of the Nanking International Safety Zone Committee stood their ground. Whenever Japanese soldiers entered the Zone he was closely shadowed by one of the Westerners. Repeatedly they refused to obey Japanese Army requests, placing themselves between Japanese soldiers and Chinese civilians. In the end it is estimated that they saved the lives of 250,000 men, women and children.

The documentary, Nanking, is their story. It consists of actual film footage taken during the invasion and destruction of Nanking interspersed with actors reading from the diaries and letters of the members of Zone Committee.

It is a horrible story to relate; I know not where to begin nor to end. Never have I heard or read of such brutality. Rape: We estimate at least 1,000 cases a night and many by day. In case of resistance or anything that seems like disapproval there is a bayonet stab or a bullet. [James McCallum, letter]

There probably is no crime that has not been committed in this city today. Thirty girls were taken from the language school last night, and today I have heard scores of heartbreaking stories of girls who were taken from their homes last night—one of the girls was but 12 years old… Tonight a truck passed in which there were eight or ten girls, and as it passed they called out “Jiu ming! Jiu ming!”—save our lives. [Minnie Vautrin, diary]

Nanking is not an entertaining film, though well made and utterly enthralling. It reminds us that the brokenness that plagues God’s world is an evil that resides deep in the human heart. It reminds us that we prefer happy endings to the truth, but that sweeping historical injustices under the rug of forgetfulness dishonors the nameless victims who suffered. And it reminds us that true heroes do not set out to be heroic but simply chose, in the face of injustice to do what is right—and that such heroes need to be remembered and held in honor.

1. What emotions did you experience as your watched Nanking? Do you think the director unfairly manipulated viewer’s emotions? Why or why not? 2. In what ways were the techniques of documentary film-making (casting of actors as readers, direction, script, music, sets, choice and editing of historical film footage, etc.) used to get the film’s message(s) across, or to make the message plausible or compelling? In what ways were they ineffective or misused? 3. Were you surprised that John Rabe was sympathetic to the National Socialist Party in his native Germany? What does this suggest for people who might adhere to ideologies or beliefs that you might find incomprehensible or even reprehensible? 4. “According to Samuel Yamashita, a professor at Pomona College in the U.S.,” says Coco Masters, “details of the massacre and other atrocities were swept under the rug in postwar Japan, because the U.S. needed a strong Japanese nation on their side to counterbalance the growing threat of Communist China. ‘Execute a few heinous individuals and forget about everything else.’ That's how Joshua Fogel, a modern Asian studies historian at York University in the U.S., describes the American response to the massacre. ‘Just imagine if that had been the solution for postwar Germany rather than the Nuremberg Trials,’ Fogel says.” Do Christians in America have responsibility to urge the United States government make amends for this policy? Do we have responsibility to make certain nothing like this happens again? What practical steps should we consider taking as American citizens? 5. How is the heroism displayed in Nanking different—or similar—to that portrayed in super-hero stories?