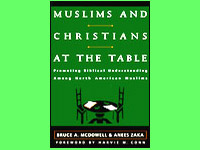 Picture this. Two friends, one a committed Christian and one a committed Muslim, sitting at a table sharing a meal. Open before them on the table are two books, the Bible and the Qur’an. Both are enjoying the conversation. The Christian is intentionally asking questions and listening with care. The conversation is animated, and ongoing, and has, in fact, been occurring regularly for several months. What we are picturing is an evangelistic Bible study, a holy spirited attempt to share the gospel of Christ with one of the millions of Islamic believers now living in the West.

Muslims and Christians at the Table was written to teach Christians how such evangelism can occur. The authors, Bruce McDowell and Anees Zaka are both qualified to teach us. Both have earned doctorates from Westminster Theological Seminary and have studied Islam over many years. Both have been involved in Tenth Presbyterian Church in Philadelphia under the ministry of the late Dr. James Boice. And most important, both not only have a passion for the gospel, but extensive experience leading evangelistic Bible studies with Muslims living in North America. “We came to believe that this book was needed,” they write, “after noticing a lack of practical guidance on how to witness to Muslims in the North American context. Most of the available literature discusses the theoretical and theological aspects of witnessing to Muslims, but provides little of the practical how-tos. The purpose of this book is threefold: (1) to set forth the historical, cultural, and theological background of Islam as a foundation for witnessing to Muslims, (2) to encourage witnessing to North American Muslims with the gospel, and (3) to teach how to witness to them more effectively by promoting biblical understanding.”

Muslims and Christians at the Table is divided into four parts. First, McDowell and Zaka share their vision for reaching the thousands of Muslims now living in North America. Chicago alone has 50 mosques and nearly half a million Muslims; New York City 700,000. Islam is the fastest growing religion in America (averaging 4% growth annually) with an estimated total of 5 million followers. This means there are more Muslims in America than Episcopalians and Presbyterians combined, and more living in the U.S. than in Libya. In part two of the book McDowell and Zaka provide a historical and cultural overview of Islam. Then, in a much longer section, they deal with the theological issues, such a comparison of the Bible and the Qur’an, the nature of God, and the problem of sin. In the final section they introduce us to a practical way in which Christians can reach Muslims with the gospel through evangelistic Bible studies in the context of committed and lasting friendships. At the end of each chapter are discussion questions, which makes the book even more helpful both for personal reflection and for use in small groups.

This is a “how-to” book, but in the sense of providing practical training, not in the sense of providing simplified steps of action that are then repeated endlessly. Even if we do not yet have Islamic friends and neighbors—and if they are our neighbors, what reason could we possibly give for not having them as friends?—the approach to evangelism taught in this book is creative and alive. McDowell and Zaka are sensitive to the fact that the gospel is a living message, not a sound bite to be regurgitated on command, that our non-Christian friends are made in the image of God and must be treated as such, and that the evangelistic encounter is not a debate to be won, but a relationship to be nurtured, even at cost.

“The amazing growth of Islam in North America during the last few decades has gone largely unnoticed by the evangelical church,” McDowell and Zaka say. “Many people still think that missions is only done overseas, and that unreached people do not live here in North America. After all, we have the gospel on radio and television daily, churches are found every few blocks, and Bibles are easily available. However, what is not realized is that those who are outside of the Christian subculture are rarely exposed to the gospel. Those who have come from an Islamic background have never heard the gospel in terms that they can understand. Even native-born Americans who are converting to Islam out of Christian backgrounds have generally not heard the gospel in a culturally relevant way that addresses issues that concern them.”

We recommend Muslims and Christians at the Table to you. Get a copy and work through it with a small group of Christian friends. Begin praying for your Islamic neighbors by name, that God would bring them to Christ, and that he might use you as part of that process. Put a copy of the book in your church library. And give thanks that God has raised up gifted teachers like Anees Zaka and Bruce McDowell from whom we can learn.

Muslims and Christians at the Table: Promoting Biblical Understanding Among North American Muslims by Bruce A. McDowell and Anees Zaka (Phillipsburg, PA: Presbyterian and Reformed Publishing; 1999) 261 pp. + 2 appendices (“The Story of a Muslim Immigrant” and “A Bible Study Case Study”) + notes + glossary of Islamic terms + resources for further study.