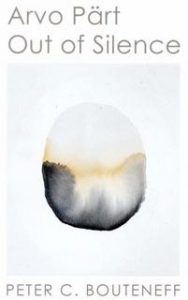 Most people have heard the music of Arvo Pärt—even if they are unaware of it. It has been featured in the soundtracks of numerous films including Avengers: Age of Ultron (2015), There Will be Blood (2007), The Barbarian Invasions (2003), Mostly Martha (2001), Wit (2001), and The Thin Red Line (1998). In each instance Pärt’s music lends quiet reflection, subtle mystery and a hint of transcendence to whatever it illuminates.

Pärt was born in Estonia in 1935, and after suffering harassment from Soviet authorities was allowed to immigrate to the West in 1980. As a child the family piano had been damaged in the middle of the keyboard and so the young Arvo played with the top and bottom registers. For the last several decades he has composed in a classical minimalist tradition with great beauty and creativity.

At a time of supposedly ascendant secularism, Pärt along with Henryk Górecki and John Tavener have followed a very different path. They have composed music that is unashamedly rooted in a spiritual view of life and reality, and that celebrates the rich tradition that religion brings to the possibilities of music that touches the soul as well as the mind.

Arvo Pärt is Eastern Orthodox, and his music is best understood when heard in light of that theological tradition. Peter Bouteneff, a musician and theologian who teaches at St Vladimir’s Orthodox Seminary (New York), helps us hear Pärt’s music in light of these deep roots in Arvo Pärt: Out of Silence.

“To really understand his music,” Nora Pärt has been quoted saying about her husband’s work, “you must first understand how this religious tradition [Orthodox Christianity] flows through him.” To which Arvo adds, “If anybody wishes to understand me, they must listen to my music; if anybody wishes to know my ‘philosophy’, then they can read any of the Church Fathers.” [p. 16]

Eastern Orthodoxy is a tradition that shares my convictions summarized in the Apostles Creed, but which gives a different shape to Christian doctrine and practice than I am used to as a Protestant. Bouteneff is a helpful guide, writing not for professional musicians or theologians but for interested lay listeners of Pärt’s music. Since both minimalism and Orthodoxy may be foreign to us, his exposition opens both understanding and the ability to hear.

Pärt’s minimalism embraces both sound and silence, and in this contemplative interaction points beyond itself to something hidden and yet revealed.

The God of Judeo-Christian tradition is inconceivable and indescribable, and must be approached in silence and darkness—the early Christian writers called this apophasis. Yet it has been given to humans to say something, to him and about him, which they called kataphasis. The great mystical theologian Dionysius the Areopagite (probably from the sixth century) has explored this paradox thoroughly, speaking of God as “nameless, and yet having the names of everything that exists.” Dionysius asserts that God, who is beyond being, is found within the “dazzling darkness of a hidden silence.” Yet he notes the paradox that, given the way we are created, we must ultimately say something about God—so long as it is in the full cognizance of God’s radical otherness and ineffability. The affirmations (words) about God must bear the character of the negations (silences). “Every affirmation… has the force of a negation pointing toward transcendence.” The purpose of silence is to generate a right word, a right sound. There is not the one without the other: no silence without sound, and no sound that does not begin or end with, or somehow embody, silence. [129-130]

Arvo Pärt has enriched our world and spoken the gospel to audiences that would never darken the door of a church. A musician and Christian, his faith animates his music so that the one is impossible without the other. Thanks to Peter Bouteneff we can now hear Pärt’s music with an understanding that helps us relish the awful mystery that is God.