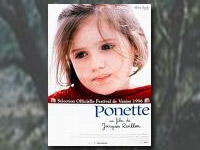 Death is a recurring theme in art and culture, which is hardly surprising since it is one of the great certainties of life in this sad and fallen world. Every world and life view must address the topic, since no belief is compelling if it cannot give some answer to the question of what is on the other side of the grave, and what our grief means in the final scheme of things. Though death is often depicted gratuitously in movies, occasionally films raise the issue seriously by inviting reflection on what death means, and thus on the meaning of life which must be lived out moment by moment in the shadow of death. Such films can be doubly helpful to believers. They first grant a window of insight into how our culture tends to understand death, and they also provide a point of contact to begin discussion about a topic most people would naturally tend to avoid.

None of the three films I mention here will likely be numbered among the great films of cinematic history, though this one—Ponette—is quietly remarkable in its own way. The other two, Meet Joe Black and What Dreams May Come, are by and large forgettable and unsatisfying films, except for the fact that they express a largely unspoken confidence that many post-moderns share, namely, that true love is the final reality and can conquer anything, even—apparently, somehow—death itself.

As Ponette opens, we meet a four-year-old girl by that name who has just survived an automobile accident in which her mother was fatally injured. “Mommy is dead,” her father tells her. “Do you know what that means?” “Yes,” Ponette says with the quiet confidence only a child can muster. “She is flying with her magic mirror.” Then, with amazing realism the film ushers us into the world of a charmingly poignant little girl as she tries desperately to come to grips with the death of her mommy.

What makes Ponette remarkable is two things. First, Victoire Thivisol’s performance as Ponette is so natural and compelling that it is difficult to believe you are only watching a movie. Apparently, Jacques Doillon, who both wrote and directed Ponette, spent months with the children, rewriting the script and re-shooting scenes based on their reactions to the story as it unfolded. The second remarkable aspect to Ponette is Doillon’s ability to take us into Ponette’s world without condescension. His script and direction, along with the camera work of Caroline Champetier, allow us to see life and reality from a four-year-old’s perspective.

On one level, Ponette is the story of a four-year-old grieving the loss of her mother, and trying to understand what it means. She hears the story of Christ’s resurrection from her aunt, but is also told a myriad other stories and theories by her cousins and playmates. The conversations are plausible in their childish content, and made believable by being delivered so naturally that the children in the film seem unaware the camera is rolling. Yet, on another level, Ponette is a metaphor for our post-modern world, where each person must live and face death without a metanarrative to make sense of it all or to distinguish truth from the myriad myths that are commended by those around us.

Watching Ponette grieve is deeply moving, especially among her friends who, like all children in a fallen world, can be both wonderfully kind and deeply cruel. More moving still, however, is watching Ponette pray, pleading with God to let her mother visit her. “God Almighty, you know my mommy is dead because she is with you,” Ponette says at one point, her eyes tightly shut and her hands carefully folded. “I want to talk to my mommy.” And then she waits, looking around expectantly, patiently waiting for her mommy to come in answer to her prayer. Watching the scene reminded me of what C. S. Lewis wrote after the death of his wife:

“No one ever told me that grief felt so like fear. I am not afraid, but the sensation is like being afraid. The same fluttering in the stomach, the same restlessness… Meanwhile, where is God? This is one of the most disquieting symptoms. When you are happy, so happy that you have no sense of needing Him, so happy that you are tempted to feel His claims upon you as an interruption, if you remember yourself and turn to Him with gratitude and praise, you will be—or so it feels—welcomed with open arms. But go to Him when your need is desperate, when all other help is vain, and what do you find? A door slammed in your face, and a sound of bolting and double bolting on the inside. After that, silence.”

If that is the experience of a deeply committed and mature Christian in the midst of grief, imagine the pain of a four-year-old who prays, waits, and then in the face of unanswered prayer, waits some more.

Ponette will certainly not be of interest to everyone: not only is it in French with English subtitles, the plot involves not action but a quiet unfolding of a little girl’s grief. On the other hand, it is a rare film which prompts discussion on some of the most vital questions of life, and which does so in such a charming way as to be disarming. Not only could Ponette be good to prompt serious reflection for selected groups of both believers and non-Christians, parents could use the film as an aid to teach their children to think Christianly about death, grief, and the meaning of life.

As I already noted above, two films released in 1998 also address the topic of death are worth a brief mention.

Meet Joe Black
William Parrish, a remarkably wealthy and privileged man, is surprised by the appearance of Death, who makes him an offer. Death will let Parrish live a bit longer if Parrish will act as a guide so Death, having taken the body of an attractive young man, can experience human life as Joe Black. Then things get complicated when Black falls for Parrish’s lovely daughter, and she for him, which Parrish doesn’t like, until he sees that his daughter seems remarkably and wonderfully alive being in love with Death, and then the film winds oh-so-slowly down to a final scene even more implausible and sentimental than that… and in case anyone misses the point, the tag line in the advertising for the film is: “No one can die—while he loves!”

It is easy for Christians to react by simply dismissing such notions as this, but we would do better to reflect carefully on how we should respond. Though Meet Joe Black was not popular at the box office, the message of the film reflects the yearnings of many. Our culture, which has turned from the truth of God’s word, is holding out some hope that love might hold an answer to the dilemma of death—and that is not entirely off base. The biblical good news tells the story of a God who is love, and of a Redeemer who has called his followers to love one another as a living proof of the redemption bought for us by the One who loved us so much, he died.
A question to consider: Is it possible that our faith looks as implausible to our friends and neighbors as Meet Joe Black seems to us because we have failed to love the way our Lord has commanded?

What Dreams May Come
On the surface, What Dreams May Come is a simple story of a couple who are deeply in love. After Chris dies in a car accident and goes to heaven, his wife commits suicide and goes to hell. Chris, still deeply in love with Annie, overcomes all obstacles to find and rescue her. On a deeper level, it is a post-modern retelling of Dante’s vision of the afterlife—which provides a helpful insight into the culture in which we live.

Not a very good film, it still holds some interest for the Christian. First, when Chris arrives in heaven he discovers that heaven is whatever he thinks it is. The film’s message of the power of love in a universe in which reality is a construction or projection of our consciousness must be taken seriously as a reflection of how many post-modern people view the nature of reality.

Second, the film’s depiction of life after death is fascinating. Heaven is rather impersonal and kitschy (it looks like a painting by Thomas Kincaid), while hell is depicted with some creativity. Exploring to what extent the film reflects a biblical understanding of heaven and hell can be an interesting exercise. Third, consider how What Dreams May Come has revised Dante’s story. (For example, given that we live in a therapeutic culture, it is significant that Chris’ guide—The Tracker—is a psychiatrist.) And finally, Max von Sydow, who plays the Tracker, also appeared in Ingmar Bergman’s film on death, The Seventh Seal, where he portrayed the Knight who plays chess with Death. Comparing this 1957 classic film with What Dreams May Come reveals some of the ways Western culture has shifted over the intervening decades.

1. What was your initial or immediate reaction to the film? Why do you think you reacted that way? 2. What is the message of the film? Consider how Ponette addresses each of the following: 1) the nature of faith 2) the meaning of death 3) the possibility of life after death 4) the existence of God 3. Where do you agree? Where do you disagree? Why? 4. In what ways were the techniques of film-making (casting, direction, script, music, sets, cinematography, editing, etc.) used to get the film’s message across, or to make the message plausible or compelling? How were camera angles used to help bring us into a four-year-old’s life? 5. Who did you identify with in the film? Why? Who were we meant to identify with? 6. Many reviewers saw the film’s ending in very negative terms. Leonard Malkin, for example wrote that “the ending is a cop-out.” Roger Ebert says “the ending is an imperfection in a film of great imagination and close observation.” Given the message or world view developed within the film itself, how do you interpret the final scenes? Why? 7. What is a Christian view of grief? What are the implications for understanding grief, and for responding to the grief of others, in terms of each of the four great biblical categories: Creation, Fall, Redemption, Consummation? What inappropriate responses to grief are sometimes evidenced in the Christian community?