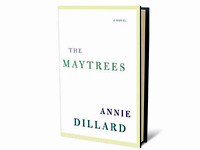 In Pilgrim at Tinker Creek (1974) she invites us to pause with her beside a stream of water, and so transforms how we see not just that tiny slice of creation in Virginia, but all such slices that we usually glance at but do not truly see. Dillard reflects deeply on what she sees, and so presses past the surface to the reality towards which all creation points. Pilgrim at Tinker Creek is not merely a book about nature but about transcendence, a wonderfully crafted meditation on creation’s silent shout of glory.

In The Maytrees (2007), Dillard turns from non-fiction to fiction. It’s the story of Toby Maytree and Lou Bigelow, who meet, marry, and live in Provincetown, on the very end of the tiny spit of curling peninsula known as Cape Cod. Surrounded by sand dunes, hemmed in by ocean, and covered by a sky more immense than the sea, life seems stripped to the essentials. The small community in which they live is surprising, peopled with artists and misfits, individuals not impressed with cultural measures of success and propriety. It is also a fallen place, and the brokenness fragments their relationship, leaving Lou to raise Pete while Maytree moves to Maine with another woman who had long lived homeless among the dunes. Years pass, and when Maytree brings Deary back to Provincetown to die, Lou, Pete, and Maytree must face one another, their past, and wrestle with the meaning of forgiveness and reconciliation.

One of the delights of this novel is Dillard’s keen ability to observe human beings as they truly are. Bringing insight into people, community, relationships, and the stark loveliness of Cape Cod, it’s like we are there—or that we’d dearly love to be. The story unfolds quietly, for blessing and curse, a story related to the issues we all face in our desperate quest for meaning and transcendence in this sad, fragmented world.

One day the Maytrees’ life is interrupted when a stranger, driving through town, hits Pete as he rides his bike. Pete would recover from a broken bone.

—It might not all be the man’s fault, she had said when they came down.

Gently Maytree knocked over his chair and cursed back and forth and in toto implied in rare words that he, by contrast and on balance, found the man grievously at fault. The series ended “son of a sea-cook.”

Maytree sat and covered his face with his hands. Lou found herself by habit checking whether his sweater’s elbows rested on spills. He rubbed his eyes. These last two or three weeks, something bad had worsened. Lou did not know what, but it was her, something about her. He had been close-shaven or unshaven, gone to the dunes, sleepy, jumpy. In her company he wrapped himself in misery like a robe. Between them self-consciousness bulked as a river silts its channel. They sat to smoked mackerel and turnips and plied Petie with questions. Only these few weeks. They chewed and chewed. She dumped her plateful and washed. She sought to avoid him and secure privacy.

Sometimes these past weeks at dawn he started between them a deliberate chat. And what’s your plan for the day? His bad acting was worse than silence. When friends came by, both of them roused: they ate, and Maytree told knock-knock jokes.

During all their other years’ short silences—but not this one—while they slept, while stars held fast their spots beyond the window and seas concussed the beach, they woke together as if at a temblor. They turned and rolled. They met and sought and hit. Then they talked under the blankets, holding each other’s arms or ribs or hands. She searched out his eyes in the dark, and regarded him in the long way of longing and knowledge, and in the longer way of love. There had not been much of that this past year.

Now he was crying. He rose and held her as if he just remembered something. Tears traced his face creases and dripped. She held him. Crying—Maytree? He had sniffled a bit when his mother died. They disliked drama.

—I will always love you. Believe me.

Now what. She removed her arms and stepped back. Fast as shock she knew now what, what alone could come next, and her blood in every vessel tripped. Not her Maytree. Never her Maytree, who loved her, as he just unsaid.

Annie Dillard surprised me in Pilgrim at Tinker Creek by writing exquisitely not just about the beautiful, the gentle, and the fragile that she observed, but about the cruelty, the hard, and the relentless competition she observed in life along the flowing stream. Moths circling the flame of a candle and the delicate wings of a dragonfly both exist, and so must be accounted for in the cosmic scheme of things. So too with commitment and disappointment, with presence and absence, in a world where no amount of trying guarantees we can live happily ever after on our own terms.

I have one criticism of The Maytrees, though I hope mentioning it will not discourage you from reading and discussing it. Occasionally Dillard’s prose becomes unnecessarily convoluted, and she uses terms I had to stop to look up. I appreciate being stretched by an author, but this time it occurred too frequently and seemed to run counter to the brilliant simplicity of the story.

Good stories transport us into new places, to meet people who live only in imagination but who might, nevertheless, help us be more fully alive. Annie Dillard has written a very good story in The Maytrees, exploring themes that touch us all: relationship and love, the wound of abandonment, the constant need for forgiveness and reconciliation.

1. Read aloud paragraphs, pages or brief sections of the novel that stood out to you as particularly striking—for whatever reason.

3. Describe Provincetown, and its surroundings, as Dillard painted it as the setting for this story. How does geography play a role in the trajectory of the plot? Would you like to live in this place? Would you like to be part of this community of people? Why or why not?

4. Do you find the story plausible? Why or why not? What emotions did you experience as the story unfolded? To what extent did you “enter into” the world of the story?

5. Who is telling the story? Whose voice do you hear? (Is it the person going through the experience, or someone else telling you about that person?) How does the relationship between the narrator and the implied listener help the reader focus on what’s important about the character(s)?

8. Did Lou forgive Maytree? Did she forgive Deary? Did Maytree seek forgiveness? To what extent was there true reconciliation between them? How does Pete fit into this?

9. What does The Maytrees say about the nature of love? Of marriage? Of community? What does it say about the meaning of life, and the search for significance and spirituality?

12. How has The Maytrees changed or deepened, your understanding of, or appreciation of life? Of marriage, relationships, and community? Of geography? Of forgiveness and reconciliation?

13. If you did not enjoy this work, is there a reason why you should encounter it anyway? Would you recommend this work of fiction to others? Why or why not?

14. How would you describe the work—and your reaction to it—in a way that would make sense to a Christian friend? To a non-Christian friend? Do the two descriptions differ? Why? Should they?