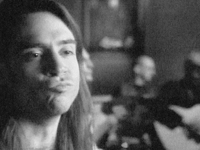 It was one of those rare moments in life. It’s only happened twice to me, that I remember exactly where I was and what I was doing when I heard a song for the first time. It was 1993 and I was in a theater waiting for a movie to begin, which movie I do not remember. Between films the theater streamed a local rock radio station through their sound system. The music had been unremarkable, a series of apparently popular and forgettable songs that seemed to have more in common with marketing than they did with art. It was almost time for the movie to begin.

The next song was one I hadn’t heard, and suddenly I found myself hoping the movie wouldn’t begin before it finished. It opened with rhythmic scratchy sounds imitating the flaws on an old vinyl record, and after a moment the scratches merged into the percussion of the song. A rich bass-baritone voice—uncommon for rock vocalists—sang lyrics that told a mysterious story, painted impressions in my imagination, and creatively touched on some of the deepest questions that human beings have raised since the dawn of time. I loved the sound, the arrangement, the choice of instruments, the vocal performance, the lyrics. After the movie I stopped by a record store to get a copy of the album.

Really good music, of every genre, is always about more than mere entertainment. The musician expresses realities that are best communicated through metaphor, sound, poetry, and the allusive beauty of art. When we truly receive the music rather than just casually listen, we end up seeing more deeply into life, in part or in whole, for blessing or for curse.
Good music is an expression of the artist’s deepest yearnings, fears, hopes, dreams, and worldview. Music is more than that, of course, but it is certainly that. And because the artistic gift involves seeing with clarity, the art that is produced often helps to both shape and reflect the artist’s culture and times.

So, for those of us who take Christian faith seriously, listening to the music crafted by artists who raise challenges to our faith is not just interesting but vital. It’s a good way to hear the doubts and questions that we need to address if we are to live out and talk about our faith in a way that can be appreciated and understood in our pluralistic world. This is the purpose of this series of articles. (The first is posted on Ransom’s web site—the song was “It Ain’t Necessarily So” from Gershwin’s classic American opera, Porgy and Bess.)

There is some risk here. That some might think I am only concerned for the lyrics of the songs, or that I’m reducing them to their theological content. Doing so would mistreat the music and the artists. Nor am I suggesting that all the musicians produced these pieces to criticize the Christian faith, which I don’t think is true. An artist’s convictions naturally tends to shape their work, so their doubts and beliefs, positive and negative, will make some appearance. I expect non-Christian artists to produce art with integrity, and that means that they will, occasionally at least, raise challenges or questions or criticisms of Christianity. What I am arguing here in this series is that the music involved can still be lovely, meaningful, and help us as Christians see more clearly.

Such is the song I heard that day in the theater. “God Shuffled His Feet” by the Crash Test Dummies, with lyricist and lead vocalist Brad Roberts.

After seven days
He was quite tired, so God said:
“Let there be a day
Just for picnics, with wine and bread”
He gathered up some people he had made
Created blankets and laid back in the shade

The people sipped their wine
And what with God there,
they asked him questions
Like: do you have to eat
Or get your hair cut in heaven?
And if your eye got poked out in this life
Would it be waiting up in heaven with your wife?

God shuffled his feet
and glanced around at them;
The people cleared their throats
and stared right back at him

“God Shuffled His Feet” is a richly creative song, with the percussion, instrumentation, arrangement, and vocals befitting the lyrics. It is a song that has a child-like simplicity and charm while evoking questions that are raised by people of all ages. What happens after death? And what about the heartaches, disappointments, and disabilities suffered in this broken world? Even if they are repaired, what about the lost years and dashed hopes that dogged us for an entire lifetime? Even if the pain is somehow dulled or forgotten, the pain was still a tragic reality that can’t be erased. Even if evil is somehow done away with at the end, the scars its ravages carved across souls and time remain a reality, and will remain in memory unless heaven is the rough equivalent of a lobotomy. Doesn’t that matter? Can even God deal with such a reality?

So he said: “Once there was a boy
Who woke up with blue hair
To him it was a joy
Until he ran out into the warm air—
He thought of how his friends would come to see;
And would they laugh,
or had he got some strange disease?”

God shuffled his feet and glanced around at them;
The people cleared their throats
and stared right back at him

The people sat waiting
Out on their blankets in the garden
But God said nothing
So someone asked him, “I beg your pardon:
I’m not quite clear about what you just spoke—it
Was that a parable, or a very subtle joke?”

God has answered, but the answer is insufficient—an answer that intrigues, but that fails to satisfy. And so in the world of the song we are stuck, in a sort of limbo, our questions made sharper with the sense that the God who should be able to answer refrains from doing so. Or even worse, possibly cannot. So trust is rendered impossible. And with no trust, no real relationship is possible.

This song, it seems to me, is not an angry fist shaken against the sky but a sorrowful lament. God’s existence is not challenged, but hard questions about hope, redemption, sorrow, and eternity—which both children and adults raise—go unanswered.

I believe Brad Roberts and his band are on to something. I hear the same issues being raised by lots of people. And I notice that many Christians find it difficult to field thoughtful responses to those issues that seem satisfying and compelling. Actually, I’ll go one step further: most of the descriptions of heaven I hear make me certain of two things: the description does not reflect what the Bible teaches about the new earth, and the heaven they describe (made of metal, worship-service-forever, little if anything else, spiritual without the problematic physical) is not particularly the sort of place most people yearn for as a spot to live forever.

Which leads to some great questions. What is the Christian hope? What does it imply for the disappointments and illnesses we suffer? Why do common descriptions—by Christians, mind you—of heaven and eternity so often seem unattractive? And what do the Scriptures really teach about this? After all, if it is our true home with our true Father, if it is the final destination, and if it embodies the full purpose of all of history, then we can be certain the Christian hope will not only fulfill the very deepest yearnings of the human heart, it will do that and far, far more.

It sounds as if Brad Roberts, like many others, hasn’t heard about that hope. And sadly, he won’t hear about it from many Christians today or in many churches.

“God Shuffled His Feet” reminds me we have work to do. And I am grateful for the reminder, even as I am touched by the music’s beauty, a glimpse of glory of a God who does not shuffle but strides through human history with redemption.
The Crash Test Dummies have stronger things so say, sharper challenges to raise in other songs.

This is a song I cannot hear without great sadness, a realization that for many the worship of Christians is not a mysterious wonder but an embarrassing spectacle. Those of us who are in traditions where lurching and shaking is not part of the liturgy are not, however, off the hook. It is worth asking whether our service of worship is inviting to those who are non-Christians and even unchurched. Like people who chatter without thinking and end up being misunderstood, our worship can get stuck in mindless repetition rather than expressing the freshness of the gospel.

An invitation to my readers: I will happily include material from you in future articles in this series. Send me by email the name of the song, the artist(s), album title, the full lyrics, and a brief reflection (max 500 words) on what you hear. Are questions being raised, or a challenge issued, or disillusionment explored, or an alternative belief proposed, or anger expressed? What should Christians hear in, appreciate, learn and take from the song? Write so that both Christians and non-Christians can enter the conversation comfortably. Though you will retain the copyright, submitting grants me the right to edit, publish, and post your submission on Ransom’s web site.