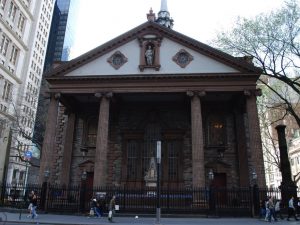 Quiet in the center of a storm
On 9/11 Americans watched in growing horror as planes flew into skyscrapers in lower Manhattan, as desperate victims hurled themselves to their death to escape the fires in the top floors, and then as the towers, seemingly against logic collapsed on themselves into a tangled mass of crumpled steel, burning rubble, dust, and bodies. Over the next days, weeks, and months, emergency worked dug through the smoldering mess trying to find first, survivors and then when hope was past, bodies. The images of Ground Zero and of the workers attempting to clear the many tons of debris from the site have become iconic metaphors in the shared American experience of the 21st century.

Less well known, close to one of the buildings of the World Trade Center complex, a small church, St Paul’s Chapel, somehow escaped destruction. It became a place of rest and restoration for the weary workers at Ground Zero. Musicians came to quietly play, congregants and friends brought and served millions of fresh meals, shoulder and foot massages relieved pain and tension, and pews were set aside so much needed naps could be had. The Chapel became a place of quiet in the very middle of a deeply tragic and traumatic storm of death and terror.

Light at Ground Zero, published by Square Halo Books, tells the story of St Paul’s after 9/11 simply, through pictures accompanied by texts of Scripture. From the beginning of the tragedy, the rector of St Paul’s invited a photographer he trusted, Krystyna Sanderson, to record her impressions for posterity. Light at Ground Zero is part of that record of memories that should not be forgotten. Sanderson records her impressions in words in a brief preface:

The ashes of those who perished were everywhere—on the boots of the relief workers, on our clothes, in the air we breathed. We all knew we were walking on holy ground. Like diamonds that are created when carbon is under tremendous pressure, diamonds of heroism and love emerged from the explosion of 9/11. I witnessed these diamonds emitting a luminosity too bright to capture on film, a light that lightens the darkness of disbelief, shock, incomprehension, and grief, the light of God’s love and mercy and grace.

Get a copy of Light at Ground Zero for your coffee table, and one to place beside the bed in your guest room. We simply cannot have too many reminders that by God’s grace, places of quiet actually can exist in this broken and sad world.