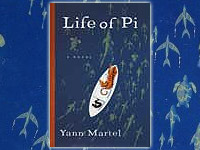 On the first day of vacation I purchased Life of Pi, a novel that has been winning accolades for Canadian author Yann Martel. It wasn’t the awards that piqued my interest, but a brief review which said the book was “packed with curious disquisitions on philosophy, zoology, linguistics and God.” As I stood in Barnes & Noble I opened to the flyleaf, and read:

A boy.
A tiger.
And the vast Pacific Ocean.
This is a novel of such rare and wondrous storytelling that it may, as one character claims, make you believe in God.
Can a reader reasonably ask for anything more?

But since I am aware that publisher’s blurbs sometimes are more in tune to marketing than the prose they advertise, I opened to page one, began reading, and was hooked. My plan had been to savor it over the course of the entire vacation; I finished it in two days.

Some readers may find the story of Life of Pi so fantastic, so unbelievable that their credibility is strained so badly that they set the novel aside. That would be a mistake, since the very notion of what is credible in life—of what we believe is true and why we believe it—is a central theme in the book. Or it may cause them to skip ahead to read the final chapter, to see if credibility is restored in the end. That too, would be a mistake, since the end involves a surprise integral to the exploration of truth and faith which Martel intends us to experience.

Life of Pi can perhaps best be understood as a novel containing three levels. First, there is the story of Pi, a sixteen-year old traveling with his family who have chosen to move from their native India to Canada. Pi’s father is a zoo-keeper, and so the cargo ship on which they travel is laden with cages of animals which Mr. Patel has sold to various zoos in North America. Then, suddenly in the middle of the night near the equator in the Pacific, the Tsimtsum sinks, and Pi finds himself marooned on a lifeboat with another survivor of the tragedy, a 450-pound Bengal tiger named Richard Parker. How they survive 227 days at sea is the adventure that animates Life of Pi. On another level the novel is an exploration of zoos, their management and ethics, the life cycle of various animals, and something of what is required to survive in a lifeboat adrift in the Pacific.

Martel is a wonderful writer, weaving fact and fiction so seamlessly that learning about zoos is as fascinating as Pi’s adventure. On the deepest level, however, Life of Pi is a meditation on faith, its relationship to truth, science, and religion, and the centrality of story to finding meaning in life—all viewed from a profoundly postmodern perspective. In this novel, a new high is achieved in religious tolerance: Pi is a Hindu, a Moslem, and a Catholic, simultaneously devoted to practicing all three without ever seeing even the possibility of conflict between them. After his ordeal at sea, Pi eventually attends college in Toronto, with a double major in zoology (his thesis was on the South American three-toed sloth) and religious studies. “The three-toed sloth,” he tells us,

…lives a peaceful, vegetarian life in perfect harmony with its environment. ‘A good natured smile is forever on its lips,’ reported Tirler (1966). I have seen that smile with my own eyes. I am not one given to projecting human traits and emotions onto animals, but many a time during that month in Brazil, looking up at sloths in repose, I felt I was in the presence of upside-down yogis deep in meditation or hermits deep in prayer, wise beings whose intense imaginative lives were beyond the reach of my scientific probing.
Sometimes I got my majors mixed up. A number of my fellow religious-studies students—muddled agnostics who didn’t know which way was up, who were in the thrall of reason, that fool’s gold for the bright—reminded me of the three-toed sloth; and the three-toed sloth, such a beautiful example of the miracle of life, reminded me of God.
I never had problems with my fellow scientists. Scientists are a friendly, atheistic, hard-working, beer-drinking lot whose minds are preoccupied with sex, chess and baseball when they are not preoccupied with science.
I was a very good student, if I may say so myself. I was tops at St. Michael’s College four years in a row. I got every possible student award from the Depart-ment of Zoology. If I got none from the Department of Religious Studies, it is simply because there are no student awards in this department (the rewards of religious study are not in mortal hands, we all know that).

Yann Martel is well equipped to write a cross-cultural novel. Born in Spain in 1963, he has lived or spent time in Costa Rica, France, Mexico, Alaska, Iran, Turkey, India, and now lives in Montreal. After studying philosophy in college, he began earning his living as an author in 1990. He is a wonderful writer, with spirited prose, fine wit, and the ability to spin even an outrageous tale and keep us interested. “If Canadian writer Yann Martel were a preacher,” Charlotte Innes says, “he’d be charismatic, funny and convert all the non-believers. He baits his readers with serious themes and trawls them through a sea of questions and confusion, but he makes one laugh so much, and at times feel so awed and chilled, that even thrashing around in bewilderment or disagreement one can’t help but be captured by his prose.”

Some of the most mystifying and frustrating aspects of a postmodern consciousness for the Christian—an unswerving commitment to tolerance, and the blithe dismissal of traditional religion in favor of a subjective, individualized, and syncretistic spirituality—are central themes in Life of Pi. I don’t mean they are merely assumed by the author (though they are); they are also discussed at length, and then, because Martel is a master story-teller, they are made plausible by the Life of Pi, and by the stories he tells to make sense of it. “Life of Pi is a fascinating story filled with… elements of faith, truth, terror, bravery and wonderment in generous portions,” comments one reader who was late for work because he couldn’t put down the book. “Some of it seems far fetched,” he continues. “But, who are we to judge? This is a novel based in truth. The question is, which truth? Whose truth? You will not be disappointed.”

In a culture where truth is up for grabs, Life of Pi is a novel that is a delight to read for the craftsmanship of its prose, and that is worth reading as a window of insight into our postmodern and post-Christian world. It is this world we are called to engage with the gospel, telling the Story of Jesus in all it’s mind-boggling mystery so that the Creator of Bengal tigers is revealed to be the all-attractive King and Redeemer.

1. What was your reaction to Life of Pi as you read it? Why do you think you responded the way you did?

2. Who is telling the story, whose voice do you hear? What significance does this have for the story? What does Pi stand to lose and/or gain within the story? What is he trying to seek or avoid? What is most important to him?

4. What role does Richard Parker play in the story? The other animals we learn about? 5. Within the world of the story, examine the assumptions or statements that are made about reality, morals, and the meaning of life. More specifically:
a.) Is there a God? If so, how is he/she/it portrayed? Do characters exhibit a sense of transcendence? How is spirituality portrayed? How are human beings portrayed, and what is their significance? How are nonhuman creatures portrayed?
b.) What is the basis for truth and morality? Is there anything that’s truly true? What makes it so? What is the relationship of faith and truth? Is there right and wrong?
What makes it so? What really matters? How is tolerance defined? In chapter 23, there is a debate between Pi’s Hindu, Christian, and Moslem teachers, while Pi insists that he must accept all three faiths. What is Pi seeking in this religious quest?
c.) What is the meaning of life and reality? What makes it so? What happens at death?
d.) What motivates Pi? What does he value most and work hardest to obtain? What tests him in his undertaking? What results from their choices? Does Pi succeed or fail in their quest? How do you know?

6. Does the world and life view in the fictional universe of the story resonate with or fail to resonate with the biblical Story of Creation, Fall, Redemption, and Consummation? Where is there agreement? Where is there disagreement? What in this regard is made attractive in Life of Pi? To the extent the work contains ideas and values which are Christian, are they inclusively or exclusively Christian?
How do you respond to Pi’s alternative story which he tells the Japanese investigators? To Pi’s question about which story they prefer? What is the significance of this ending? 7. How has this work of fiction affected you? If you did not enjoy Life of Pi, is there a reason why you should encounter it anyway? Would you recommend this work of fiction to others? Why or why not? How would you describe the work—and your reaction to it—in a way that would make sense to a Christian friend? To a nonchristian friend? Do the two descriptions differ? Why? Should they?
8. To what extent does this work act as a window of insight into some aspect of life, culture, and reality? To what extent can it be a point of contact with those who may not share your deepest conviction?