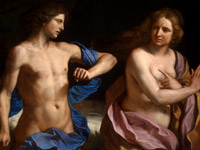 First a story, then a question.

The story
A young man has fallen in love with a very beautiful woman. He doesn’t think he’s ever met anyone as attractive as she is, in fact he’s sure of it. Being in love can feel almost like pain, a gnawing ache that simply won’t go away. It’s all very frustrating; he wants to be with her so much that when they’re apart, he feels sick. Being separated from her is almost more than he can bear, and she’s always on his mind. He thinks about her so much, in fact, that he’s had trouble sleeping. It’s gotten so bad that one friend who stopped by to see him reported he is starting to look rather worn-out. What he really wants, he says, is to be with her, to be alone with her, and sometimes he dreams of making love with her. Before he fell in love he had been busy with other things, but now he spends a lot of time making plans to be with this glorious creature. Her father is a force to be reckoned with, and so he’s enlisted the help of some friends to arrange a time when he can see her, be with her. And then, finally, at last, the moment arrives, and they are alone.

The question
That’s the story, and now, here’s my question: is this true love? Or is it something that just masquerades as love?

It does sound rather like a movie, doesn’t it?

Imagine it. When a story like this is spun out on the big screen, complete with a good-looking cast, flashes of wit, and music which tugs at our hearts we seldom even think to ask the question, let alone bother to answer it. Or, more accurately, the answer seems self-evident in such movies—of course it’s true love. What else could it be? Everything in the film pushes us to believe it is love, and doubts, if they arise at all, merely serve to ruin the atmosphere of a pleasantly romantic evening.

The answer
But the story isn’t a movie; it really happened. It’s in 2 Samuel 13, where the Bible describes how Amnon felt about Tamar just before he raped her. [1]

It’s very easy in a fallen world to confuse the real with what only seems real. If we don’t have a solid way to discern between the two we’ll sooner or later be taken for a ride. And unreality, like its twin, nontruth, always leads to death. When the Scriptures assure me that God’s Word is a lamp to my feet and a light for my path, [2] it is throwing me a life-preserver while I’m bobbing in the waves. To be able to distinguish between what is real and what only looks real—that is a part of wisdom. Christians too busy to study the Bible are like people overboard in the storm who refuse the life-preserver because they’re determined to make it on their own—what we could call drowning-with-dignity. If your law had not been my delight, the psalmist says, I would have perished in my affliction. I will never forget your precepts, for by them you have preserved my life. [3]

Central to the wonder of art, including the art of the cinema, is the way it kindles and inspires the imagination. C. S. Lewis pointed out that we all “seek an enlargement of our being. We want to be more than ourselves… We want to see with other eyes, to imagine with other imaginations, to feel with other hearts, as well as with our own.” [4] Like literature and all art, film can transport us into a story that is not our own, sweeping us up in an adventure which transcends the details of our lives. When the lights go down, we enter another world. That is part of the good gift of God in art, and it can be enjoyed—as long as we remember, in Steve Garber’s words, to not leave our minds at the box office. For, when we enter the world of film we are entering a world created by fallen people.

Seeing through another’s eyes can help us know the truth even when those eyes are blinded by unbelief. I could never imagine, for example, how people could live in a world without God and without hope, until Woody Allen allowed me to view life through his eyes in his films—and for that I am profoundly grateful. But film, like all of art, is also able to make nontruth seem plausible, to confuse the difference between what is real and what only looks real—and that is a serious danger in a fallen world.

Good art—whether painting or literature or music or film—fires the imagination with truth, goodness, and beauty. The story of Amnon and Tamar, part of God’s Word to us, effectively identifies the raw feelings which so often masquerade as love in a culture which has no higher standard for love than personal experience. Amnon and Tamar’s story doesn’t just distinguish between the two, it drives the point into our hearts and minds and imaginations like a wooden stake. Meditate deeply on Amnon’s unreal love (the biblical term for it is lust, actually), and suddenly part of our path—and a lot of films—will be brought under the revealing light of God’s Word.

It is not love; not even close. It is not love at all, and the tragedy of so many broken lives all around us are an added confirmation of how many have believed a lie.

The Scriptures warn us that when we live in a fallen world among people who do not share our deepest convictions we should not be surprised that lies are made to look like the truth. What we worship shapes our values, and what we live for and adore will mold our view of life and the world. That’s what idolatry is all about, and whether the idol is Baal or Freedom, or Consumerism, or Feeling Good really doesn’t matter. When there are idols about, there will also be lots of lies, myths and false values which flow out as a result. [5] Imagine Feeling Good to be the final end of life—and your definition of “true love” will quickly become a recipe for disaster.

The proper response is not isolating ourselves from our culture. It was to this place, this culture to which we have been called. The proper response is to have our insight so deepened by the Scriptures that we live increasingly faithful lives. Allowing God’s Word to be our light, in concert with the community of God’s people, we can learn to discern between what is real and what only looks real. Part of discernment will include identifying our areas of weakness so we can stay away from those films which tempt us to sin. And part of discernment will help us watch all films with imaginations, hearts and minds so fired by the reality of God and his Word that we can appreciate a good story without swallowing a well-told lie.

Endnotes:
1. Don’t take my word for it–look it up and read it. This is one of those passages (in my experience, at least) that is rarely studied, but which has much to teach us.

5. This is why faithfulness to God is always linked to faithfulness to his Word, and why on the other hand, worshipping idols always leads to immorality and unfaithfulness. Knowing, doing, and feeling are always related. See, for example, Psalm 115 and Isaiah 44 on idolatry.

[1] Don’t take my word for it—look it up and read it. This is one of those passages (in my experience, at least) that is rarely studied, but which has much to teach us.
[2] Psalm 119:105.
[3] Psalm 119:92-93.
[4] An Experiment in Criticism (Cambridge University Press; 1961) p. 137.
[5] This is why faithfulness to God is always linked to faithfulness to his Word, and why on the other hand, worshipping idols always leads to immorality and unfaithfulness. Knowing, doing, and feeling are always related. See, for example, Psalm 115 and Isaiah 44 on idolatry.