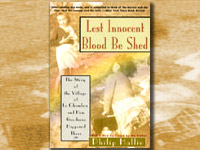 Philip Hallie remembers the day of discovery well. He was in his office reading documents from the Holocaust. Dr. Hallie, a professor of philosophy at Wesleyan University in Connecticut interested in ethics, was in the midst of a lengthy study of human cruelty, “the slow crushing and grinding of a human being by other human beings.” Hallie had narrowed the scope of his research: he was studying the horrifying medical experiments the Nazis conducted on children in the death camps. Like other researchers who have had to look evil in the face, Dr. Hallie steeled himself against the horror of his work. He managed to maintain such objectivity that the dull, endless repetition of torture became almost boring. He “could look upon torture and death without a shudder,” he notes. “Reading about the damned I was damned myself, as damned as the murderers, and as damned as their victims. Somehow over the years I had dug myself in Hell, and I had forgotten redemption.”

On this particular day, however, something unusual occurred. Included in the documents which Dr. Hallie was reading was a brief article about a small village, Le Chambon, in the south of France. The article recounted how the people of this mountain village, under the leadership of their courageous Protestant pastor, saved untold numbers of Jews from the Nazis. As he read, Dr. Hallie was surprised to discover that he was crying. He left his office and went home. Later that night, unable to get the story of Le Chambon out of his mind, he lay awake in the middle of the night, weeping. Leaving his bed, he walked back to his office and reread the brief article. Hallie realized that the brave people of Le Chambon would now be reaching old age, and soon their story would be lost. Determined to make certain that did not occur, within a year Dr. Hallie was in Le Chambon, and Lest Innocent Blood Be Shed is the result. It is a story of faith and courage, of ordinary Christians who lived lives of integrity, even at great cost. The people of Le Chambon believed in the preciousness of human life, that every person was made in God’s image, and they put that belief into practice.

An incident from the beginning of the story is characteristic of the entire book. In the third year of the German occupation, on the evening of February 13, 1943, a police car pulled up to the home of Rev. and Mrs. André Trocmé in Le Chambon. The pastor was not at home, and his wife, Magda, after quickly helping the refugees in her living room to hide, opened the door. The police asked her where her husband was, to which she replied she didn’t know—he had gone out to visit members of the congregation. He would be home soon, she said, and invited them to wait in the pastor’s study.

Magda Trocmé invited the two policemen to have dinner with them. Later, friends would say to her, “How could you bring yourself to sit down to eat with these men who were there to take your husband away, perhaps to his death? How could you be so forgiving, so decent to them?”

To such questions she always gave the same answer: “What are you talking about? It was dinnertime. They were standing in my way. We were all hungry. The food was ready. What do you mean by such foolish words as ‘forgiving’ and ‘decent’?”

Magda Trocmé was not the only citizen of Le Chambon who scoffed at words that express moral praise. In almost every interview I had with a Chambonnais or a Chambonnaise there came a moment when he or she pulled back from me but looked firmly into my eyes and said, “How can you call us ‘good’? We were doing what had to be done. Who else could help them? And what has all this to do with goodness? Things had to be done, that’s all, and we happened to be there to do them. You must understand that it was the most natural thing in the world to help these people.”

We recommend Lest Innocent Blood Be Shed to you. Though written by a philosopher after careful study, this is a not an academic exercise in ethics, but a well-written, compelling story of Christians who lived out what they believed. It is a story of ordinary people who became extraordinary, not by attempting something spectacular, but by being faithful in the ordinary of their lives. In a day when so much around us works subtly to sever the connection between belief and behavior, this is a story of faith, courage, and true heroism which needs to be read, told to the next generation, and imitated.

Lest Innocent Blood be Shed: The Story of the Village of Le Chambon and How Goodness Happened There (Philip Hallie, 1979)