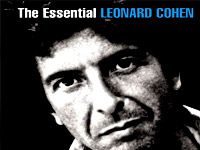 The first song I heard by Leonard Cohen was Suzanne, a song that brilliantly captured the spirit of the Sixties.

Suzanne takes you down to her place near the river
You can hear the boats go by
You can spend the night beside her
And you know that she’s half crazy
But that’s why you want to be there
And she feeds you tea and oranges
That come all the way from China…
And you know that she will trust you
For you’ve touched her perfect body with your mind.

The lyrics hint at but don’t quite tell a story, drawing us inexorably into a world of sensuality and beauty. The second verse, where

parallels the images drawn of Suzanne. The world is not just sensual and beautiful, Cohen seems to insist, but spiritual in a way that is beyond our imagining. It is also a world of deep sadness, of unfulfilled yearning, which the haunting melody reinforces. Cohen wrote the lines in celebration of a friendship with a young dancer named Suzanne Verdal, but the song transcends the reality of that relationship. Suzanne captured both the essence of an era, and a darkly attractive world view where intimacy, mysticism, and melancholy are forever fused.

When Suzanne hit the charts, however, it wasn’t sung by Cohen but by Judy Collins. Collins and Cohen met through a mutual friend; that first evening in Collin’s living room Cohen sang several of his newly written songs. “He sang Suzanne and Dress Rehearsal Rag,” Collins recalls, “sitting on the couch, holding the guitar on his knee. I was moved by his singing voice, and by the songs, and by his whole presence. There was something very ethereal and at the same time earthy about his voice.” Collins not only used his songs on her next album, she coaxed him to sing “Suzanne” at one of her concerts. Cohen’s career as a songwriter and singer was launched.

Leonard Cohen hadn’t set out to be a musician, but “aspired to be a minor poet,” to use his words. His first collection of poetry, Let Us Compare Mythologies, was published in 1956 when he was still an undergraduate. Poetry has remained a passion, and Cohen’s thoughtful and finely crafted lyrics is one reason why his music is so powerful.

The other reason Cohen’s music is so powerful is the profound sense of yearning which infuses it—and which is echoed across the entire fabric of his life. As one critic notes, Cohen has from the beginning kept “one eye firmly on the times and one eye on the timeless.”

Long interested in Buddhism, in 1994 Leonard Cohen moved to a cabin at the Zen Center on Mt Baldy in California. There he lived under the spiritual guidance of Joshu Sasaki Roshi, twenty-first in a long line of Japanese Zen masters, in a community dedicated to the study and practice of Rinzai Zen Buddhism. It is an austere setting, the daily schedule is rigorous (students must rise between 3 and 4 am to begin their day), and for extended periods Cohen has cared for the aging Roshi. “This sort of practice will never become trendy,” Cohen says. “It’s too hard. It’s not exactly religion. Men need religion, because man needs something to hang on to. So if you consider the canon of the sutras or the image of God as a separate, objective thing, so much the better if it works for you. In any event, I feel that the great religions have reached their capacity of believers and that a great many people are searching for alternate forms of worship. Here, there’s no worship.” (If that statement seems somehow incomplete, or paradoxical, or even self-contradictory, realize it is very Zen.) In 1996, in an ancient Buddhist ritual, Leonard Cohen was ordained a Zen monk, taking the name, Jikan. In 1999, Cohen left Mt Baldy for Los Angeles, and in 2004 released his 13 th album, Dear Heather. Now 71 years old, still writing songs, there is talk of Cohen planning another world tour.

Buddhism is attractive in our post-Christian society, and for many, more attractive than what they understand as historic Christianity. For a generation which is keenly aware of the sad brokenness of the world, it offers enlightenment without rules. Cohen does not write “Buddhist songs,” but if you have ears to hear, a Zen consciousness permeates his music. A Buddhist reviewer said that Cohen “is still focused on the sad, the poignant, and the deeply confusing aspects of life… We Buddhists see this life as short, and subject to many discomforts, but we also see that developing a clear view of reality points us directly to love.” Which is why Cohen has written some of the most gorgeous love songs ever recorded.

Listen to Cohen’s exquisitely beautiful music and you will hear all that: a deep yearning for a glimpse of light, a profound sadness at the fragmentation of life in this fallen world, and always the hope of love.

The birds they sang
at the break of day
Start again / I heard them say
Don’t dwell on what
has passed away
or what is yet to be.
Ah the wars they will
be fought again
The holy dove
She will be caught again
bought and sold
and bought again
the dove is never free.
Ring the bells that still can ring
Forget your perfect offering
There is a crack in everything
That’s how the light gets in.
[From “Anthem”]