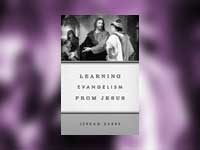 The longer I am an elder in the church the more dismayed I am at so many of the ideas held by Christians about evangelism. Some simply fear it, having been convinced it is a technique or method to use, dropping it into conversations with the dread that whatever happens next will be bad. Some insist it needs to include drawing a line about sin, ignoring the fact that the Scriptures forbid our doing so and insist it is the Holy Spirit’s job, not ours, to open people to the realization that they have shame and guilt that needs atonement. And some argue that such direct evangelism is counterproductive, and so opt for relational evangelism, hoping that their friendships will somehow communicate the truth of the cross to non-Christian friends.

A child of missionaries, I have been around evangelism my whole life. It was one factor in pushing me into a period of dark doubt that almost ended in unbelief. It was at this point in my life that I stumbled upon L’Abri through the books of Francis Schaeffer. I did not latch onto his writing hoping to learn about evangelism, a topic that I was not only supremely disinterested in but that filled me with disgust. I latched onto Schaeffer’s writings because for the first time Christian faith was seen as having something of significance to say to all of life and culture, as offering true answers to the deepest questions of meaning, beauty, life and death. It wasn’t until much later that I realized that in the process Schaeffer also taught me about evangelism. That it isn’t a program or a technique, a thing to do because you feel guilty, or an event to be planned. It’s rather a part of a life well lived, in friendships of growing intimacy, as the things that matter most are talked about and laughed about and as questions are asked so that hearts are shared, in all their glorious ruin. And later I realized that instead of being taught evangelism, I had been taught Christ—and there is the difference.

In Learning Evangelism from Jesus long-time L’Abri Worker and now Covenant Seminary professor Jerram Barrs walks through the Gospels to let us watch Jesus interact with people, some devout, some questioning, and all lost. His expositions are simple, direct, careful to honor the text, and always with an eye to letting us see Jesus more clearly so we can know what following him actually looks like.

Instead of retreating, isolating ourselves, and condemning unbelievers and our culture, Jesus calls us to something very different. He desires that we give ourselves to the understanding of the culture around us; he urges us to stop condemning the world and unbelievers; his passion is for us to listen to his prayer for us, that we might be in the world as he was in the world; he is eager for us to imitate him and to give our lives gladly to love and to serve non-Christians. His desire is that we be like him, and that we commit ourselves to developing intimate relationships with non-Christians. He wants us to teach our church members and our children to do the same—no matter what the belief system and the lifestyle of the people around us. [14] Learning Evangelism from Jesus is for people who love Christ and want to be like him. It’s for people who are sick and tired of evangelism, or scared of it, or disgusted by it, or convinced that it can’t be done except by fundamentalists who mistake the proper rejection extended to rude, unkind, judgmental strangers as persecution.

Full disclosure, here: Jerram is my friend. I have one son, named after him. Few people I know are as qualified to write this book, because few are as gentle, as compassionate, as winsome, as compelling, as unthreatening, as… well, as like Christ.

Please read Learning Evangelism from Jesus, and work through the study questions that are provided for each chapter. Like what the book teaches about evangelism, some of the questions will surprise you.