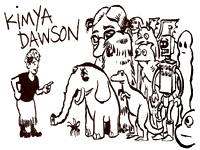 An Intimate, Authentic Revelation of Hearts

Kimya Dawson is best heard live in an intimate setting. The concert I attended was in a small venue near the University of Minnesota in Minneapolis. The Cedar Cultural Center seats 465, and the place was packed, 85-90% of the audience consisting, I would guess, of 15-25 year olds. They rocked out to the sound of the French band, L‘Orchidée d’Hawaï—the guy ahead of us swinging his dreadlocks in great arcs to the beat. By the time Kimya Dawson took the stage it was quite late, but her effect on the crowd was stunning. They listened to every song in intense, complete silence, seeming to be on the edge of their seats. It wasn’t so much that they acted like they were in the presence of a performer they loved, but more like they were with someone who knew their hearts and yet loved them enough to not walk away. As she sang, they did not sing with her, though it seemed clear many knew the lyrics. They wanted her to sing to them, to be reassured, for a few moments at least, that someone saw, could name, and was moved by the alienation, doubts, fears, hopes, and brokenness that have shaped their world.

There is a lovely paradox in Kimya Dawson’s music. Her songs are simple, childlike, almost childish in spots, yet they probe into the meaning of life. Her voice is clear and calm, yet her lyrics build intensely, rushing out in crowded lines as if pausing to catch our breath is something we cannot afford in the face of so much honesty. Depending on the song, she strums or picks her guitar, playing less with the air of an accomplished instrumentalist than like a close friend who cannot wait to let us hear her new song. And the seeming innocence of her lyrics and voice are held in tension with an earthiness in her comments between songs that can dip into coarse adolescent humor.

“Touching on a range of issues, from her mother’s declining health to her own fitness as a mother,” music critic Greg Smyth says, “Kimya seems drawn to the big themes: death, disease and one person’s relative insignificance in the world. All of which may sound incredibly pretentious on paper, but, when delivered in Dawson’s faltering vocals, what could easily stray into cloying sentimentality is strangely affecting.”

One song was written after a devastating earthquake deep in the Indian Ocean sent a tsunami ripping through villages on the coast on December 26, 2004:

one of her babies is rotting in the sun
and the other one was found drowned in the ocean
her mom and dad are in their van crushed and bloated
and her husband was thrown from his fishing boat
so please give me a break from all your complaining
about who was mean to you and how your stepdad is a pain
— i care, i swear, but i just can’t take it, not today
all i can think about are tsunamis and earthquakes

As he was producing the film, Juno, director Jason Reitman asked Ellen Page, who plays the lead character, Juno, which musician she thought her character would listen to. Kimya Dawson, she replied. It was a good choice, part of what made the film so fine and the soundtrack so memorable. In Juno, the soundtrack did not simply provide emotional background for what we see on the screen. Instead, music and plot were woven into a single story that spoke truth in beauty in the story of a young woman, in high school and pregnant, trying to find her way through the myriad choices of life.

No musician can speak for an entire generation, though some seem to have their finger on a generation’s pulse in a way that is uncanny. Such artists seem to have access to hearts, to see past surfaces to the deeper realities of life, to be able to reflect uncertainties and dreams that many seem to miss and few bother to name. Rather than preach, such musicians listen, and so have something to say. Kimya Dawson will not be loved by all of the postmodern generation, nor does she speak for them all, nor is every heart of that generation identical. Everyone is not Juno. But she speaks for many, and that is a grace.

i thought if I succeeded I’d be happy and they’d go away
but first thing in the morning I’d still wake up and I’d hear them say
“you’re fat, ugly, and stupid, you should really be ashamed
no one will ever like you you’re not good at anything”…

now people send me emails that say thanks for saying
the things they didn’t know how to say
and the people in my head still visit me sometimes
and they bring all of their friends but I don’t mind
I play my guitar like lightning
when I sing I like it when you sing too loud and clear
different voices different tones all sayin’ “yeah, we’re not alone”
I got good at feeling bad and that’s why I’m still here
[From “The Competition”]

Over the years I’ve asked numerous groups a question. I asked it one evening to a group of high school students, friends of my youngest daughter, as they sat in our living room listening with us to their music. I’ve asked it to college groups I’ve spoken to, and to classes in churches. I’ve asked it in coffee shops and in bookstores to groups who were hanging there. The question is this: How many of you know someone who committed suicide—or who tried seriously to end their life? Each time, the result has been the same: a majority of hands go up. I’ve also asked the question to groups my own age, and far fewer hands are raised. I don’t remember a single person committing suicide in my high school. Whether it happened or not is beside my point, which is this: does not this reality of death and sorrow shape the postmodern generation, a group who has also known first hand both the far-reaching fragmentation of the family and a growing clamor of voices doubting that any story exists to bring true significance to life?

A friend who is a physician at the Mayo Clinic observed that he had seen numerous farm accidents over the years. Legs ripped from sockets, hands mangled in machinery, objects thrust through bodies. In each case the pain is immense, the recovery difficult, but in no case, he said, did the sufferers ask to have their life ended. So, imagine, he said, the inner agony and chaos so many young adults must experience to drive them to such despair.

In our globalized world, more entertainment exists than ever before, more gadgets, more education, more opportunities. All true, all undeniable. But that does not suggest, as so many do, that life is therefore easier, that indecision is always irresponsibility, and that a failure to strive for success is always failure. Life is far richer than that. Christians who suggest such things are especially at fault—they forget a central tenet of their faith, which is that we are fallen creatures in a bent world, and our brokenness is total. Yes, whining is a problem, but those who can listen with maturity should be able to distinguish between adolescent complaining and a despair that is appropriate in the face of death.

Kimya Dawson listens—to her own heart, and, it seems, to the hearts of the young adults who flock to her concerts. We would do well to listen, too.