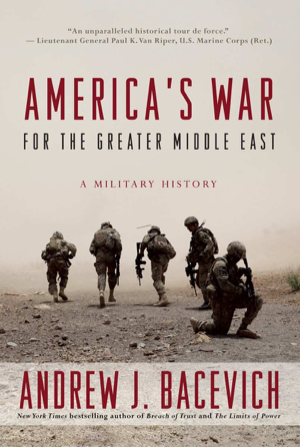 Early in America’s War for the Greater Middle East, Andrew Bacevich relates a simple yet striking fact. “From the end of World War II to 1980, virtually no American soldiers were killed in action while serving in that region. Within a decade, a great shift occurred. Since 1990, virtually no American soldiers have been killed in action anywhere except in the Greater Middle East” (p. 11).

This fact causes some rather obvious questions to spring to mind, questions that Bacevich sets out to answer in America’s War. What policies guide America’s use of military force in the Greater Middle East? What are we trying to accomplish there? Are we making good progress? What do we think we should do next? (The short answers: They are vague and keep changing. We don’t seem to know. No. Keep using more military force.)

America’s War, subtitled, A Military History, is not a happy read. It is an important read, however, for two reasons. First more generally, it provides an opportunity to think through how American foreign policy should be determined. The usual assumption is that America’s national self-interest will be the determining factor. Today, however, the argument is made that we should also use military force to protect innocent populations from insurgencies and dictators, and to buttress the work of diplomacy in promoting democratic governance, even if these tasks don’t seem to be in our national self-interest. America’s War allows us to reflect on these (often) conflicting demands. Second more specifically, America’s war for the Greater Middle East is ongoing, the daughters and sons of Americans are in harms way, and millions of people across a wide swath of geography are barely scratching out an existence in the midst of carnage, death and oppression. Not caring is not an option because lives matter.

Bacevich, a retired Army officer and professor of history at Boston University, argues that American policy concerning the Middle East is being shaped by a set of widely accepted and largely unchallenged assumptions. They include: Cultural pluralism is a good thing for everyone everywhere, and given the chance, all people will happily coexist with neighbors who champion very different convictions, values and lifestyles. Military force is “an effective handmaiden to diplomacy” so that the “proper role of armed force was not to supplant diplomacy but to make it work” (p. 173, 174). America, with its liberal secular social values and democratic institutions is the standard that all people everywhere are eager to adopt and embrace. The religious beliefs, cultural traditions, historical grievances, and tribal or ethnic loyalties of people are insignificant in the quest to be free from oppressive regimes and the chance to enjoy democratic nationhood. The countries of the Greater Middle East, formed by Western powers at the end of World War II are now filled with citizens whose primary identity is as citizens of those nation-states. Israel’s security is enhanced by the presence of the American military in Arab Muslim lands. And in wars that drag on interminably and try the patience of American voters, drones and special ops units are “the clear weapons of choice” (p. 325).

One of the “central ironies” of America’s military involvement in the Middle East, Bacevich says, is “the unwitting tendency, while intently focusing on solving one problem, to exacerbate a second and plant the seeds of a third” (p. 52). What is depressing in this story is not merely the destruction and misery that has been inflicted but that no one seems willing to step back and seriously ask whether the assumptions and principles that are guiding American foreign policy are in fact good ones.

Those of us who are committed to praying for and encouraging America to act in ways that promote justice and peace would be wise to use America’s War as a primer to get us thinking with greater clarity.