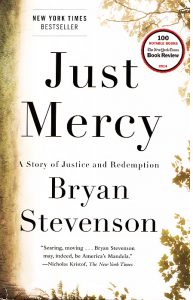 A story of justice and redemption

The title I’ve chosen for this review is the subtitle of the book, Just Mercy I am eagerly recommending to you. After growing up in a small town in Delaware, Bryan Stevenson attended Eastern College in Pennsylvania where he directed the gospel choir on campus. He graduated in 1981, winning a full scholarship to Harvard Law School and while there also earned a Masters degree in public policy. While still a law student Stevenson worked for a time with the Southern Center for Human Rights and was rocked by the experience. In 1989 he founded the Equal Justice Initiative (EJI) in Montgomery, Alabama.

The online Encyclopedia of Alabama explains EJI this way:

The Equal Justice Initiative (EJI) is a nonprofit advocacy and legal-aid organization based in Montgomery, Montgomery County, that aims to further social justice, expand human rights, and reform elements of the criminal justice system in the United States. EJI provides legal representation on behalf of condemned prisoners, juvenile offenders, people who might have been wrongly convicted or charged, poor people denied effective representation, and others who may have been denied a fair trial because of discrimination and injustice.

Just Mercy is the story of Bryan Stevenson and EJI. Actually, that is not totally true. The book does tell this story, a story very worth reading, but more importantly it tells the stories of those who have been banished to the dark underbelly of American justice and of a courageous man who has been called to begin to make a difference. Just Mercy takes us into death row where we meet prisoners convicted for crimes they did not commit but who before EJI had no one to take up their cause.

At a time when American society is so highly politicized that books about judicial reform are automatically assumed to be motivated by some political agenda, right or left, Just Mercy is like a cup of cold water on a hot day. Bryan Stevenson is shaped by the deep faith nurtured in the African Methodist Episcopal Church in which he was raised, by a deep conviction that every person has dignity and that justice should not destroy the poor and powerless because they are poor and powerless. This is a man who believes in the American system of justice deeply enough to work to reform it, calling it back to the best principles of justice and judicial fairness on which it was founded and which it claims to uphold.

It is possible to err in how we view America’s system of justice. On one side we can see it so pessimistically that we see it as only evil, unredeemable, or we can see it so optimistically that we assume very little real reform is necessary. Bryan Stevenson deals one case and one person at a time. He has dedicated his life to fulfill the biblical imperative Jesus spoke of when he claimed that those “who are blessed by my Father” were faithful (Matthew 25:34).
For I was hungry and you gave me food, I was thirsty and you gave me drink, I was a stranger and you welcomed me, I was naked and you clothed me, I was sick and you visited me, I was in prison and you came to me. Then the righteous will answer him, saying, ‘Lord, when did we see you hungry and feed you, or thirsty and give you drink? And when did we see you a stranger and welcome you, or naked and clothe you? And when did we see you sick or in prison and visit you?’ And the King will answer them, ‘Truly, I say to you, as you did it to one of the least of these my brothers, you did it to me.’ (25:35-40)

Just Mercy is a story of justice and redemption, and it needs to be read by Christians who take their faith seriously. Well written, passionate without ever becoming propagandistic, and rooted in a deep commitment to virtue and justice, it is a story that is too important to miss.