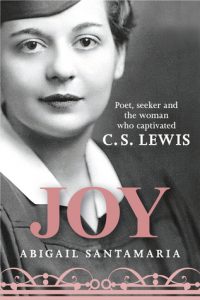 A very determined person
I’ve been trying to think which of C. S. Lewis’s books I read first, but can’t remember. Unlike many who were introduced to him as children with The Chronicles of Narnia, those tales were unavailable in my home. I suspect it was Mere Christianity, probably in my first year in college. It stunned me with its clear, vigorous discussion of Christian belief, and gave me a glimpse of a depth and breadth of the faith I had never imagined possible.

Later I learned Lewis had married when he was older, and wondered what this woman, Joy Davidman was like. I heard Joy, a poet and former Communist, had fled an unhappy marriage in America to live in England, where she met Lewis, was diagnosed with cancer, married Jack (as Lewis was known to his friends), briefly recovered and all too quickly died. A depiction of that narrative is in the film, Shadowlands, in which Anthony Hopkins plays Lewis and Debra Winger plays Joy. The real story, it turns out, is far more interesting.

The April holiday was merely a sweet prelude to an extended “belated honeymoon” to Ireland they began planning for July. Arranging a major event more than a month in advance was risky, but Jack was eager to introduce his bride to his homeland. A nurse still came to help her bathe, but for the most part Joy was self-sufficient. A new hobby—shooting pigeons (or, rather, “shoot[ing] at” pigeons, Jack joked)—had her limping around the woods behind the Kilns that summer, nine-millimeter Webley & Scott shotgun in hand, attempting to augment the supper pot. “Though the pot is not noticeably fuller,” Jack told a friend, “it is wonderful that she should be able to make such a strenuous attempt to fiIl it.” She also wielded the gun to run off “hooligans” who had been trespassing on the grounds for years, carving graffiti into tree bark, robbing the orchard, and generally making a noisy nuisance. When Joy was bedridden, she once looked up to see them peering through the window at her. Jack, enraged, scared them away. She suggested installing a fence. “It’s no use, my love. They’ll only cut the wire,” he said, voice laden with defeat. “Well,” she replied, “if they cut the wire, I’ll buy a shotgun.” Cradling the gun on a walk in the woods with Jack one day she glimpsed one of the young troublemakers carrying a longbow and a quiver full of arrows. Jack sharply informed him that he was trespassing on private property and must leave at once. The intruder mockingly nocked an arrow. Jack stepped protectively in front of Joy, who, having raised her shotgun, called out in frustration, “God damn it, Jack, get out of my line of fire!” The neighborhood children believed she would pull the trigger. When the Walsh family visited with their daughters, a boy ran up to the girls in the woods, warning that they’d better leave “or Mrs. Lewis will shoot you.” [p. 328]

The story told by Abigail Santamaria in Joy, a new biography of Joy Davidman is fascinating, carefully researched and well written. It’s worth reading both because it’s a great story and because it is a poignant reminder that God’s grace is at work in ways that stagger the imagination. Just when I think I have God figured out something like Joy lets me know I haven’t got much of a clue.

If you appreciate the writing of C. S. Lewis you need to read this book because it will help you see him more accurately. Much of the myth that is built up around his memory turns out to be false. And if you know someone about whom you despair they will ever be touched by the gospel you need to read Joy as well. The story of Joy’s conversion is deeply compelling. And if you find some friend’s choices about love and marriage questionable, you have another reason to read it.

Joy: Poet, Seeker, and the Woman Who Captivated C. S. Lewis is a story of love, passion and two people determined to find and live the truth. I recommend it to you warmly.