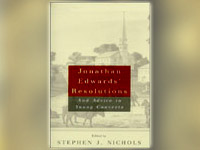 Jonathan Edwards (1703-1758) was a pastor, and perhaps the greatest American theologian who has yet lived. Though his prose may seem formal today, his mind and imagination were so formed by God’s word that his words bear a careful reading. When he was twenty, he composed 70 resolutions which he used to help chart out the trajectory of his life before God. Later, during the Great Awakening, he wrote a letter to Deborah Hatheway, a young believer who asked his help in understanding the Christian life. Now both texts have been published in booklet form, and we recommend it to you. And to increase your interest:

“8. Resolved, to act, in all respects, both speaking and doing, as if nobody had been so vile as I, and as if I had committed the same sins, or had the same infirmities or failings as others…

“22. Resolved, to endeavor to obtain for myself as much happiness in the other world as I possibly can, with all the power, might, vigor, and vehemence, yea violence, I am capable of, or can bring myself to exert, in any way that can be thought of.”