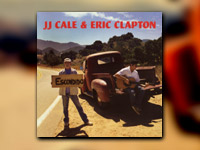 In 1970, after years of proving his prowess on the guitar in groups like the Yardbirds, Cream, and Blind Faith, Eric Clapton released his first solo album. On that record Clapton covered a song by a reclusive musician/songwriter named J. J. Cale. It was that song, “After Midnight,” that rocketed Clapton onto the charts.

The lyrics may not seem like much, but coupled with Clapton’s superb playing, the simple arrangement was destined to become a classic. It’s about that magic moment that can only be experienced at a live performance with close friends, preferably in an intimate club, when the music takes on a life of its own. It may be after midnight but no one cares, because this is what music and frienship is all about, when reality is re-enchanted, and we know and believe once again that life is deeper and richer than we could ever imagine.

J. J. Cale hails from Oklahoma, and has never sought the spotlight, preferring to hone his guitar skills by playing in small venues, writing songs covered by musicians as varied as Johnny Cash, Deep Purple, and Santana (to name just a few). In 2000, Mojo Magazine asked Clapton if there was any other musician he would like to be. “I don’t model myself on him,” Clapton responded, “but I like J. J. Cale, his philosophy, writing skills, musicianship. He’s a fine, superior musician, one of the masters of the last three decades of music.”

In 2006 Cale and Clapton collaborated on an album, The Road to Escondido. It has not made a splash on the charts, but is music produced by two musicians who respect one another, share maturity as artists, and who care deeply about the integrity of their music. Eleven of the 14 songs on Escondido are Cale’s compositions, Clapton wrote two (one with John Mayer), and one is a classic, a cover of Brownie McGhee’s “Sporting Life Blues.”

Each song is like a deceptively simple snapshot of life, captured by someone who has been around and so is no longer easily fooled. The observations are simple, but in them we sense the grit of reality.

Ain’t no sense in the action, killing people all the time
Ain’t no sense no the action, killing people all the time
When it happen on the street we call that a crime
These old boys are leading us somewhere—that is plain to see
I don’t know much of nothing, still it troubles me
Got to find another way, this one ain’t the way to go
Got to get a plan, change our ways or no…

Some albums I appreciate enough to listen to repeatedly but never find them satisfying in any personal sense. The Road to Escondido is endlessly satisfying to me, like the feel I have returning home after a disappointing, hectic day to a glass of wine and a quiet meal with the woman who loves me.

The opening song, “Danger,” reminds me of the ancient Hebrew sage who personified Wisdom and Folly so we could grasp their reality with imagination instead of conceiving of them only as abstract intellectual concepts. In this case it is Danger we meet, in all her seductiveness, made more attractive at a time when so many of the postmodern generation are dying from boredom, lost in a cosmos that seems to hold out little meaning or direction.

Danger she walks the streets alone
Danger all the bars she has to know
All the men that look her way could be hers, hers today
Danger is out into the night

Locked into a love affair didn’t seem to go nowhere
With no choice she thought she might
Caution to the wind, right into the night

Danger she walks the streets alone
Danger all the bars she and I know
All the men that look her way could be hers today
(“Danger” by J. J. Cale)

In a broken world, somehow the fear of death, the sense there is no significance beyond the whims of a cynical world, makes playing with danger all the more attractive. Which is why warnings without a recovery of hope, are never enough. If there is no reason to wake up in the morning, playing at the edge of the abyss can be the only way we feel truly alive. It’s the reason the film Fight Club has achieved cult status.

Both Cale and Clapton are understated on this album, as if both are making way for the other, each honestly wanting the other to shine. It’s more than a duet, more than a collaboration; The Road to Escondido is kindred spirits sharing the profound joy of a hard-won artistry and an easy friendship.

In Spanish, “escondido” means “hidden.” In this case I’d guess it refers to the mysterious yet inevitable final reality that awaits us as we walk down the path that shapes the story of our lives. The present moment is vital, of course, but maturity reveals that the present moment must be lived in light of the final reality or it is not lived at all. Which is why The Road to Escondido is an album that could not have been made earlier in their careers. It requires maturity to produce music like this. Maturity to face both the beauty of creativity and the darkness of our brokenness while refusing both despair and sentimentality. To hold out hope that someone might know how to walk into the mystery that is hidden at the end.

The Road to Escondido, one critic says, “is the sound of two friends getting together to sing a few songs for fun. It just happens they are both highly skilled musicians with 40 years of making music behind them.” It isn’t cutting edge or edgy as albums go, but every time I put it on I think of being with my own best friend, relaxed and at peace, which is its own special grace.