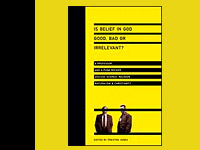 In 2006 Preston Jones, a contributing editor to Critique, published a book with Greg Graffin called Is Belief in God Good, Bad or Irrelevant? (IVP). Graffin is the front man, songwriter, and vocalist for the punk band Bad Religion, and an evolutionary biologist (Ph.D., Cornell). Graffin engages Jones, a historian (Ph.D., University of Ottowa) who is a committed Christian, thoughtfully on a wide range of issues including morality, the existence of God, music, and the meaning of life. I asked Jones to ask Graffin to name the three books he would encourage every Christian to read and discuss with care. These are the books Graffin recommends, and I gladly pass his recommendation on to you. All three are accessible and written by scholars who not only believe in evolution in terms of science, but as the only reasonable basis on which to understand all of life. Darwin: A Very Short Introduction by Jonathan Howard (Oxford); What Evolution Is by Ernst Mayr (Basic); and A Devil’s Chaplain: Reflections on Hope, Lies, Science, and Love by Richard Dawkins (Houghton Mifflin).