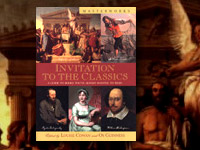 Would you agree with this?
A discerning Christian is a thinking Christian, and a thinking Christian reads. Not just occasionally, but regularly; not just by whim, but with a reading plan designed to nurture maturity and faithfulness; and with a voraciousness that comes from knowing that the Lord we serve is the living Word whose public ministry involved telling stories.

This is not to suggest, of course, that believers who happen to be illiterate cannot have a Christian mind. Rather, it is to argue that those who are too busy to read are simply too busy. “Those of us who have been true readers all our life,” C. S. Lewis notes, “seldom fully realize the enormous extension of our being which we owe to authors. We realize it best when we talk with an unliterary friend. He may be full of goodness and good sense but he inhabits a tiny world.”

Ellis Potter, former L’Abri Worker and now pastor in Switzerland, gets at the same idea by proposing we ask 10 people this question: “If you became a Christian today, do you think your life would become larger, fuller, richer, more attractive and creative, more involved with the people and circumstances around you? Or do you think your life would be smaller, narrower, more withdrawn, less winsome, less involved with the people and culture around you?” What do we think their answer would be? Where did they get this idea? Why did we teach it to them? And if they got to know us well, would they change their mind?

Invitation to the Classics won’t solve the functional illiteracy rampant among Christians, unfortunately, but it is a wonderful resource to help us escape our “tiny world.” In its pages 70 Christian scholars introduce us to 75 classic works of literature, from The Iliad by Homer to One Day in the Life of Ivan Denisovich by Aleksandr Solzhenitsyn. The introduction to each classic is necessarily brief, but clearly outlines the historical background of the work and author, and helps us approach it with understanding by examining the work from the perspective of the Christian world and life view. Opening essays on “The Importance of the Classics” and “The ‘Classics’ Are Not The ‘Canon’,” along with 13 brief sections on such topics as “Medieval Christian Writers,” “Spanish Classics,” “Devotional Classics,” and “Contemporary Writers” make the book even more comprehensive. Invitation to the Classics is attractive and accessible, complete with illustrations (185 in all throughout the book, many in color), quotations, suggestions for further study, and issues worth exploring.

There is much richness here: Os Guinness (author and senior fellow of the Trinity Forum) introduces us to Blaise Pascal’s Pensées. Mark Noll (professor of history at Wheaton College) introduces the Institutes of the Christian Religion by John Calvin and Jonathan Edward’s A Treatise Concerning Religious Affections. Roger Lundin (professor of English at Wheaton) covers Twilight of the Idols by Friedrich Nietzsche, The Scarlet Letter by Nathaniel Hawthorne, and The Complete Poems of Emily Dickinson. Alan Jacobs (professor of English at Wheaton and frequent Mars Hill Tape commentator) introduces John Dunne’s poetry. Mary Mumbach (dean of Thomas More College) covers three short stories by Flannery O’Connor. And then there’s Sophocles’ Oedipus Rex , Plato’s Republic, Beowulf, Jane Austin’s Pride and Prejudice, Dostoyevsky’s The Brothers Karamazov, and C. S. Lewis’s The Screwtape Letters—all these and so much more.

We recommend Invitation to the Classics to you. “In an age of intellectual and cultural starvation,” poet Luci Shaw says, “whether deliberate or unwitting, an invitation to a literary banquet as richly nourishing as Invitation to the Classics is doubly welcome, both as a stimulus to the Christian imagination and as a reminder that there are remedies for our moral and spiritual hungers.” Invitation to the Classics belongs in every church library and should be found in each Christian’s living room. Use it to develop a comprehensive reading plan. Put a copy on the bedside stand in your guest room. Give it as a gift to an “unliterary friend.” Use it as resource to build a library. Make use of it in forming and leading a book-discussion group. Compare and contrast what these scholars write with Clifton Fadiman’s The Lifetime Reading Plan, an excellent introduction to more than 100 classics which is written from a non-Christian perspective. And allow Invitation to the Classics’ brief essays and accompanying questions to help you read Christianly, so that, in Francis Schaeffer’s words, your imagination will increasingly fly beyond the stars.

Invitation to the Classics: A Guide to Books You’ve Always Wanted to Read (Louise Cowan and Os Guinness, 1998)