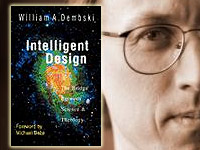 The idea of intelligent design has been around for a very long time, but being able to identify design reliably has been a problem. After all, if I point to something that appears in nature and claim it is so complex that it must have been designed, someone can counter that claim by arguing it merely appears designed because science isn’t sophisticated enough yet to unravel its complexity. That doesn’t necessarily end the discussion, but it has made the concept a difficult one in scientific circles.

Until William Dembski, that is. As Michael Behe explains in the Foreword to Intelligent Design:

Dembski’s insight, first elaborated in his scholarly monograph The Design Inference and explained here for a broader readership, is that we recognize design in what he calls ‘specified complexity’ or equivalently ‘specified small probability.’ In other words, we apprehend design in highly improbable (complex) events that also fit some independently identifiable pattern (specification). For example, if we turned the corner and saw a couple of Scrabble letters on a table that spelled AN, we would not, just on that basis, be able to decide if they were purposely arranged. Even though they spelled a word, the probability of getting a short word by chance is not prohibitive. On the other hand, the probability of seeing some particular long sequence of Scrabble letters, such as NDEIRUABFDMMOJHRIINKE, is quite small (around one in a billion billion billion). Nonetheless, if we saw that sequence lined up on a table, we would think little of it because it is not specified—it matches no recognizable pattern. But if we saw a sequence of letters that read, say, METHINKSITISLIKEAWEASEL, we would easily conclude that the letters were intelligently arranged that way. The sequence of letters is not only highly improbable, but it also matches an intelligible English sentence. It is a product of intelligent design.

In other words, Dembski has provided the mathematical and philosophical tools required to identify design in naturally occurring systems. His argument is that specified complexity is a reliable criterion for detecting design. Thus, by using design theory in empirical study of natural phenomena, scientists are able to discern both a complexity and a specificity that suggests intelligent design in the universe rather than merely random, undirected processes.

Warning: though the concept seems simple enough—those Scrabble tiles aren’t too hard to understand—the actual details of Dembski’s argument are more than a little challenging. Still, if you’d like some serious reading on the topic, we recommend Intelligent Design to you.

Dembski has also edited an excellent collection of essays on intelligent design, called Signs of Intelligence, which is written specifically for lay people.

Intelligent Design: The Bridge Between Science and Theology (William Dembski, 1999)