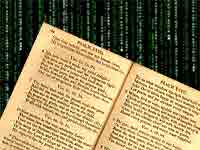 How is The Matrix similar to the 23rd Psalm?
I do not mean to suggest that Neo, the messianic character in the film is similar to the shepherd of David’s poem, nor that the sheep of the psalm are similar to Zion’s huddling masses. I don’t find either comparison very plausible or helpful. There is one way, however, in which Psalm 23 and The Matrix are so similar that understanding them correctly requires us to approach them identically. The similarity is not in their ideas but in their form as art. The psalm is a poem and the film is visual art, which means that both rely primarily on images and metaphors to communicate. Both communicate ideas, but not through tightly-woven arguments in which a series of premises and conclusions are presented in a carefully-constructed logical progression. Instead, David, Andy, and Larry Wachowski choose to communicate their ideas through images and metaphors which we are meant to inhabit and experience.

We’ve occasionally mentioned in these pages how Bible study skills and discernment skills tend to parallel one another, and this is a case in point. To state the obvious: Poetry is not the same as prose. We need to keep that in mind when we study the poetic sections of Scripture. And film, because it is a visual medium, is not the same as a philosophy lecture or a prose novel (even if it is based on the novel), and needs to be approached differently. Poetry and film share something in common: the use of metaphor and image as a primary means of creative expression.

For example, consider the well-known line from Ecclesiastes 1:2:
Vanity of vanities, says the Preacher, vanities of vanities! All is vanity.

Some translations substitute “meaningless” for “vanity,” and others use “futility.” The original Hebrew, however, is quite different: “Vapor of vapors.” This is the language of poetry, an image which includes the notions of vanity, meaningless, and futility, but which also includes a great deal more. It is richer than the terms chosen by the translators, more nuanced and profound. “The poet expects us to let that image sink in,” Leland Ryken says. “He wants us to recall our own experiences of vapor or mist. Then we transfer the meaning over to the subject of life, and when we do, the meanings are multiple. Vapor is transient and fleeting; it is insubstantial; it is elusive. All those meanings are important to the book of Ecclesiastes.” Vapor is a term which requires us to meditate on the text, to live in it, so to speak, in order to make sense of it.

It can be tempting to reduce a psalm or other piece of biblical poetry to an idea or set of ideas, perhaps outlined as a series of propositions. Many of us tend to be more comfortable with prose than we are with poetry, partly because poetry takes time, which is something we have little of in our busy lives. Treating poetry as if it were a prose argument, however, keeps us from entering into its full range of meaning.

Similarly, thoughtful films can not be reduced to an idea or even a set of ideas as if they were a journal article arguing for a particular position. Well-crafted films contain multiple layers and touch on themes in images that may only be hinted at in the dialogue. Reducing a movie to a “message” while failing to appreciate and receive the images which a film invites us to inhabit means that we will miss entering its world fully. In the movie, 13 Conversations About One Thing, for example, the use of glass and windows is a repeated image throughout the film. Together with the lighting that is used, this image provides an added, crucial dimension to the questions raised by the characters whose lives we share in the unfolding story.

“Poetry is a special use of language,” Ryken observes. “The first principle of poetry is the primacy of the image. An image is any word that names a concrete object or action. Poets speak in images and speak a language of images… Poets speak a language of images because they want readers to experience the content of their utterance as image and concretion , not simply as an idea. The meaning that literature conveys is affective, imaginative, and experiential as well as ideational. Literary critic Cleanth Brooks rightly claimed that a poem transacts its business of discourse ‘by being an experience rather than any mere statement about experience or any mere abstraction from experience.’” These images and metaphors in poetry—and in a visual form, in cinema—are powerful because they make us think, and the fact that they may not be immediately comprehended in a few simple words is part of their beauty and their effectiveness.

Christians are often uncomfortable with ambiguity, wanting truth that is clean, clear, and undisputed. Because we are concerned about objective truth rather than subjective impressions, we don’t like Bible studies where every member of the group takes something different away from the text. And there is something to be said for this desire, to the extent that we mean that the meaning of a text of Scripture (or that of a film, for that matter) isn’t entirely up for grabs as if every interpretation were equally valid. Obviously, every interpretation isn’t equally valid. On the other hand, we mustn’t allow this to keep us from appreciating and embracing the richly layered nature of image and metaphor in both poetry and the visual arts. Because every interpretation is not equally valid does not imply that the correct interpretation does not include a rich multiplicity of meanings.

It might surprise Christians to discover that, taken as whole, “the Bible is much more a book of images and motifs than of abstractions and propositions.” As James Fischer notes, the Scriptures speak “largely in images… The stories, the parables, the sermons of the prophets, the reflections of the wise men, the pictures of the age to come, and interpretation of past events all tend to be expressed in images which arise out of experience. They do not often arise out of abstract technical language.”

Developing skill in identifying, meditating on, and living in images and metaphor, then, is a skill that will deepen both our discipleship as students of Scripture and our discernment as those who can engage film creatively with the gospel. Two books that can help us grow are the Dictionary of Biblical Imagery and Understanding Movies. We recommend them both, and encourage discussion groups to intentionally set out to develop these skills together as the people of God in community.