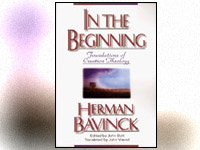 Knowing that God created the world around us, and ourselves as part of it,” Dr. Packer writes, “is basic to true religion.” The doctrine of Creation is not merely something to use in a debate with evolutionists, but is foundational to all that we think and do, because all that we believe as Christians is rooted in the Creation. Sadly, many Christians have failed to comprehend the full riches of this doctrine because of either an inappropriate emphasis on issues such as the age of the earth, or simply a lack of teaching on the topic. Many of the weaknesses of modern Christianity, in fact, can be traced to this lack. Herman Bavinck (1854-1921) was a Dutch theologian who unpacked the doctrine of Creation in Reformed Dogmatics. In the Beginning is the section of that four volume work dealing with Creation. This is serious theology for serious Christians, and we recommend it to you.

In the Beginning: Foundations of Creation Theology (Herman Bavinck, 1999)