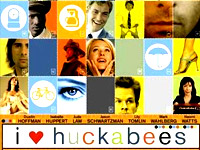 In case you were wondering, the title of this movie is pronounced, “I [HEART] Huckabees.” If that raises the question, “What does that mean?” in your mind, you’ll just have to see the film. I should warn you, however, that while that question gets answered, the film stirs up such a flurry of other questions—all about meaning, as it turns out—that by the end you’ll be wondering what hit you. And it’s just about the only question the movie actually answers.

Which, I think, is the point of the film: to raise some of the very biggest questions about meaning and significance, and make us laugh in the process. Or, as some of the advertisements for the film put it, “I [HEART] Huckabees is all about what it’s all about.”

The plot is relatively simple. Albert, the poetry reciting head of a small environmental group trying to save a marsh from being developed, is troubled by a series of coincidences in his life. So he hires the Existential Detectives, played by Lily Thomlin and Dustin Hoffman, to do their thing, which is to follow him around, watch everything he does, and help him sort out the meaning of existence. In the meantime, Albert has signed a contract with Huckabees, a huge superstore, for the resources to save the marsh, only to have the corporation’s PR head, played by Jude Law, cynically manipulate Albert’s Open Spaces Coalition to his own greedy materialistic ends. Jude Law’s girlfriend, the air head model for Huckabees played by Naomi Watts, falls under the Existential Detectives’ spell to discover that her real self involves dressing like a farm girl rather than appearing in sexy outfits in Huckabees’ commercials. Albert is linked up with Tommy, played wonderfully by Mark Wahlberg, who joins him in the search for meaning. Then a French philosophical opponent of the Existential Detectives, played by Isabelle Huppert, appears and seduces Albert to her view of things. Her motto, neatly printed up on business cards is “cruelty, manipulation, meaninglessness.” All this transpires at a manic pace, until in the end, well, so that I don’t reveal too much, it’s best to say simply that the film ends.

There have been other recent films that have been as explicitly philosophical as I [HEART] Huckabees, but I can’t think of any that were this entertaining. Waking Life (2001) comes to mind, for example, but it was so dry it was difficult to sit through. I Huckabees is like a roller coaster for the mind, a wild ride through world views to see if anything can make sense of the deep sadness, values, relationships, coincidences, bitter fragmentation, and joys of life in our pluralistic, hectic world. This is the postmodern generation’s approach to philosophy.

“I’m interested in philosophy insofar as it’s practical and it makes you feel more alive,” director David Russell says. “And it makes you more open-minded. That’s really the only way it interests me. So, Huckabees is talking about all of these spiritual ideas and putting them in a context without a church. I think they can absolutely live without a church. The ideas are ‘departure points’… Jesus would say this is true: If your spirituality is about your ego then your spirituality is fake. Our ego likes to control things, to have certainty. Certainty is very useful. If it wasn’t, we’d be sitting in our own excrement. But, that certainty can really close your mind off to the true light of Jesus and to the truth about what is. This film is about ‘departure points,’ departures from certainty and the ego.” Later in the same interview about I [HEART] Huckabees, Russell reads a quote from the poet W. H. Auden which featured in his thinking as he directed the film: “We would rather be ruined than changed. We would rather die in our dread than climb the cross of the moment and let our illusions die.”

The movie blends comedy with philosophical discussion with tragedy, moving between them so quickly that we are constantly kept off balance. The search for meaning is authentic, yet is often met with propositions that are absurd. “Say this blanket represents all the matter and energy in the universe, okay?” Hoffman says to Albert early in the film, poking his fingers into the blanket to produce lumps. “This is me, this is you, And over here, this is the Eiffel Tower, right, it’s Paris!” And then Hoffman zips Albert into a body bag so he can have some private time to sort that out.

In the end, I [HEART] Huckabees is about getting people to stop and reflect for a moment. To be willing to look hard at their assumptions, their prejudices, their convictions and values, their certainties, questions, and doubts, and to consider them all carefully in the light of reality as we actually live it. Not to think about big ideas in a comfortable room over coffee and muffins, but in the fast-paced give and take of life that we experience everyday. The movie does not provide final answers—and many that are proposed are shown to be absurd—but that isn’t its point. It’s meant to stir things up, not provide closure, to make us wonder, not to provide certainty. And rather than do all this with the solemnity which usually accompanies world view explorations, it does it all in a manic comedy, where the deep pain and delicious irony of life in a fallen world is seen as the backdrop for all our yearnings for meaning and significance in a world that so often seems to be teetering out of control.

I will be very interested to learn how the young adults in my life respond to this film, and how they pose the questions—and answer the questions—raised by the movie. And I look forward to leading some of the discussions, to see where the conversation takes us. The Story of Scripture provides gracious answers to these questions, but they’ll need to be framed in a way that will make sense to a generation who can laugh and wonder at I [HEART] Huckabees.

1. Why did you see this film? Are you glad you did? Why or why not? 2. To what extent do you think the director wants us to leave the film wondering about what it’s all about? 3. As objectively as you can list them, which basic questions did the film pose? 4. Though G. K. Chesterton blended philosophical musing with wit, it is not often that world view issues are explored in comedic form. How effective is I [HEART] Huckabees as a comedy? What might Christians learn from this for their attempts to gain a hearing for the gospel by the postmodern generation? Could this be one reason why Chesterton is still popular today as a Christian apologist? 5. What’s attractive here? How is it made attractive? 6. Which character did you identify with most? Why? What is the significance of each character to the story of the film? 7. Which scene struck you as most funny? Most absurd? Most poignant? Most truthful? Most attractive? Why? 8. The Christian family in the film is depicted as, in director Russell’s words, “big hearted” but “closed minded.” Why might he have depicted them this way? 9. If you were to discuss this film with a group of non-Christians, how might you be able to talk about the gospel in a way that would make sense? Why might the “standard” presentations of “the gospel” fail to communicate adequately? 10. David Russell’s previous film which he directed was Three Kings. What similarities do you see between the films? 11. In what ways were the techniques of film-making (casting, direction, lighting, script, music, sets, action, cinematography, editing, etc.) used to get the film’s message(s) across, or to make the message plausible or compelling? In what ways were they ineffective or misused?