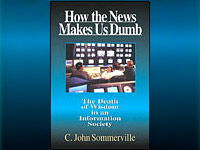 In 1991, an article was published in First Things that so impressed me I sent copies to a number of my friends. I also called attention to it in Critique #8 – 1991. The title of the article was the same as this book, and is a concise summary of its argument.

Dr. Sommerville’s thesis is actually rather simple: the problem with the news is not the bias of journalists, but the fact that it is daily. Each day, because they need to sell their product, newspaper editors and TV news anchors find ways to make their stories seem important, though they rarely are, only to repeat the process the next day. Some tiny fragment of reality is made to be the center of our attention, just for a few hours—a fragment which is chosen for its ability to grab our attention instead of for its actual significance. What is more, the daily nature of the news requires that the fragment be covered without much regard to deeper issues, and is presented as crucial even though a multitude of other things might have occurred in a multitude of other places that will be seen, from the perspective of time, as truly history-making. Increasingly, these fragments doled out by the news industry help to mold our consciousness of life and reality, when it is the great books and ideas of history which should forming our view of the world. And thus, the news, which we all eagerly devour each day, actually tends to make us dumb.

“For two weeks after Princess Diana died in that sad accident in 1997,” Sommerville points out:
one might have assumed that nothing else was happening in the world. We didn’t hear about it if it did, since only a few events get to be news… Historians may eventually tell us that the world turned a corner at just that time. Maybe in some embassy or boardroom or laboratory or monk’s cell some lever was pulled that set history on a new course. But it will never be news if it missed that first opportunity.

Really important information still circulates by word of mouth, not in the news media… The product of the news business is change, not wisdom. You need to go elsewhere for wisdom. Wisdom has to do with seeing things in their largest context, whereas news is structured in a way that destroys the larger context. You have to do certain things to information if you want to sell it on a daily basis. You have to make each day’s report seem important. And you do that by reducing the importance of its context.

If you are doubtful about this argument, Sommerville proposes a number of very practical tests.

Test #1. Imagine inserting coins into a vending machine, only to receive yesterday’s paper, instead of today’s. Now, why are you so disappointed? If it was so worthwhile reading yesterday, why isn’t the same news important to read—or even to reread—today?

Test #2. Consider how many newspaper stories, out of a lifetime of reading, you would choose to clip and save for your grandchildren. If so little of what appears in the daily paper rises to that level of importance, why bother reading it every day?

Test #3. Imagine opening the newspaper to find one word printed in the middle of the page. A word such as VIRTUE or CHARACTER or SLOTH. Since you normally set aside fifteen minutes, say, each day to read the newspaper, what if they simply provided such a word—or better yet, even a passage of Scripture, or a chapter from a great book—on which you could quietly and deeply reflect for a quarter of an hour? What would be of greater value, all things considered?

As if to underscore Dr. Sommerville’s argument, a physician wrote a piece that appeared on the Op-Ed page of the newspaper we receive each day: “CAUTION: News Bad for Health.” “The media’s tendency to turn the most marginal scientific findings into front-page news,” cardiologist Dr. Brant Mittler writes, “can be harmful, even fatal.”

All this brings to mind the fact that C. S. Lewis—surely one of the most informed Christian thinkers of his age—rarely if ever read newspapers, and urged a “mouthwash” of great literature each time you did read one. Dr. Sommerville’s argument is worth attending to, both by Christians who produce the news, and by those who consume it. After all, this part of life, too, must be lived as unto the Lord.

“My recommendation,” Dr. Sommerville concludes, “is that news be put in its place, perhaps on a monthly schedule but in more substantial amounts, and that it be read after we’ve read more substantial fare, if there’s time.”

We especially recommend Dr. Sommerville’s article, but if you would like to watch him unpack his argument in greater detail, read How the News Makes Us Dumb. Then figure out how you can use that fifteen minutes you’ve saved each day to grow in wisdom.

How the News Makes Us Dumb: The Death of Wisdom in an Information Society (C. John Sommerville, 1999)