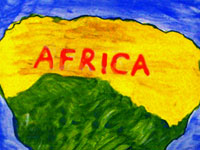 Out of Dark Africa…Light
Africa was long known in the West as the “Dark Continent.” The explorer Henry Stanley (of “Dr. Livingstone I presume” fame) may have coined the expression for the title of his 1878 book, an account of his travels. Europeans found the vast landmass largely impenetrable and mysterious until the colonial period in the 19th century. Even today, influenced by incessant media reports of violent tribal rivalries, government corruption, disease, entrenched poverty, and vast populations of refugees, it’s easy to see it as a dark place.

But that’s only part of the story of Africa. To give some hint of the rest of the story, here are two facts worth noting, the first from our own day and one from the days of the early church.

“The Christian figures,” Dr. Sanneh concludes with keen understatement, “represent a continental shift of historic proportions.” This rapidly growing African church is assuming increased importance at the beginning of the 21st century for Christian scholarship, church leadership, and global influence. And as astonishing as this might seem to Westerners, it turns out this is not the first time Africa assumed such a position of significance for the church.

Until his recent retirement Thomas Oden taught at Drew University. He is a scholar who devoted his life to what is known as the Patristic period of church history—the word is from the Latin for “father.” It refers to the earliest teachers of the church, who were active as apologists, commentators, theologians, and preachers in the centuries immediately after Christ.

Now, in How Africa Shaped the Christian Mind, Oden identifies seven ways African thinkers and institutions were the actual genesis of what has been known ever since as Western civilization. As Oden’s book title tells us—and this is Fact #2: Africa shaped the Christian mind of the Western church in the very earliest centuries after Christ by being the seedbed of western Christianity. More specifically, in his book Oden details…

…how the birth of the European university was anticipated within African Christianity;

…how Christian historical and spiritual exegesis of Scripture first matured in Africa;

…how African thinkers shaped the very core of the most basic early Christian dogma;

…how Neoplatonic philosophy of late antiquity moved from Africa to Europe; and

…how influential literary and dialectical skills were refined in Africa.

I found this brief book both interesting and important. I’m not certain everyone needs to read it. I am certain, however, that everyone needs to know and process Oden’s argument (I’ll tell you why I think this in a moment). His argument can be summarized this way in three simple assertions. First, Western Christianity was shaped in very significant ways by African thinkers and culture in the earliest days of the church. Second, this rich historical heritage has languished unexplored and unstudied for 2000 years. And third, as Christianity flourishes now in Africa a generation of young African Christian scholars, historians and theologians, should take up this needed task and fill in this gap in our historical understanding of the development of the church.

I think this is important for Western Christians to process. First, as Oden explains, it turns longstanding historical assumptions on their head, rewrites the early history of Christian thought and practice, and challenges some commonly held unspoken perceptions of Africa. “It is incorrect to portray Africa to the world,” Oden says, “as if Africa has always been a bit lacking in intellectual toughness and slow to awaken to Western achievement. The irony is that Western achievements themselves have often been profoundly indebted to Africa before they became accepted in Europe.”

Second, we need to celebrate the impact this story can have on the African church as it rediscovers the richness of its own heritage. Thomas Oden again:

It is a story of heroic proportions, replete with intrepid characters and surprise endings. It is not a myth, but a real history, laden with mystery, full to overflowing with unanticipated providences, heavy with sacrifice and miracle, with unrepeatable choices to be confronted, and much to be learned. It has the capacity to once again illumine personal struggles everywhere.

Global Christian believers are intrigued by modern Africa but most have not thought of it in the light of its history. Least of all have Africans had the opportunity to hear their own full story told.

Christianity is not a modern Western import into Africa. Instead, the Western church owes a debt of gratitude to the African church. She shaped the faith as it spread out of Jerusalem towards the far reaches of the globe after Pentecost. Contrary to popular myth, Christianity is not merely the latest product of former colonial powers eager to bring something foreign into Africa.

And third, we need to hear this story because we need to be reoriented to our changing world. The West once was the center the Christian world, but it is the center no longer. One measure of the spiritual vitality of the Western church will be found in our eagerness to listen to and learn from the mature Christian voices increasingly heard in Africa. We were happy to send missionaries, but will be as happy to receive teachers from Africa? Especially if, though grateful for the missionaries we sent, they are less impressed by how we live out our faith in a pluralistic world? Organizations like the Langham Trust (known in the US as John Stott Ministries) have for many years invested in the development of African Christian scholars. The Trust provides a healthy model for how the West might use its resources to minister to the African church where needs have changed since the beginning of the modern Western missionary movement in the 19th century.

It is a story I look forward to hearing. It will reveal, no doubt, bright evidence of the light of the gospel that for two millennia has stayed hidden in old libraries and dusty manuscripts scattered across the landscape of a continent so many have imagined to be dark.

Sources: Lamin Sanneh’s essay, “The Return of Religion,” appeared in The Cresset: A review of literature, the arts, and public affairs, a publication of Valparaiso University (June 2009) p 15-23]. Oden in How Africa Shaped the Christian Mind, p. 42-43 and an author interview from IVP.

Dr. Oden has been involved in a long-term effort to make the writings of the Patristic teachers more accessible to English speaking readers. One part of this effort has produced a new series of biblical commentaries, The Ancient Christian Commentary on Scripture (InterVarsity Press). In the earliest centuries of the church few commentaries on books of the Bible were written. We do have, however, numerous sermons, letters, and reflections on Scripture that date to that period. The Ancient Christian Commentary editors, led by Oden, have sifted through this enormous collection of documents and drawn together and reflections on the appropriate sections of Scripture. Many appear here in English translation for the first time.

Ancient Christian Devotional: A Year of Weekly Readings (Downers Grove, IL: InterVarsity Press; 2009) 273 pp + notes + indices. Edited by Cindy Crosby with the help of Thomas Oden, this devotional allows Christians to meditate on brief excerpts of teachings taken from Patristic writings. The Ancient Christian Devotional can serve as a good introduction for those with no exposure to these earliest teachers of the faith. And for those who have been using devotionals written more recently, this one will provide a distinct enough change that you will likely find yourself reading more slowly, reflecting more deeply, and wondering more fully.