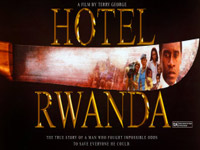 Tension between Hutus and Tutsis can be traced all the way back to the 14 th century. That was when Tutsis migrated into Hutu territory and achieved political dominance over the more numerous Hutus. For the next six centuries the area known today as Rwanda was ruled by a Tutsi mwami (king). In 1890 European colonial powers entered the picture, with first German, and then Belgium rule. In 1959 violence broke out over the selection of a new mwami, displacing 100,000 Tutsis who fled into neighboring countries. Rwanda gained independence from Belgium in 1962, with Hutus (84% of the populace) and Tutsis (15%) living amid intermittent outbreaks of violence resulting in both the loss of lives, and the displacement of thousands. In 1990 the Rwandan Patriotic Front, mainly Tutsi warriors, invaded Rwanda from Uganda, prompting Rwanda to institute political changes, but new violence broke out anyway. In 1993 a new agreement was reached and a small United Nations peacekeeping mission was established. Then in 1994 President Habyarimana of Rwanda, a Hutu, died in a suspicious plane crash, at which the violence exploded into genocide, fanned by radio stations calling on Hutus to kill their Tutsi neighbors.

The numbers are so appalling they are difficult to grasp. Over the course of 100 days, between 800,000 and 1 million women, men, and children were slaughtered—mostly Tutsis and moderate Hutus brutally hacked to death with machetes. Urgent appeals to the world community went unanswered, and the tiny UN force was impotent; the most powerful nations in the world actively resisted allowing the United Nations to take more aggressive action. Eventually the Rwandan Patriotic Front counterattacked, taking control of Rwanda, as more than 2 million Rwandans, mainly Hutus, fled as refugees. Relief agencies estimate that more than 100,000 have since died through disease in the crowded, desperate camps. Something like 300,000 children are now orphaned.

But there is more. During Belgium colonial rule, Christian missionaries flooded into Rwanda. Today, in this most densely populated of all African nations, 94% of the populace claim to be Christians (57% are Roman Catholic, 26% Protestant, & 11% Adventist). The horrific slaughter of 1994 turns out to be Christian against Christian.

In Kigali, the capitol city of Rwanda, there was a precarious oasis in the midst of the slaughter. More than 1,200 Tutsis and moderate Hutus were given sanctuary in the 4-star Hotel des Mille Collines, which usually catered to European travelers (who were evacuated once the violence began). The hotel manager was Paul Rusesabagina, a Hutu whose wife, Tatiana is Tutsi. For three long, horrifying months Paul used his wits to keep them alive, as sounds of the killing echoed outside the hotel wall, and as soldiers came to the hotel demanding access to its helpless inhabitants. Rwanda has long been rife with corruption, and over many years as hotel manager Paul had curried favor with local businessmen and army officers. Now he dug deep into the hotel’s vaults, using bribes and calling in favors to keep the killers at bay. He never intended to be a hero. He simply made a series of choices, moral choices, and in so doing, became a true hero.

Hotel Rwanda tells the story of Paul Rusesabagina, with a superb Don Cheadle in the lead role. From the day he read the script Cheadle wanted to be involved. “It was a story that had to be told,” he says. Director Terry George was careful in how he filmed the horrific violence of the Rwandan genocide. Little of it is actually depicted, because he didn’t want anyone to refuse to see the film on that account. Instead of gore, we join the huddled refugees in the hotel, not seeing the killing that swirls around them, which increases the sense of terror. Hotel Rwanda is a finely crafted film, using 15,000 African extras to recreate the crowded streets and back alleys where so many perished. Two scenes stand out in my memory as particularly effective in this regard. In one scene, one of Paul and Tatiana’s sons disappears at night, to be found later huddled speechless in a hedge. They carry him indoors to discover that though unharmed, he is slippery with blood. We didn’t need to see what he saw to share his horror. The other scene occurs when Paul and an assistant have ventured out of the hotel grounds in a van to find food and supplies. In the dark of early dawn, they drive down an eerily deserted mist-covered road. The van lurches violently as they slowly make their way, until it becomes clear the lurching is caused by more than the usual potholes. They have been driving over bodies, and as the mist begins to clear, the road in both directions is littered with them.

Nick Nolte, as the desperate yet largely helpless head of the UN peacekeepers, plays a frustrated man representing those who could help but who refuse to do so. Paul’s wife, Tatiana is played wonderfully by Sophie Okonedo, who helps us feel not just the fear of those days, but the strength required of a woman who urges her husband to do what is right, even at the risk of their family’s lives. “Paul provides the film’s moral center,” one film reviewer said, “but Tatiana is, in many ways, its heart. Through her, we witness both the horror of seeing one’s family ripped apart and the love that can, against the odds, help keep it intact. Okonedo’s face registers every raw emotion, from terror to steely resolve, helping lend the film its harrowing, almost documentary-like-feeling.”

Early in the film, Jack, a Western reporter played by Joaqun Phoenix, sneaks out of the hotel and in the dangerous streets videotapes glimpses of the horrific killing. Paul is overjoyed when he sees the footage, believing that this will finally bring help from the West. “I think if people see this footage they’ll say ‘Oh, my God, that’s horrible,’” Jack replies. “And then they’ll go on eating their dinners.”

The story told in Hotel Rwanda is shaped to some extent by Philip Gourevitch’s book on Rwanda, We Wish to Inform You that Tomorrow We will be Killed with Our Families. Christians have a number of reasons to be better informed about the often ignored continent of Africa. The African church is growing there at a rate unknown in Western countries. A large number of the Christian martyrs who died for their faith in the last century were Africans. And we have a responsibility before God to work for justice for Africa, on a whole host of issues, including the AIDS epidemic, Third World debt, famine, and civil violence.

Please see Hotel Rwanda. It’s a fine example of cinematic art, and the story it tells is one we must be sure not to forget. It is both profoundly sad and deeply redemptive, the story of one man who opened his arms when the world turned its back.

1. How did you respond to Hotel Rwanda? What emotions did you experience as the film progressed? Do you remember where you were when the Rwandan tragedy unfolded? How did you learn of it? What was your response to the news? 2. In what ways were the techniques of film-making (casting, direction, lighting, script, music, sets, action, cinematography, editing, etc.) used to get the film’s message(s) across, or to make the message plausible or compelling? In what ways were they ineffective or misused? 3. In many countries like Rwanda, “petty corruption” is so much a part of daily life that workers like hotel managers consider bribes for officials simply one more “business expense.” Can Christians engage in such behavior? Why or why not? Can they use bribes and favors as Paul Rusesabagina did to keep refugees alive in desperate days? Some biblical heroes—Samson, for example—were less than noble in life, though he was used of God (Judges 13:5, 24-25) and noted as a person of faith (Hebrews 11:32). How does this effect the Christian understanding of heroism? 4. Discuss Paul Rusesabagina’s heroism. How was it manifested? How does it compare to the “Super-heroism” of films like Superman, Batman, or Spiderman? How does it compare to Christian notions of heroism? 5. One reason that is given for America’s lack of response to the Rwanda genocide is that a year earlier, US forces in Somalia were lured into a trap, a story told in Black Hawk Down. “The Somali debacle of 1992-93 constrained the West’s response to Rwanda’s humanitarian disaster,” Tracy Kuperus of Gordon College writes for the Association for Public Justice, “but there is a another, more telling reason: location, location, location. U.S. foreign policy is directed towards those areas where our security is threatened or our national interests are challenged, and Rwanda is considered non-vital to our national interests.” On what basis should America’s leaders frame U.S. foreign policy priorities? 6. With whom did you identify in the film? Why? With whom were we meant to identify? Discuss each main character in the film and their significance to the story. 7. How might you have reacted in Paul Rusesabagina’s position? Though it is impossible to imagine what such horrors are actually like, how might we prepare ourselves to be the sort of person who can make right choices in such terrifying moments? 8. How does one believe in a good God in a world in which such cruel horrors exist? How would you talk about this to a non-Christian?