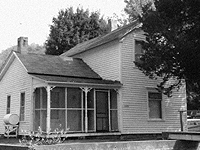 No Place At Home
I never finished reading Marilynne Robinson’s earlier novel, Gilead (2006), though I always intended to get back to it sometime. I started it, got distracted before being drawn into the story and set it aside. Now that I’ve read her latest Home (2008), however, I’m not so certain. I’m not certain I could take the wrenching realism of her stories of people that are, to use Walker Percy’s memorable phrase, lost in the cosmos.

Robinson is a very good writer, a novelist worth noting whose books are worth savoring for the craftsmanship of her prose. She doesn’t just write a good story, but brings us into the ordinary stuff of life so that we feel we’ve been there, are there. She paints a slice of reality that becomes a metaphor for life, telling of ordinary people trying to find their way through the myriad choices, dreams, and disappointments of ordinary life into a place that is safe, a place of forgiveness, acceptance, and ultimately, glory.

Home is a story that is true, which is why it has such power. Power to let us feel anew the deep, essential yearning we have to know a father’s love and acceptance. Power to rock us with the sense of inexpressible loss when that grace is withheld. It’s a tragic loss suffered by so many in this sadly broken world, and the pain of that loss echoes on every page of the book. The roots of the problem lie in the past, deep in the hearts and choices of a fragmented family. Jack may have committed the specific sins that now haunt them, but all the Boughton’s feel the anguish of paternal disappointment, an unsettled conscience, and the lack of healing.

When Jack came in, his father was still at the table, brooding over his cold soup. “Don’t bother,” he said, when Jack offered to help him with his chair. “Glory is here. She will look after me.”
When she came back into the kitchen, Jack was standing in the porch. He said, “It’s nice out here. Dark.”
She went out and stood beside him.
He cleared his throat. “Can I ask you something?”
“Probably.”
“It’s nothing personal.”
“All right.”
“Say you do something terrible. And it’s done. And you can’t change it. Then how do you live the rest of your life? What do you say about it?”
“Do I know what terrible thing we’re talking about?”
He nodded. “Yes. You do know. When I was out walking the other day I took a wrong turn and ended up at the cemetery.” He said, “I’d forgotten she was there.”
“She was part of the family.”
He nodded.
“All I can tell you is what Papa would say. He’d say repent, and then—you can put it aside, more or less, and go on. You’ve probably heard him say that as often as I have.”
“More often.” Then he said, “Regret doesn’t count, I suppose.”
“I don’t claim to know about these things. It seems to me that regret should count. Whatever that means.”
“But if you just found out about it, no matter whether I regretted or repented—what would you think of me?”
“What can I say? You’re my brother. If I were someone else, and I knew you and thought you were all right, then that would matter more to me than something that happened so many years ago.”
“Even though I had never told you about it. And I should have told you.”
“I think so.”
He nodded. “You’re not being kind.”
“I don’t really know.”
“Well, I might have a chance. Things could work out.” He said, “It will be bad at best. A miserable thing to have to hope for. Pain all around. Ah, little sister. It’s no wonder I can’t sleep.”

Home is a creative retelling of Jesus’ parable of the prodigal son (you can find Jesus’ original version in the New Testament, in Luke 15:11-32). Robinson’s retelling, however, turns the parable on its head. In Home the father eagerly awaits the wayward son with talk of grace, but forgiveness and acceptance are never fully granted. This is the parable recast in darkness, the demonic version, so to speak, in which the one who is lost is lost even at home. And there is no greater homesickness possible or more horrible than that.

Jesus’ parable ends with an extravagant feast, a celebration that what was lost is now found, what had been as dead to the father is alive again and at home. In Robinson’s version the ending is a leaving, when what is lost walks away down the street out of sight.

He picked up his suitcase, and then he set it down again and went into the parlor, where his father was sitting in the Morris chair. He stood there, hat in hand. The old man looked at him, stern with the effort of attention, or with wordless anger.
Jack shrugged. “I have to go now. I wanted to say goodbye.” He went to his father and held out his hand.
The old man drew his hand into his lap and turned away.

As if this is not enough, Robinson weaves in other perennial themes that have long been explored in serious fiction: race, the media, small town ethics and relationships, success and failure, the place of religion. Home is a rich work, told in deceptively simply prose but with layers of meaning that invite unhurried reflection. “It is a book unsparing in its acknowledgment of sin and unstinting in its belief in the possibility of grace,” critic A. O. Scott said in the New York Times. “It is at once hard and forgiving, bitter and joyful, fanatical and serene.”

If I seem hesitant in this review to recommend this fine novel, it is not because I doubt its literary quality, power as a story, imaginative grace-full prose, or truthfulness. I doubt none of them. Nor do I doubt the significance of the themes it addresses, of the pain of fatherlessness, the yearning for home, and the need for forgiveness. I doubt none of them, either. My hesitation comes from a very different place. If I hadn’t had to read Home for Ransom’s annual board meeting, I don’t think I could have finished it. It was simply too painful, often more painful than I thought I could bear. The reason is simple: the character I most identify with is Jack.

Note: Marilynne Robinson’s publisher has a free discussion guide available online (www.us.macmillan.com and search for Home, click on Reading Group Guide). Consider the questions listed here as a supplement to that Guide.

1. What was your initial or immediate response to Robinson’s novel? Why did you react the way you did?

2. Consider each character in turn: Rev. Robert Boughton, Glory, John Ames, Jack, Teddy. As objectively as possible, describe each one, if possible by rereading (aloud) brief sections of the book. What is the significance of each to the story?

4. With which character do you identify most readily? Why?

5. Stories like Home, along with films like The Royal Tenenbaums (2001), Lost in Translation (2003), Garden State (2004), and Look at Me (2004) suggest that the themes of searching for home and fatherlessness are very relevant themes for our culture. Do you agree? What other stories can you think of that deal with similar issues and questions? Is there a sense of cosmic homesickness expressed in people’s lives, fears, and yearnings? How is it expressed?

6. What do you know about the author? Is this of any significance to the fiction you are discussing?

7. Within the world of the story, what assumptions or statements are made about reality, morals, and the meaning of life?

8. Who is telling the story? Whose voice do you hear? Who is the narrator’s implied audience or listener? How does the relationship between the narrator and the implied listener help the reader focus on what’s important about the character(s)?

9. How does Home help you understand yourself, and others, more deeply?

10. In a world in which many are plagued with a sense of cosmic homesickness, what is the Christian response? How might some Christians respond wrongly? How might we bridge from Home to a thoughtful, winsome discussion of the biblical gospel?

11. Because the father is a minister, theology is discussed throughout the novel. What place does it have in the story? In the life of this family? How do respond to these beliefs? Why?

12. If you did not enjoy this work, is there a reason why you should encounter it anyway? Would you recommend this work of fiction to others? Why or why not? How would you describe the work—and your reaction to it—in a way that would make sense to a Christian friend? To a non-Christian friend? Do the two descriptions differ? Why? Should they?

“Return of the Prodigal” by A. O. Scott in the New York Times (September 19, 2008) available online at:
(http://www.nytimes.com/2008/09/21/books/review/Scott-t.html?pagewanted=1)
Further reading suggestions:
The Prodigal God: Recovering the heart of the Christian faith by Timothy Keller (New York NY: Dutton; 2008).
The Return of the Prodigal Son: A story of homecoming by Henri J. M. Nouwen (New York, NY: Doubleday; 1994).