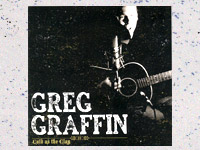 Better known as the singer/songwriter of the punk band, Bad Religion, Greg Graffin’s earliest musical memory involves singing with his family. Here Graffin joins a group of very talented folk instrumentalists to sing a set of songs, a few traditional, the rest composed by himself. There is a sharp edge to many of the lyrics, and though hope is expressed, it seems more rooted in progress than in anything beyond the horizons of time and space.

Whispers of ancients buried by dust
Echoes of ages in canyons of dust
Is heaven so lonely? I’ll know soon enough.

A songwriter’s world view is expressed in their music, and I find Cold as the Clay an intriguing album on that score. I think Graffin’s vision for life is better captured in punk, but reflecting on how he expresses himself in the folk tradition is a fascinating exercise in musical discernment.