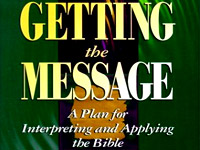 A Christian can not be truly discerning without Bible study. That’s why we sometimes refer to Ransom’s goal as helping believers gain skill in reading the world and reading the word. The two are inseparable. Neglecting Bible study, or being too busy to dig into the Scriptures is a sure way to be increasingly molded by the pressures of the surrounding culture. Which is why the apostle Paul warned that living a transformed life in this fallen world requires a mind that is being renewed (Romans 12:2).

This link between discernment and Bible study is not a new idea. Origen, a second century theologian (185-254 AD) wrote:

Our mind is renewed by the practice of wisdom and reflection on the Word of God and the spiritual understanding of his law. The more one reads the Scriptures daily and the greater one’s understanding is, the more one is renewed always and every day. I doubt whether a mind which is lazy toward the holy Scriptures and the exercise of spiritual knowledge can be renewed at all. Many people think they know what God’s will is, and they are mistaken. Those who do not have a renewed mind err and go wrong. It is not every mind but only one which is renewed and conformed (as I say) to the image of God which can tell whether what we think, say and do in particular instances is the will of God or not.

There’s another link between Bible study and cultural discernment, namely, the same basic skills are involved in both. We need, for example, to learn to observe with clarity in both cases, observing what the text actually says in Bible study, and what the movie or song or news article is saying if we’re to respond to it with discernment. Both involve learning to interpret or to unpack the meaning of what’s being communicated. And just as Bible study seeks to end up asking what the implications of the text are for life and culture, so the discerning believer seeks not just to understand the culture, but to creatively speak and live out the truth in a way that can be understood. Since parallel skills are involved, developing skill in Bible study can help us develop skill in discernment—and vice versa.

Though Bible study is important, it’s rather difficult to write about without being too scholarly or, if writing for a popular audience, too shallow. Getting the Message: A Plan for Interpreting and Applying the Bible by Daniel M. Doriani is the exception to this rule. It is scholarly, yet accessible to the average Christian. Dr. Doriani, a professor at Covenant Seminary, has long taught this material to lay believers, and so has honed his ability to explain complex concepts simply, without being simplistic.

Getting the Message is practical, seeking to impart skill in Bible study so the reader is better able to dig into the Scriptures, yet the author never loses sight of the wonder of listening to the very word of God. Doriani not only tells us how to do it, he allows us to walk with him through numerous texts so we can listen in as someone who loves the Bible reads it and seeks to understand, worship, and obey. He has also included exercises with each chapter, so the reader can practice the skills instead of merely read about them.

This is a book for serious Christians; for believers who want to know, obey, and teach God’s word. It’s not the sort of book that can be simply scanned; it needs to be worked through thoughtfully. If you have never had the opportunity to learn Bible study skills, plan to practice the skills chapter by chapter and do the exercises as you read. If you can work through it with a friend, or in a small group, so much the better, but do master these study skills. If you are fairly experienced in Bible study, Getting the Message will not only be a wonderful way to sharpen your study skills, but Doriani’s clear instruction will help you prepare to pass the skills on to others.