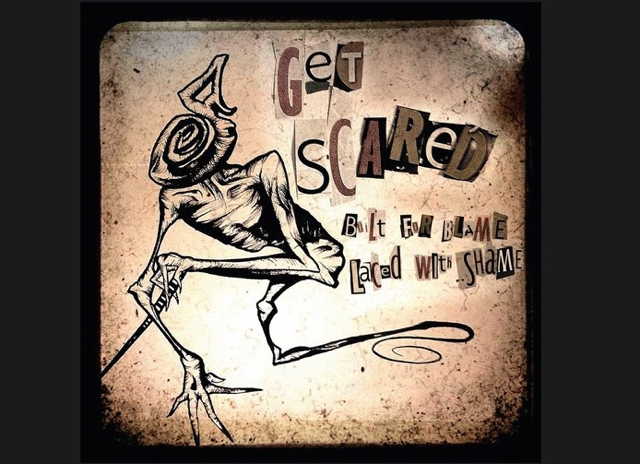 The lament of a burdened heart
Though moving is no fun, developing new friendships is. So I asked a young woman I am getting to know to recommend an album that she likes and listens to often. The band is Get Scared, she replied, and the album is Built for Blame, Laced with Shame (2012). So I bought a copy, downloaded it, and couldn’t locate the songs on my laptop—it had to do with age, she said.

Get Scared is a heavy metal Goth band, with dense, driving drums, thrashing guitars, insistent beats, and massive sound, music that is best heard very loud. This is not, however, merely angry music, though certainly rage is expressed against those who use blame and shame to wound, dismiss, and control.

Rather than an indulgent scream of rage, Built for Blame, Laced with Shame is a lament, the heart cry of someone seeking a way out of being the one who is always seen as not only in the wrong, but wrong, period.

Devils come out at night.
In the form of people that I love
They said I’m not enough. [“Start to Fall”]

Within each human heart an elaborate fabric is constantly being woven, complete with threads of deep emotion, for blessing and for curse. The fabric is inescapable, lending color and texture to how we think and do and feel and imagine. Some threads, like blame and shame, can easily dominate and then begin to feed on themselves until trust becomes impossible and hope withers and finally dies. They can take on a life of their own.

I grew up in a home where shame was used to control and to punish. Failures were never forgotten and often rehearsed to emphasize how I was a disappointment to those who loved me. So, to learn that Christ was on record not being ashamed to say he is my brother (Hebrews 2:11) was and is very difficult to believe. That he would tell others that, and even publicly “sing my praise” (2:12) is still something I have not even begun to process. I suspect that until he replaces my shame with his glory—which is the Christian hope—the full impact of it all will continue to elude me (Colossians 1:27).

Built for Blame, Laced with Shame captures the awful reality of being not merely lost in the cosmos, but of being lost within one’s own skin and soul as well. “Look, oh, look around—you’re lost,” they sing “but never found, no.” [“Cynical Skin”] When such threads are woven into the fabric of our heart we feel caught, bound by dark realities that will not let go.
Fake apologies (Fake apologies)
Can I just call it quits,
I can’t take all of this
Fighting all of me (Fighting all of me)
I want a second chance,
But I’m so broken [“Problematic”]

For those with ears to hear, there is creativity in the music of Built for Blame, Laced with Shame. A carefully crafted beauty, appropriate to the music’s genre, that hints of something better.

As the music of a heart it is very worth a listen.