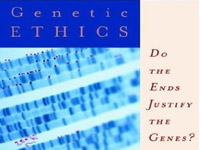 Another in a series of superb books from The Center for Bioethics and Human Dignity, Genetic Ethics is a collection of thoughtful papers that Christians concerned for medical ethics will want to add to their library.