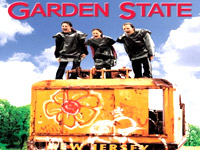 You know that point in your life when you realize the house you grew up in isn’t really your home anymore? The idea of home is gone. Maybe that’s all family really is. A group of people who miss the same imaginary place. ~Large

When Zach Braff wrote the script for this film, which he also directed, Garden State was not his first choice for the title. He wanted Large’s Ark. If you haven’t seen the film, that won’t mean much, but if you have, it will bring to mind a scene that acts as a metaphor for the entire film. It is also a metaphor which tends to define the postmodern generation.

Andrew Largeman, played by Braff, is known as “Large” to his friends. Estranged from his father, he comes home from LA where he barely exists as a waiter and would-be actor to New Jersey for the funeral of his mother. He reconnects with Mark, a high school friend, and falls in love with Sam, played with delightful quirkiness by Natalie Portman. On the last day of his visit, Mark takes Large and Sam on a quixotic but purposeful journey which ends at what seems to be the end of the world. They’re in an old rock quarry where there is a great crevasse, a seemingly bottomless crack dropping down into darkness. Perched on the very edge of the abyss is a boat. When they knock on the door, we feel a sense of dread wondering who would choose to live in such an unlikely place. The door is opened by a gentle man with a child securely held in his arms. He invites them into the warmth of his home, out of the pouring rain, where his wife serves tea, and where the three friends catch a glimpse of their lovely commitment to one another in what is the healthiest relationship depicted in the movie. Hired to guard the place, each night the man goes over the edge on ropes, exploring the crevasse. When they leave, Large, Sam, and Mark stand in the rain at the edge and scream down into the bottomless hole. “Good luck exploring the infinite abyss,” Large tells the man living in the ark. “Thanks.” he replies. “Hey, you too.”

As I watched Garden State it was hard not think of other films, each of which provides a brief glimpse into a generation. Just as The Graduate (1967), Ferris Bueller’s Day Off (1986), and Reality Bites (1994) captured something of the fears, hopes and values of a generation, so Garden State offers a window into the broken, yearning reality of the postmodern generation. Braff clearly wants us to think of The Graduate, since there are a number of allusions to the film, and the soundtrack includes Simon and Garfunkel singing a mournful “The Only Living Boy in New York.” In fact, the soundtrack is impressive—enough to make you want to purchase the CD. When Braff sent his script to people before making the film, he included a copy of the songs, all of which he had chosen.

Garden State is not a flawless film, which probably isn’t surprising since it represents Zach Braff’s writing and directorial debut. There is one scene that seems utterly gratuitous. And though the story does a good job at letting us into Large’s life, his growth as a character, which is central to the plot, has to be compressed into a time-frame that is unrealistic. Still, it’s a fine film, worth watching—a movie which seems to cry out to be discussed.

We have often stated our conviction that the postmodern generation, in its music and films, demonstrates a deep spiritual yearning. Whether that yearning is expressed as a search for meaning, or significance, or transcendence, it always seems to come down to questions about relationships: “In the end, will anyone be there, truly there, for me? Is there anyplace I can call home?” With poignancy and sly ironic wit, Garden State is about young adults asking those questions. Their yearning displays an uneasy sense of quiet desperation, since their search is framed by fragmented homes, alienated relationships, and lives made numb by the mediocrity of a culture in which no one can be sure whether hope isn’t simply a cosmic joke. The pain which Large feels deep within his soul is real, born of tragedy in the face of death. “This is life,” he says. “This is it.” “I know it hurts,” Sam replies. “But it’s life and it’s real. And sometimes it f***ing hurts, but it’s life, and it’s pretty much all we got.” As love blossoms between Large and Sam, they feel the stirring of hope. “Safe,” Large tells her, “when I’m with you I feel safe…like I’m home.”

It should come as no surprise to Christians that the postmodern generation seeks to fulfill its yearning in relationships. It’s not good to be alone, and the love between a woman and man speaks of a greater relationship which we were created to enjoy forever. The gospel invites us into that relationship, and promises a Father who hurries out to welcome us into his arms.

It should also come as no surprise if the postmodern generation doubts our Story. “You have reason to doubt it,” we can say to them, “because all around you the most significant relationships in your life have fragmented. But the Story we are telling is real. And to show it’s real, even though we will never manage it perfectly, we will prove its reality by being there for you ourselves.”

The postmodern generation is asking the right questions, but not finding answers that are sufficient. How will we respond?

1. What was your initial or immediate reaction to the film? Why did you react that way? 2. In what ways were the techniques of film-making (casting, direction, lighting, script, music, sets, action, cinematography, editing, etc.) used to get the film's message(s) across, and to make the message plausible or compelling? In what ways were they ineffective or misused? 3. What role do drugs play in the story, and in the lives of the characters? What role does casual sex play? With whom did you identify in the film? Why? With whom were we meant to identify? If you identified with none of the characters, why do you think that is? Discuss each main character and their significance to the story. Compare Garden State with The Graduate, Ferris Bueller's Day Off, and Reality Bites. How are they similar? Different? 4. What is the message(s) of the film? Consider how the film addresses themes such as: what's wrong with the world, and the solution; the fragmentation of life in our busy, pluralistic world; the significance of being human; the meaning of life; and the significance of relationships and love. 5. What is attractive here? How is it made attractive? How effectively was humor used? Discuss the impact of the musical score. What can you as a Christian affirm? What would you challenge? Why? How can we talk about these things in a winsome and creative way in our pluralistic culture? 6. Consider the ending. Some critics have thought it “too happy,” and say the film would have been stronger if it had concluded 60 seconds sooner. Do you agree? Why or why not? 7. Besides the boat/ark at the edge of the abyss, what metaphors did you see in the film? 8. To what extent do the members of the postmodern generation—as depicted by Large, Mark, and Sam—see biblical Christianity as attractive? Why? What should be our response? 9. What insight does the film give into the way postmodern people see life, meaning, and reality? How can you use the film as a useful window of insight for Christians to better understand our non-Christian friends and neighbors? 10. Might the film be a useful point of contact for discussion with non-Christians? What plans should you make? 11. How can Christians develop true incarnational friendships with a postmodern generation who are caught in such a fragmented, numbed reality?