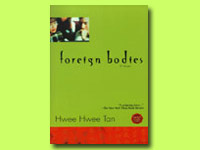 I first heard of Foreign Bodies, a novel by a young Oxford educated Singaporean writer now living in New York, in a review in re:generation. Andy Crouch, the author of the review, is editor of re:generation and on staff with InterVarsity Fellowship at Harvard. What he wrote so piqued my interest, I logged on and ordered a copy of Hwee Hwee Tan’s book.

Foreign Bodies “is an astonishing first novel that can best be described,” he wrote, “as a cross between Douglas Coupland and Gerard Manley Hopkins.” If you are unfamiliar with these two names, suffice it to say that seeing them linked like this is hardly a common occurrence. Coupland is the quintessential postmodern author known primarily for his books Generation X (1991) and Life After God (1994): “ME-ISM: A search by an individual, in the absence of training in traditional religious tenets, to formulate a personally tailored religion by himself. Most frequently a mishmash of reincarnation, personal dialogue with a nebulously defined god figure, naturalism, and karmic eye-for-eye attitudes.”

Hopkins (1844-1889), on the other hand, was a Jesuit poet for whom the transcendence and glory of God defined all of life and reality:

Unlikely as this comparison seems, Crouch is correct: Foreign Bodies is a postmodern novel in which the transcendence of God in the gospel of Jesus breaks through into the lives of its characters, bringing hope and redemption.

As Crouch acknowledges, however, the comparison with Hopkins is not fully apt, since Foreign Bodies is not a Catholic, but rather a Protestant story. “If Douglas Coupland’s characters embody life after God departs, these characters embody life after God arrives,” Crouch says. “I will give this book to my non-believing friends to explain what being ‘born again’ means, and I will return many times to the high points of Tan’s narrative to be reminded myself.”

The story in Foreign Bodies has three main characters, and each chapter is written from the perspective of either Mei, Andy, or Eugene. Andy is accused of masterminding a gambling ring in Singapore, and Mei, an attorney, has nine days to prove his innocence. Eugene, a friend from the Netherlands, flies in to be with them. Foreign Bodies is not merely about a search for justice; it’s about the big questions of life, the search for significance and relationship in a world in which the wages of sin—our own, and our father’s—seem, at times, to strangle hope. And then, against all odds, the gospel brings redemption and hope, even in the midst of dark times.

Foreign Bodies is a good read, witty and insightful, and though in a style that may not appeal to every reader, is written by someone who clearly loves to write well. For example, Mei’s mother hosts karaoke parties for her middle-aged friends in their flat. “Trust me,” Mei says, “you haven’t seen something truly Satanic until you’ve seen your mother belting out ‘Chain Reaction’ complete with Diana Ross hand actions and bum wiggles.” With Hwee Hwee Tan’s characters we are brought into the world of the postmodern generation, with its unfailing sense of irony and love of pop culture. And once there, we discover once again how much God loves the world.