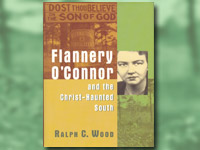 “Ever since there has been such things as novels, the world has been flooded with bad fiction for which the religious impulse has been responsible. The sorry religious novel comes about when the writer supposes that because of his belief, he is somehow dispensed from the obligation to penetrate concrete reality.” – Flannery O’Connor in “Novelist and Believer.”

Faith, mystery, and the grotesque
Flannery O’Connor lived a brief life, with long periods of illness, but in the few short years allotted to her she was faithful to the gift she had been given. “There is no excuse for anyone to write fiction for public consumption,” she said, “unless he has been called to do so by the presence of a gift. It is the nature of fiction not to be good unless it is good in itself.” Her stories sear our imaginations, and reveal a profoundly Christian mind at work. As a committed Roman Catholic, O’Connor abhorred the secular nihilism eating away at the modern world, and saw her stories as her opportunity to witness to the truth of reality.

Each O’Connor story is a carefully crafted piece of literature. Each also contains some glimpse of mystery, a surprising hint of transcendence that usually appears in a way we would least expect. Grace is not, however, the thing many readers notice first, since O’Connor’s stories also contain startling images of the grotesque. What we call grotesque she called realism—and was designed to shock smugly complacent readers with the news that something is horribly wrong with the world and with us, and that we can’t solve the problem on our own.

In Flannery O’Connor and the Christ-Haunted South, Baylor University professor of theology and literature Ralph C. Wood provides a scholarly study of O’Connor’s life, work, and the Southern culture in which she lived. He has a deep appreciation for O’Connor’s stories, but what motivates him to write is deeper than merely the desire to publish literary criticism. “I believe that the church,” Wood asserts, “altogether as much as the secular world, requires the awakening jolt of O’Connor’s fiction. Most Christian communities have failed to embody, in both worship and witness, their own saving alternative to out ‘terrible world.’ They have lost what is repeatedly found in O’Connor’s fiction: the glad news that God’s goodness is even more shocking than our violations of it.” The book is a study of O’Connor’s fiction, but set within a theological assessment of American society so that we can better hear what O’Connor had to say, both to her own day, and to ours.

Wood structures Flannery O’Connor and the Christ-Haunted South around a series of themes: race and racism, Southern fundamentalism, the modern embrace of nihilism, preaching as a Protestant sacrament, the vocation and nature of writing fiction, and O’Connor’s distinctly Christian vision of life, reality, and the life to come. “This book,” Wood says in his Introduction, “seeks to demonstrate the immense social and religious relevance of Flannery O’Connor’s work. It does not offer yet another close literary examination of O’Connor’s individual stories and novels. Nor is it an attempt to set forth, in a systematic way, the theological vision embodied in her fiction. On the contrary, this is a study of O’Connor’s work as it bears on the life of the contemporary church and one of its regional cultures, specifically the church that is situated in her own native realm—the Christ-haunted South.”

If, however, you have read little or nothing of Flannery O’Connor’s fiction, please begin by correcting that lack. Her fiction—short stories and novels—are available in a number of editions, including The Complete Stories. We have often used short stories like “Greenleaf,” “A Good Man is Hard to Find,” “The Lame Shall Enter First,” and “The Enduring Chill” in small group discussions. Each is so keenly crafted and provocatively imagined that discussion errupts naturally.

There are numerous short story writers who are worth reading, but the stories of Flannery O’Connor seem in a class of their own. Her stories burn themselves into my memory, refusing to fade quietly away as if they didn’t matter, since, after all, they are only stories. She wrote as if her life depended on it, which of course it did. “Story-writers are always talking about what makes a story ‘work,’” she said. “From my own experience in trying to make stories ‘work,’ I have discovered that what is needed is an action that is totally unexpected, yet totally believable, and I have found that, for me, this is always an action which indicates that grace has been offered. And frequently it is an action in which the devil has been the unwilling instrument of grace. This is not a piece of knowledge that I consciously put into my stories; it is a discovery that I get out of them. I have found, in short, from reading my own writing, that my subject in fiction is the action of grace in territory held largely by the devil. I have also found that what I write is read by an audience which puts little stock either in grace or the devil. You discover your audience at the same time and in the same way that you discover your subject; but it is an added blow.”

Flannery O’Connor’s occasional prose pieces, mostly speeches (Mystery and Manners) and her collected letters (The Habit of Being) have also been published. Readers who love her fiction find both a treasure-chest of insight into a highly gifted woman whose remarkable imagination, deep faith, courage, and thoughtfulness is a demonstration of Christian faithfulness in crafting fiction which, I have little doubt, will stand the test of time.