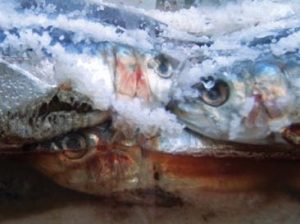 An issue of Food and Wine included a recipe for Thai fish sauce. I read it because I like Thai food, at least the food that is advertised as Thai here in the upper Midwest, which I suppose may not be like the food served in Bangkok, which I’ve never visited, but still, it’s good. The article explained that fish sauce lends an essential yet subtle depth of salty pungent flavor to Thai dishes, a characteristic we identify as quintessential Thai. That sounds right to me, but then I couldn’t have come up with it on my own.

In any case, the recipe is a very simple process, though I think it’s doubtful many people will begin making it at home. Here it is, in three easy steps:

1. Catch, rinse and drain black anchovies.
2. Layer with sea salt in barrels or clay pots.
3. Weigh down the fish with rocks and let ferment in the sun. Drain off the resulting fish sauce one year later.

I am not often rendered speechless, but that did it for me. I mean, please tell me who, in a land as blisteringly hot and humid as Thailand came up with the idea of keeping fish in the sun for a year—a year!—and then imagined the runoff could possibly be considered edible, and then actually risked their health—if not their life—by trying it. Don’t get me wrong: I’m delighted they tried it, but really.

Or consider making mayonnaise. This is something people do make at home—we do it and love the homemade version. However, the crucial step involves slowly, so slowly pouring a tiny stream of oil into raw egg yoke while whisking steadily until eventually, after a long period of whisking, the mixture changes from a mess of oily egg yoke into mayonnaise. The question that comes to mind is the same as with the fish sauce: who would have thought to do it?

Now, if mayonnaise was developed when electric blenders were available it would be easier to understand, but the first mention of mayonnaise is dated to the beginning of the 19th century. That meant whoever developed it had to stand and whisk furiously and keep whisking until the change occurs. Who would have done that, and why?

I know: perhaps if I were a cook these things wouldn’t amaze me. But I’m not, so they do.

The solution, I suppose, is in my last sentence, that things like this would occur only to a culinary artist, professional or amateur, someone who is not merely skilled in cooking but whose creative insight into food permits them to produce something that is beyond all they know. Like a writer whose story includes interwoven themes beyond what they had planned in their initial outline. Or a painter whose canvas shows not only the imagined image but serves to evoke memories in viewers beyond the artist’s imagining.

Human creativity, even in ordinary things, is more mysterious than we imagine. It does not appear only in extraordinary circumstances to extraordinary people. Sometimes it is hidden in ordinary people doing ordinary things, like leaving fish out in the sun for a year or someone refusing to stop whisking oily egg yokes. Sometimes what happens is beyond all we could possibly know or expect.