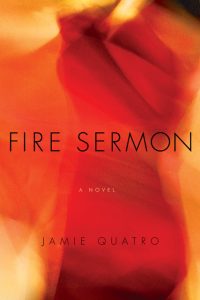 The depths of desire
I have read a lot of good novels over the years, stories that captured my imagination, drawing me into a fictional world that became so real I regretted leaving it when I reached the final page. Such novels always change me though the changes may be so subtle I don’t notice them at the time. Perhaps my perspective is broadened just a bit, or my emotions deepened, or my thinking expanded. Occasionally, very rarely but very wonderfully, a novel draws me in so deeply I am wrenched apart by the tension in the narrative, and in the end must pause and seek recovery. A story birthed in the imagination of a writer that so entranced my imagination that I was swept into a deeper understanding of being human. Such was my experience in reading Fire Sermon by Jamie Quatro.

The plot is simple, almost mundane. Maggie loves her family and God, and then meets James, with whom a platonic friendship blossoms into more than it should. It is a deeply human story, its power the reason there are so many stories of sexual misadventure recorded in Holy Scripture. Sadly, Christians tend to skim over and moralize such texts.

Fire Sermon is about desire and lust, love and temptation, faith and sin, faithfulness and infidelity, theology and sexuality, forgiveness and guilt. If you read her first book, I Want to Show You More (2013), a collection of short stories, you will recognize the themes. There is much to discuss woven into the Fire Sermon narrative, including a powerful understanding of the inner relationship between marriage and the object of our deepest desire. Jamie Quatro is like Nathan who told David a story so he would face the sad reality of his own life and choices. She is telling us a story, and in hearing it we face the reality of our desires.

Shut it down, says Head.
Continue on, says Heart.
Deluded Heart, you’ll only make a mess.
Deluded Head, any mess, will be worth it.
You will watch fire consume everything you care about. You will be left with ash—the proper
and only end of any burning.
Think of Moses. His vision in the desert. A bush on fire yet unconsumed.
Think of Letters of John Newton: the burning bush is an emblem applicable to the state of a
Christian when she is in the fire of temptation. Think of Job, the true cause of his uncommon
sufferings. Think how the experiment played upon him answered many good purposes: Job was
humbled yet approved; his friends were instructed; the wisdom and mercy of the Lord, in his
darkest dispensations, were gloriously—
Job is bullshit. Job lost everything.
Who are we to question God’s ways, says Head. Who are you—
I want what I want, says Heart. [p. 37]

Reading Fire Sermon is to be drawn into a world we know well, because it is the world into which we were born, the world that we still inhabit. A world where internal conversations for the believer reference C. S. Lewis and scripture and then too easily morph into both prayer and rationalization, where finding the thin, invisible line dividing desire from sin is a heart-wrenching quest for righteousness. As I read Fire Sermon I received new clarity about my own heart and head, about my own desire and devotion and why it is impossible to separate them for easy management.

At a couple of spots in Fire Sermon I wondered about some of Quatro’s prose, but not enough to be deflected in my reading. And I am uncertain whether the novel or the short story should be her preferred form for her writing. This much is certain: whatever she publishes next I will eagerly purchase and read.

I recommend Fire Sermon. Not just because it is a good story but also because reading it will be good for your soul.