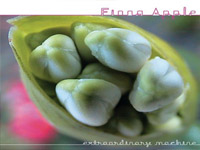 Soon after Fiona Apple’s third CD, Extraordinary Machine was released, Travis Scott phoned to say it was extraordinary. I’ve learned to trust Travis when it comes to popular music; he doesn’t just listen to popular music, he listens Christianly. So, I bought it and thought I wouldd use it as background music as I answered some emails that had languished for. Let’s just say they’d languished in my inbox. Before the first song—the title song—was half over, however, I pulled the liner notes from the CD case and forgot the guilt I was feeling about being behind in correspondence.

Apple’s music is intensely personal, an invitation to hear the longings and sorrows of her heart. Her story is not identical to mine, but we share the same brokenness, the same humanness, the sense that life’s not the way it was intended to be—and that is where the connection is made.

I certainly haven’t been shopping for any new shoes
I certainly haven’t been spreading myself around
I still only travel by foot and by foot, it’s a slow climb,
But I’m good at being uncomfortable, so
I can’t stop changing all the time
I seem to you to seek a new disaster every day
You deem me due to clean my view and be at piece and lay
I mean to prove I mean to move in my own way, and say,
I’ve been getting along for long before you came into the play
I am the baby of the family, it happens, so
Everybody cares and wears the sheeps’ clothes
While they chaperone
Curious, you looking down your nose at me, while you appease
Courteous, to try and help—but let me set your
Mind at ease
If there was a better way to go then it would find me
I can’t help it, the road just rolls out behind me
Be kind to me, or treat me mean
I’ll make the most of it, I’m an extraordinary machine
[From “Extraordinary Machine”]

Apple’s “nuanced delivery,” one critic says, “sticks the knife in, but slowly. It’s both charming and devastating.” Her voice draws us in, expressive, alternately sultry, hurt, and angry, with a beautiful clarity that fits the arrangements. Rolling Stone (#990/991) chose Extraordinary Machine as one of the best records of 2005, calling it “a classic breakup record that maintains deep emotional undertow without ever getting lost in misery.” Many of the songs, apparently, were composed after Apple’s relationship with Paul Thomas Anderson, director and writer of the film Magnolia, came to an end. There is little to distract us, and we hear clear traces of the hip hop and jazz that influenced her. Apple uses her voice effectively to express both the weariness of the disappointment that plagues life and fuels the yearning for something more permanent. (For Apple fans: the debate over whether the bootlegged version is better is an unfortunate diversion. “I think that the Mike Elizondo version [the official CD] is more pared down,” she told Paste magazine, “it’s closer to what it sounds like when I just play the piano and sing them, rather than having a lot of different instruments around.”)

Even in a world where relationships are fragile and easily broken, and in a culture where they are so tenuous no one expects them to last, human beings are simply incapable of walking away. We instinctively knowing that aloneness is far worse. It is as if the Creator’s declaration, “It is not good” to be alone is branded into our souls.

We may feel near despair, yet somehow love holds out promise, and relationships still beckon as potential carriers of grace. Which is why it cuts so deeply when someone treats us selfishly, using us to meet their needs without really caring.

I’m undecided about you again
Mightn’t be right that you’re not here
it’s double-sided, cause I ruined it all
But also saved myself, by never believing you, Dear
Everything good, I deem too good to be true
Everything else is just a bore
Everything I have to look forward to
Has a pretty painful and very imposing before
O’ Sailor, why’d you do it
What’d you do that for
Saying there’s nothing to it
And then letting it go by the boards
[From “O Sailor”]

In our humanity we mirror God’s image, so we can not endure our fallenness and mourn it, for we were made to be whole. St Paul says all creation groans under the abnormality, and Apple deftly translates that inchoate cry into music.

The weariness of our fallenness can be so great that “please please please” is the most eloquent prayer we can muster. I feel that, keenly, especially when God seems absent, content to remain silent in those interminable periods between evidences of grace.

“Apple, who is twenty-eight,” The New Yorker notes, “is as musically sure-footed as she is emotionally labile. Extraordinary Machine is the confident extension of a rich and original musical language that she has been carefully fashioning for the past decade.” The CD is a finely crafted musical exposition of Fiona Apple’s world, but don’t be surprised if it seems somehow, strangely familiar. The question is not whether we live there too, because we do. The question is whether we are willing to embrace the brokenness of those going nowhere, as Christ embraced ours.