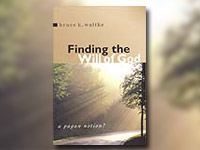 If there is one thing that most Christian want to know, it is what God’s will is for their lives. The topic usually arises especially when a decision needs to be made, when people have reached a fork in the road and need to make a choice. Is it God’s will for me to go to college? Which college is God’s will for me? Does God want me to accept this job offer? How can I determine whether God would have us move, or stay where we are?

Complicating matters are some of the testimonies we hear. Christians claim to have found God’s will and then had it confirmed in how things worked out so beautifully for them. Anyone who is going through hard times can find themselves wondering if they’ve somehow stepped off the path, if what they had thought was God’s will for them actually wasn’t. So, we try to follow the pattern of finding God’s will that these other people used, and hope that will bring some assurance, if not clarity, to our lives and hearts.

“What does it mean to ‘find’ God’s will?” asks Bruce Waltke, a professor at Reformed Theological Seminary (Orlando, FL). A pretty basic, common enough question, but his answer might be surprising, indeed. “The word ‘finding’ we normally use in the sense of learning or obtaining or attaining to God’s mind. When we seek to ‘find’ God’s will, we are attempting to discover hidden knowledge by supernatural activity. If we are going to find his will on one specific choice, we will have to penetrate the divine mind to get his decision. “Finding’ in this sense is really a form of divination. The idea was common in pagan religions.”

Now, if that is a bit stunning, read on, and be stunned some more:

“Pagans devised all sorts of special tasks to help them determine the mind of God. Each of these tasks included searching for some special sign given by the gods. The most popular was hepatoscopy, the study of the liver. Pagans believed that memory and intelligence resided in the liver, not the brain, and they created an entire course of study to read livers. The liver was the heaviest organ, and therefore if God was going to reveal His mind to man He would do so through the heaviest and supposedly most important organ…

“The ancient priests would sacrifice a sheep, and ‘read’ the liver’s shape to see what God had to say to them, much as a carnival gypsy might read your palm at the fair. One of the greatest kings of Assyria, Ashurbanipal, spent much of his life studying livers in order to divine the will of his god. Most of the ancient texts offer explanations for reading the liver of a sacrificed animal, and they include special notations for encountering unique situations.

“The ancients saw hepatoscopy as being particularly important, especially in times of war or famine. It was not unusual for a team of priests to slaughter a dozen sheep and study their livers, hoping to find similar signs in several animals. They felt that the use of many livers, with the work being done by a number of different priests, assured them of a measure of certainty in their work.

“As silly as it may seem to us now, this was common practice. The people put much faith in hepatoscopy because they all recognized that there is a God, and they all wanted to communicate with Him. Since the shedding of blood and the very thought of life was wrapped up in a sacrifice, they thought it would offer them a sign from God. It was certainly more bloody, but theoretically not much different, than a modern man or woman who asks God for a sign to guide them. Both are methods of divination that require God to work in a miraculous way to reveal His will.”

After reviewing how pagans sought to find God’s will and how God communicated to his people in the Old Testament, Waltke outlines a biblical understanding of the topic in the second half of this brief, practical book. He points out that there is not a single instance in the New Testament where God intervenes “in response to seeking his will in a perplexing situation.” Not once. Instead, he says, God calls us to something far richer, more gracious, and amazingly wonderful: a living, ever growing relationship with himself and his word which increasingly changes us into the very image of Christ.

“If we are committed to the ‘way’ of Jesus Christ,” Waltke concludes, “a way that compels the transformation of lives and cultures into a conformity with the ultimate realities with God, our theology (what we believe about God) will shape our lives (how we live for God). As we are led by the Spirit into a fuller understanding of him, we experience what Scripture calls ‘the will of God.’”

We commend Finding the Will of God to you. Though it does not include discussion questions, as the quotes in this review suggests, discussion will probably follow pretty naturally from reading it. Accessible and clearly written, it is a book that points out common errors only to point to a better way. When Jeremiah wrote the exiles in Babylon about how they were to live faithfully in that pagan city, he told them they needed to be discerning (29:8-9). Discerning, that is, not about Babylonian ideas and values (which were obviously problematic), but about false ideas and teachers within their own community who would lead them astray. There are myriad teachings within the church about “how to find God’s will,” and Waltke’s book suggests we need to be discerning about them.